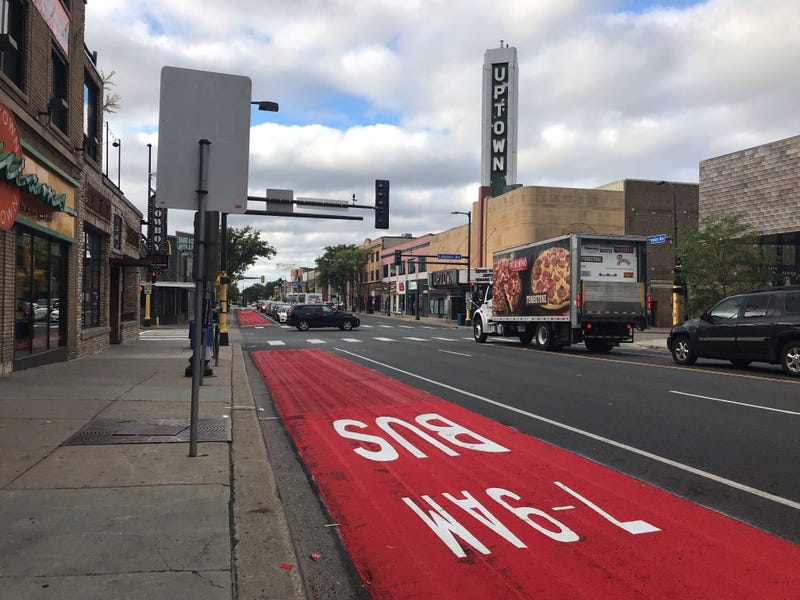 Officials from Metro Transit and the City of Minneapolis celebrated the debut of the new lanes Friday morning at the Uptown Transit Station.

"Right now, this corridor gets 400 buses on a daily basis during the week carrying 3,300 people," Minneapolis mayor Jacob Frey said. "If we make it just a little bit more efficient, it goes a really long way."

The lanes will be utilized Monday-Friday between 7 and 9 a.m. and are supported by the City's participation in the American Cities Climate Challenge. Minneapolis, along with 25 other cities, are part of the two-year acceleration program providing ities new resources to tackle carbon reduction goals.

"In the longterm, this matters in our city's efforts to fight climate change," Bender said. "We're already seeing more flooding in our city as direct result of greenhouse gas emitions and climate change. We need to do everything we can."

The Uptown bus lanes join already implemented lanes on southbound Chicago Avenue, from East 28th Street to the Chicago/Lake Transit Center. Piloted lanes on portions of Nicollet Avenue, between Lake Street and Franklin Avenue, will be installed later this fall.

If anything, the new bus-only lanes on Hennepin Avenue, between Franklin Avenue and Lake Street, should help the flow of traffic.

According to Metro Transit, Hennepin Avenue is also one of the slowest corridors in the region. During the rush hour, transit speeds regularly slow to 6 mph. There is also a high level of variability of traffic flow along Hennepin Avenue, particularly when there are delays on I-94.