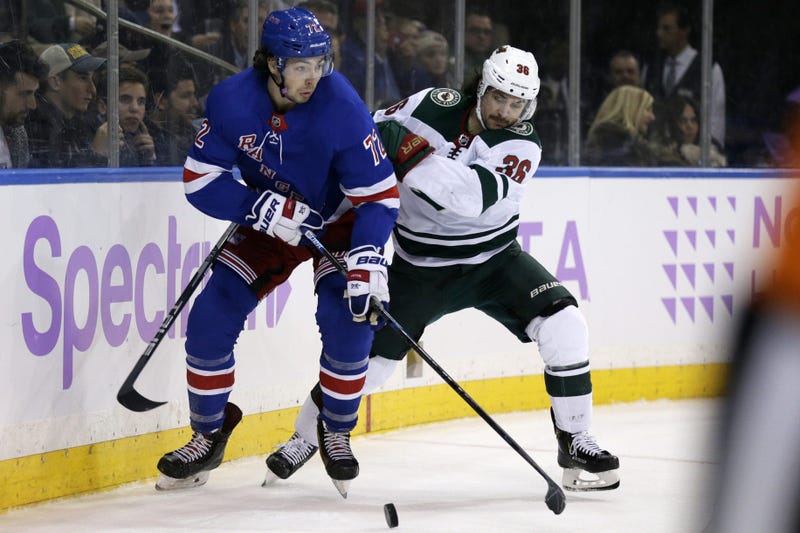 ST. PAUL, Minn. -- Mika Zibanejad scored with 1:06 to play in regulation to send it to overtime and then had a goal in the shootout, helping the New York Rangers erase a two-goal deficit in the third period and beat the Wild 4-3 on Thursday night.

Trailing 3-2, New York pulled goalie Alexandar Georgiev with 1:41 remaining for an extra skater and the move paid off when Zibanejad’s 24th goal of the season tied it. His redirection caught Alex Stalock out of position and sneaked between the Wild goalie's skate and the post.

“I didn't even know if it was going to make it to the net, to be honest with you,” Zibanejad said. “It was a hard pass. I just tried redirecting it. I don't think he saw it.”

After a scoreless overtime, Zibanejad beat Stalock with a backhander in the shootout. Artemi Panarin also scored to clinch New York's first shootout win of the season.

The Rangers entered the game 1-17-0 when trailing after two periods.

“We just never quit,” Rangers coach David Quinn said. “We've been talking about the fact that the belief we have in each other continues to grow throughout the season. It was never more evident than it was tonight.”

Panarin added a goal in regulation, as did Pavel Buchnevich. Georgiev stopped 23 shots as the Rangers won their third straight.

“This is the type of win you want to kind of build on,” Rangers center Ryan Strome said. "Hopefully we can keep it going."

Ryan Donato, Jonas Brodin and Jordan Greenway scored for Minnesota, which led 3-1 until midway through the third period.

“Whatever we were doing obviously wasn't enough,” Greenway said. “We didn't do what we did in the first and second period.”

New York pulled to within a goal at 3-2 when Buchnevich scored at 11:51 of the third. The puck bounced around in front of the net before eventually finding its way past Stalock.

Donato opened the scoring for Minnesota with a backhander that went through the legs of a Rangers defenseman and past Georgiev.

New York answered when Panarin temporarily tied it with a first-period goal, his team-leading 29th of the season.

Brodin scored his first goal since Nov. 19 to put Minnesota back ahead 2-1 in the first. It was just Brodin’s second goal of the season.

Minnesota appeared to add to its lead midway through the second period when Matt Dumba's shot fluttered through traffic and into the net. But New York challenged the goal, which was eventually waved off for goalie interference.

“They said he had enough time to get out of the way,” Wild coach Bruce Boudreau said. “I thought he was pushed in when he was in the crease, and when you're skating that's a difficult thing.”

The Wild got the goal back later in the second when Greenway deflected a shot from Brodin to send it past Georgiev. The assist gave Brodin his first multi-point game since Dec. 14.

Minnesota went 0 for 2 on the power play. New York has not allowed a power-play goal in its last four games.

Stalock made a glove save of defenseman Jacob Trouba in the final minute of overtime to keep the game alive. Stalock finished with 28 saves.

NOTES: Wild C Mikko Koivu got his 500th career assist on Donato’s first-period goal. ... Minnesota’s opponents are 4 for 5 on coaches' challenges this season.