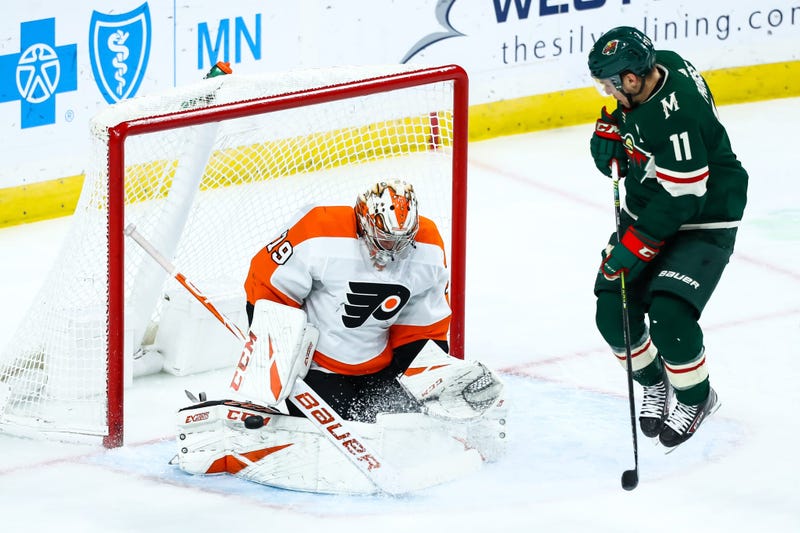 Zach Parise and Carson Soucy also scored for Minnesota, which is 9-0-3 in its past 12 games at Xcel Energy Center. Only Boston (17) and the New York Islanders (currently at 13) have longer home point streaks this season.

“Every year this team’s been in the league they’ve had one of the best home records in the league. We had one really bad year and now that we’re back on track is more of what was normal than what was abnormal,” coach Bruce Boudreau said.

Near the bottom of the league after winning just six of their first 18 games, the Wild are 10-1-4 in their last 15.

“I think everyone’s just buying in. We feel comfortable now,” defenseman Ryan Suter said. “The new guys, usually it takes a few games, 20 games or so, to get used to the system and get used to playing with each other.”

James van Riemsdyk scored and Carter Hart made 24 saves for Philadelphia. The Flyers have dropped three of four after winning five straight and lost back-to-back games for the first time since Oct. 27-29.

This was Philadelphia’s first game since it was announced that Oskar Lindblom has been diagnosed with Ewing’s sarcoma, a rare type of bone cancer. Lindblom’s jersey hung in his stall before the game. Before the game, many players talked about winning for their teammate.

Tied with Travis Konecny with a team-best 11 goals, Lindblom is expected to miss the rest of the season. Konecny missed his second straight game with a concussion.

The Philadelphia bench was thinner in the final two periods after centers Scott Laughton and Tyler Pitlick left. No updates were available for either player; however, coach Alain Vigneault expects some call-ups from Lehigh Valley of the AHL in time for Sunday’s game in Winnipeg.

“The only thing we can do is what’s in our control, prepare those guys, whoever’s coming,” defenseman Shayne Gostisbehere said. “We need two points bad.”

“We just had a few plays right there that we needed to execute. A lot of those players it was our most skilled players. They need to find a way to come through for us,” he said.

Down 1-0 after van Riemsdyk’s early goal, Parise scored on a redirect and Staal found the net on a rebound less than two minutes apart before the midway point of the period for a 2-1 Wild lead.

Staal’s second-period goal came from the left circle and squeezed through traffic before trickling past Hart.

Staal, who leads Minnesota with 26 points and is sitting on 999 career points, has three goals and an assist in his past two games.

Banged up a bit early, Staal had two assists in the team’s first eight games.

“I’ve never made any excuses,” he said. “I knew I needed to be better as a whole and I felt like as a group we also collectively dug in and everyone committed to getting this ship back in the right direction.”

NOTES: Stalock finished with 17 saves. ... Wild C Joel Eriksson Ek left the game in the second period, but he has not been ruled out for Sunday. ... G Devan Dubnyk, out since Nov. 16 as his wife deals with a medical situation, took part in the morning skate and is expected to be on Minnesota’s upcoming three-game trip. C Mikko Koivu (lower body) and D Jared Spurgeon (hand) are also going on the trip. Both were injured Dec. 3. ... This was the first of five games in eight days — and six in 10 — for the Flyers. Philadelphia played once in the previous six days.

The Wild are at Chicago on Sunday.