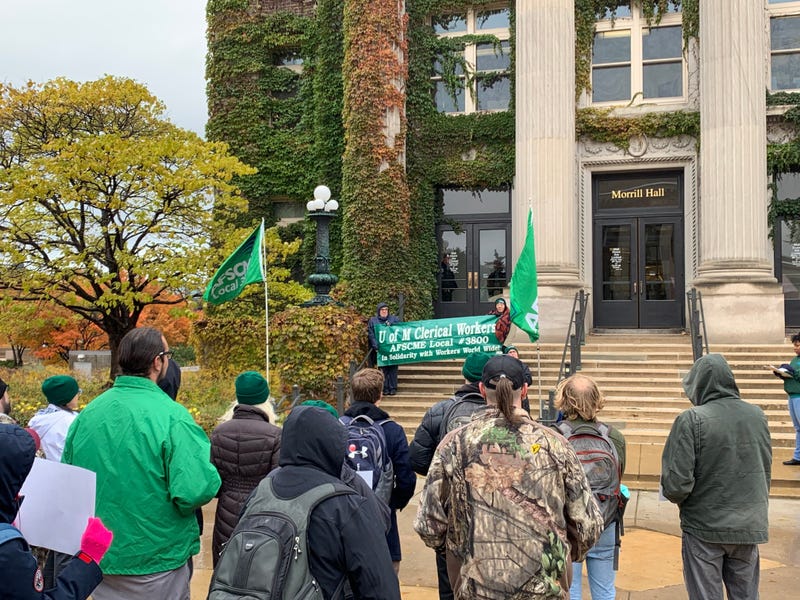 Chants of "cut from the top" and those demanding new contracts echoed off the walls of buildings filled with students.

Cherrene Horazuk's the president of AFSCME 3800, representing clerical worker at the U of MN.

"It's time that the University recognizes the primarily female workforce that does the behind the scenes work to make this university run," Horazuk said.

Horazuk says they're still working on language from the 2009 agreement regarding the pay scale.

"At this point it take 27 years to get to the top of the pay scale," she said. "At this point, someone can work their entire career and never get there."

Supporters at the rally gathered on the steps of Morrill Hall, which houses the office of UMN president Joan Gabel.

Speakers like Nicole Masika took turns sharing their stories in hopes of having their voices heard. Masika detailed her battle with health insurance.

"Certain costs are covered and others are not," Masika said. "I had to start a GoFundMe campaign to pay additional costs because my reserves were depleted earlier this year."

Negotiations have been ongoing since June. 30 miles east, UAW members in Hudson, Wisconsin entered their 37th day of striking against GM. Steve Frisque and a few other showed up from the UAW picket line to support the rally in Minneapolis.

"They've been there for us," Frisque said. "It's our duty to be there for them."

Cold and rainy afternoon for the U of M clerical workers rally demanding better wages and contracts. pic.twitter.com/8E7y1kPZvV

"We have an obligation to use tools at our disposal, including tax policy, to address runaway, unsustainable, unethical, and unjust wealth and income inequality in this country," Rep. Gomez said. "Anytime people recognize our collective power and stand together it's like we're buildling towards something bigger."

Horazuk hasn't heard of any concrete plans to settle a new contract moving forward, but believes progress is being made under University of Minnesota president Joan Gabel.