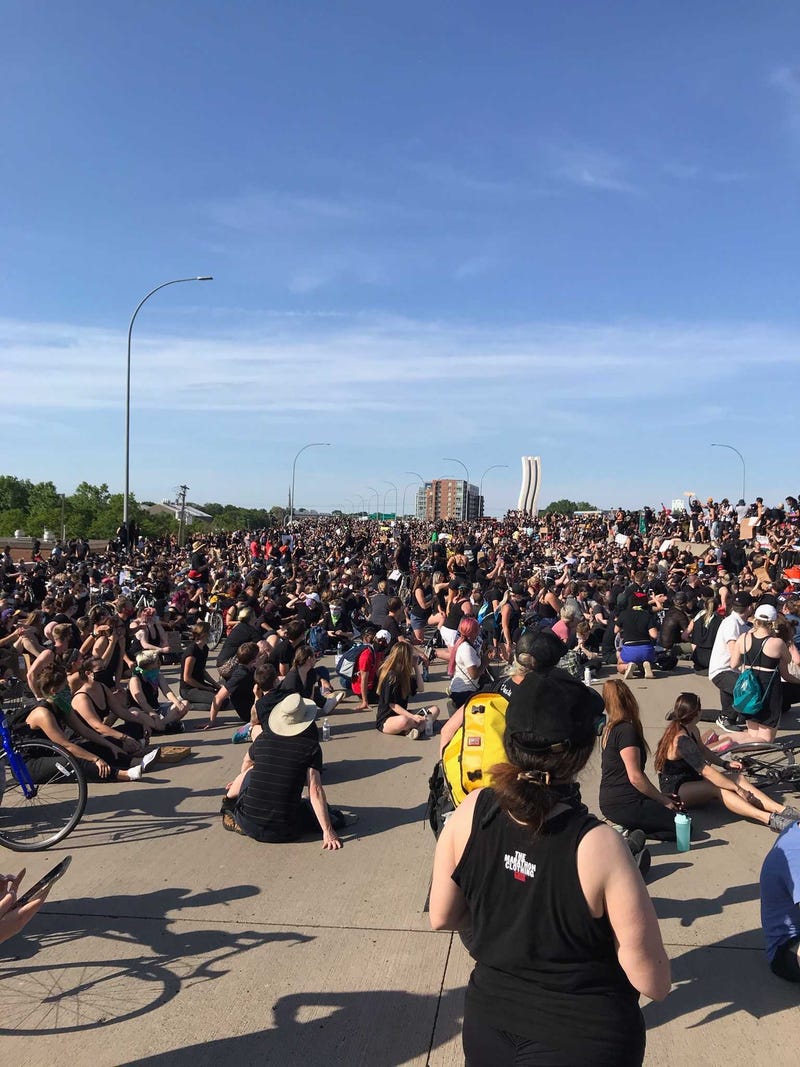 (WCCO) We're learning more information about that terrifying sight yesterday -- an 18-wheeled fuel-tanker speeding toward thousands of protesters on the 35W bridge. The driver, identified as Bogdan Vechirko of Otsego, is in custody.

His motives are not clear, but Public Safety Commissioner John Harrington says he may have panicked as he was already on 35W when the freeway was closed. The tanker was empty.

As protesters gathered on highway I-35 W in Minneapolis Sunday night, marking the sixth straight night of protests, the tanker truck drove through the crowd, shocking onlookers and participants in the otherwise peaceful display.

Highway cameras show the truck moving at high speeds towards a crowd of thousands of protesters. Multiple witnesses say the truck driver was honking his horn to get the attention of the protesters as he seemed to be attempting to plow into them.

A witness was taking video of the incident as it occurred. It shows that before the truck was slowed down by protesters, the driver was pulled out of the cab by the crowd.

I can't believe this pic.twitter.com/TRnJzyJshd

As protesters continued to gather all around the semi-truck, Minneapolis police moved in and cleared the bridge using flash bangs and tear gas to disperse the crowd.

Gov. Tim Walz and Commissioner Snell both expressed their amazement and gratitude that the tanker truck didn’t hit any of the protestors on the highway.

Commissioner Snell said the truck must have gotten around the barricades where they were in the process of diverting traffic off the highway. There was no law enforcement presence close to the protestors, as they were remaining peaceful. Law enforcement found it prudent to leave the protesters with some space so as not to escalate tensions, Snell said.

The estimated speed of the truck was near 70 miles per hour, which would have made it difficult for any law enforcement members to apprehend or slow the truck, even if they were within a reasonable distance of the truck, Snell said.

Shot of activity Northbound 35 on Riverbridge where 18 wheeler tried to move through the crowd pic.twitter.com/3eevR5iBX5

The driver has been arrested, according to the Minnesota Department of Public Safety. The Minnesota Department of Public Safety, which referred to the act as “very disturbing,” said the truck driver was injured and taken to the hospital with non-life threatening injuries. They also reported that it did not seem as though anyone was hit by the truck.

Very disturbing actions by a truck driver on I-35W, inciting a crowd of peaceful demonstrators. The truck driver was injured & taken to a hospital with non-life threatening injuries. He is under arrest. It doesn’t appear any protesters were hit by the truck. #MACCMN

The bridge was shut down to traffic at 5 p.m. after MnDot announced their plan to shut down highways in and out of the city 15 minutes prior to the curfew going into effect, i the city's attempt to curb the destruction that began when George Floyd was killed exactly a week ago at the hands of a white officer. Derek Chauvin was charged with third-degree murder after video surfaced of Floyd begging for his life for eight minutes while Chauvin knelt on his neck in broad daylight on a city sidewalk during an arrest for a minor offense.