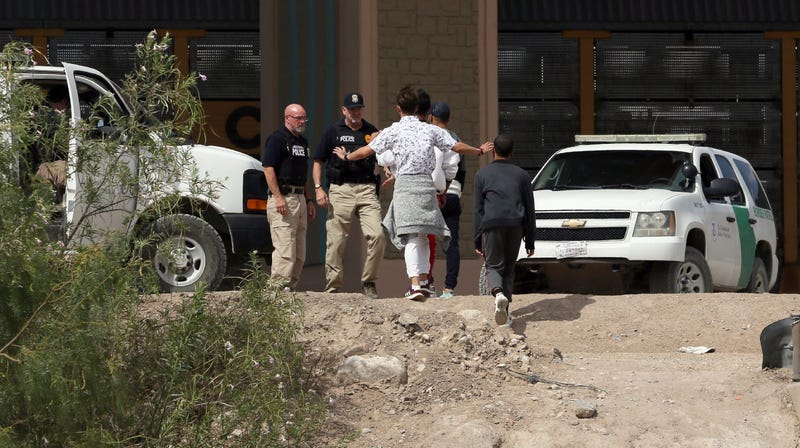 WASHINGTON (AP) — The Trump administration said Monday it will end asylum protections for most migrants who arrive at the U.S.-Mexico border in a major escalation of the president's battle to tamp down immigration.

According to a new rule published in the Federal Register , asylum seekers who pass through another country first will be ineligible for asylum at the U.S. southern border. The rule, expected to go into effect Tuesday, also applies to children who have crossed the border alone.

The rule applies to anyone arriving at the U.S.-Mexico border. Sometimes asylum seekers from Africa , Cuba or Haiti and other continents arrive there, but the vast majority of migrants arriving recently come from Central America .

There are some exceptions, including for victims of human trafficking and asylum-seekers who were denied protection in a country. If the country the migrant passed through did not sign one of the major international treaties governing how refugees are managed (though most Western countries signed them) a migrant could still apply for U.S. asylum.

But the move by President Donald Trump's administration, even if blocked by courts, is reversing decades of U.S. policy on how refugees are treated and marks an escalation even compared to other hardline efforts meant to choke off the flow of people from poor and war torn nations.

Attorney General William Barr said that the United States is "a generous country but is being completely overwhelmed" by the burdens associated with apprehending and processing hundreds of thousands of migrants at the southern border.

"This rule will decrease forum shopping by economic migrants and those who seek to exploit our asylum system to obtain entry to the United States," Barr said in a statement.

The policy is almost certain to face a legal challenge; the American Civil Liberties Union already signaled it would sue. ACLU attorney Lee Gelernt, who has litigated some of the major challenges to the Trump administration's immigration policies, said the rule was unlawful.

"The rule, if upheld, would effectively eliminate asylum for those at the southern border," he said. "But it is patently unlawful."

U.S. law allows refugees to request asylum when they arrive at the U.S. regardless of how they did so, but there is an exception for those who have come through a country considered to be "safe." But the Immigration and Nationality Act, which governs asylum law, is vague on how a country is determined "safe"; it says "pursuant to a bilateral or multilateral agreement."

Right now, the U.S. has such an agreement, known as a "safe third country," only with Canada. Mexico and Central American countries were considering a regional compact on the issue, but nothing has been decided. Guatemalan officials were expected in Washington on Monday, but apparently a meeting between Trump and Guatemalan President Jimmy Morales was canceled amid a court challenge in Guatemala over whether the country could agree to a safe third with the U.S.

The new rule also will apply to the initial asylum screening, known as a "credible fear" interview, at which migrants must prove they have credible fears of returning to their home country. It applies to migrants who are arriving to the U.S., not those who are already in the country.

"Until Congress can act, this interim rule will help reduce a major 'pull' factor driving irregular migration to the United States."

Trump administration officials say the changes are meant to close the gap between the initial asylum screening that most people pass and the final decision on asylum that most people do not win. But immigrant rights groups, religious leaders and humanitarian groups have said the Republican administration's policies amount to a cruel effort to keep immigrants out of the country. Guatemala, Honduras and El Salvador are poor countries suffering from violence .

"This is yet another move to turn refugees with well-founded fears of persecution back to places where their lives are in danger_in fact the rule would deny asylum to refugees who do not apply for asylum in countries where they are in peril," said Eleanor Acer of Human Rights First. "The president can't stand the fact that seeking protection in the United States is legal, so he's doing everything he can to make the asylum process as difficult as possible."

The treaties countries must have signed according to the new rule are the 1951 Convention relating to the Status of Refugees, the 1967 Protocol or the Convention against Torture and Other Cruel, Inhuman or Degrading Treatment or Punishment. But, for example, while Australia, France and Brazil have signed those treaties, so have Afghanistan and Libya, places the U.S. does not consider safe.

Along with the administration's recent effort to send asylum seekers back over the border , Trump has tried to deny asylum to anyone crossing the border illegally and restrict who can claim asylum, and the attorney general recently tried to keep thousands of asylum seekers detained while their cases play out.

Nearly all of those efforts have been blocked by courts.

Meanwhile, conditions have worsened for migrants who make it over the border seeking better lives. Tens of thousands of Central American migrant families cross the border each month, many claiming asylum. The numbers have increased despite Trump's derisive rhetoric and hard-line immigration policies. Border facilities have been dangerously cramped and crowded well beyond capacity.  The Department of Homeland Security's watchdog found fetid, filthy conditions for many children. And lawmakers who traveled there recently decried conditions .

Immigration courts are backlogged by more than 800,000 cases, meaning many people won't have their asylum claims heard for years despite more judges being hired.

People are generally eligible for asylum in the U.S. if they feared return to their home country because they would be persecuted based on race, religion, nationality or membership in a particular social group.