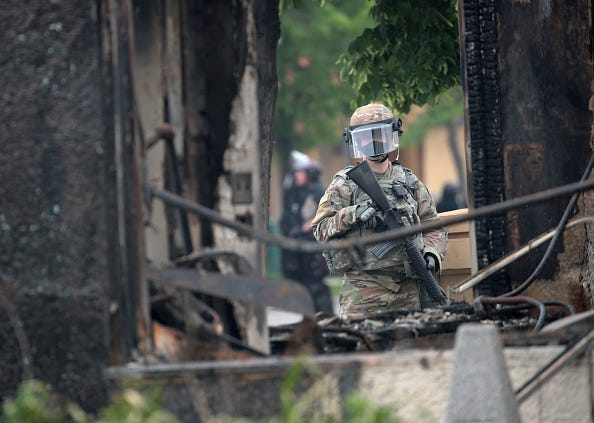 (WCCO) Under fire for decisions to abandon a police precinct under attack by angry protests and basically let it burn, attacked by President Donald Trump, and besieged all around, Gov. Tim Walz spoke to the public about pain. Walz seemed to nearly break down at times Friday when he talked about the scene of devastation surrounding him in Minneapolis and what led to it.

"Generations of pain is manifesting in front of the world," Walz said of the violent protests that damaged businesses, homes and besieged Minneapolis for the last three nights, following the death of George Floyd who begged for his life while a cop knelt for seven minutes on the back of his neck.

"Our libraries, our businesses, our nonprofits and government entities are all shut down from this," Walz said, adding that order has to be restored before anyone can get back to the conversation of serving justice.

"I understand there is no trust in our communities," Walz added, "I understand that and I don't want to patronize you as a white man ... but I'm asking you to help us."

He said the looting and recklessness has to stop, though he acknowledged there is institutional racism that allows a cop to hold down a man in broad daylight. But no problems can be addressed while chaos lights up the streets, he added.

"Thank God a man had a camera to record it," he added of the video that went viral of Floyd gasping that he couldn't breathe. That footage left no room for doubt about what happened.

The governor addressed the same day he had to apologize to CNN, when live on television, a black and Hispanic CNN reporter was arrested by police in Minneapolis while covering the scene of violent, fiery riots that supporters say is meant to show authorities that black lives matter.

Reporter Omar Jimenez was live on camera during his arrest and stayed quiet, calm and polite while they hauled him away.

"A few minutes after hearing that I was a call with CNN President Jeff Zucker," Walz said, adding that he apologized to CNN privately and echoed it publicly.

When they spoke, Zucker was incredibly angry, Walz said, and the governor agreed the arrest was unacceptable. "I failed you last night in that and it doesn't not escape me that we are here on the catalyst that lit that spark... and the idea that a reporter would have been taken while another police action was in play in inexcusable."

Police were out in force early Friday after they evacuated the 3rd Precinct station, the focus of many of the protests, late Thursday to protect employees. Live stream video showed protesters entering the building, where intentionally set fires activated smoke alarms and sprinklers. At one point, fireworks went off while people danced and celebrated.

Witnessing it unfold on social media, President Donald Trump threatened action, and blamed Minnesota leaders for lack of control over the situation. Trump threatened to bring Minneapolis “under control,” calling the protesters “thugs” and tweeting that "when the looting starts, the shooting starts.” The tweet drew another warning from Twitter, which said the comment violated the platform’s rules, but the company did not remove it.

Protests spread across the U.S., fueled by outrage over Floyd’s death, and years of violence against African Americans at the hands of police, the AP reported. Demonstrators clashed with officers in New York and blocked traffic in Columbus, Ohio, and Denver

Meanwhile Walz, at the request of Minneapolis Mayor Jacob Frey, has activated the National Guard to help keep Minnesotan's safe during the violent protests that have hit the city during the past week.

“It is time to rebuild. Rebuild the city, rebuild our justice system, and rebuild the relationship between law enforcement and those they’re charged to protect. George Floyd’s death should lead to justice and systemic change, not more death and destruction. As George Floyd’s family has said, ‘Floyd would not want people to get hurt. He lived his life protecting people.’ Let’s come together to rebuild, remember, and seek justice for George Floyd,” Walz said Thursday.

The National Guard Adjutant General will work with city leaders in strategy for deployment and what assets will be provided, and leaders added on Friday to consider them "not an occupying force" but an instrument of peace.