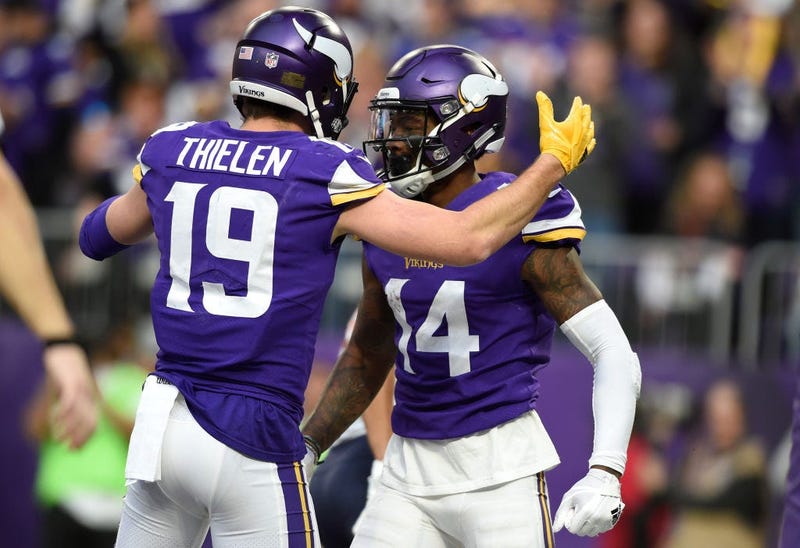 Minnesota Vikings star wide receiver Adam Thielen isn’t sure if running mate Stefon Diggs will be in the huddle this coming Sunday. During an appearance on The Morning News with Dave Lee, Thielen said that was up to Coach Mike Zimmer and Diggs.

However, Thielen made it clear that he is there for his good friend.

“We’ve obviously been together since he came in the league,” he said on News Talk 830 WCCO. “I have a lot of respect for him and how he plays the game.

“I am going to be here if he needs someone to talk to.”

Diggs missed a practice this week for non-football related reasons, sparking further speculation that he wants to be traded.

RELATED: Reading between the lines of Stefon Diggs' press conference

The Vikings passing game has been borderline non-existent this season, relying heavily on running back Dalvin Cook to get the team to a 2-2 record.

Quarterback Kirk Cousins has only completed 65 percent of his passes for 735 yards and just three touchdowns.

Through four games, Diggs has only been targeted 19 times and has 13 catches for 209 yards and a score. Thielen has the same number of receptions on three more targets and just 179 yards.

The players with the biggest negative difference in targets through 4 games the last two years (min. 10 targets both years)?Adam Thielen: -34Stefon Diggs: -24

Diggs did practice on Thursday, and when asked about the trade rumors, he said “I feel like there’s truth to all rumors.”

He confirmed that he has not officially requested a trade and wasn’t sure whether or not his agent has.

“For us as a team we have to make sure we control what we can control,” Thielen added. “We go to work and we do our job. That’s the most important thing.”

After the Vikings loss in Chicago, Thielen was outspoken about the team’s offensive execution.

These comments led to Cousins apologizing to Thielen for not throwing the ball his direction more often.

“Everything’s good,” Thielen commented on the Cousins situation. “The media always tries to twist things and make things into something they’re not.”

He doesn’t expect any carry over into their important game against New York and says the team had a solid week of practice.

“The one thing that this team is, and it’s pretty cool, is guys are accountable,” Thielen said.  “For me, after every game you look yourself in the mirror and ask ‘what can i do better, what can i do to help this team?’ Then you go back to the drawing board and you go back and you work hard.

“I think that’s a cool thing about this team is that everybody kind of has that mindset and everybody is doing that right now.”