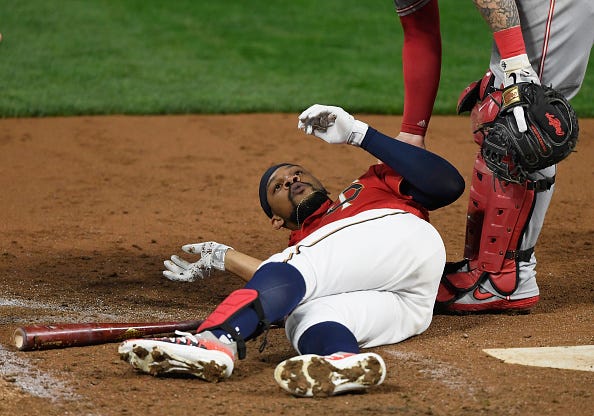 Why should the time leading up to the playoffs be any different for the 2020 Twins?

The injury bug hit the Twins again Friday night in their 7-2 loss to the Reds at Target Field, with Josh Donaldson and Byron Buxton leaving the game early.

Donaldson was taken out after the first inning after experiencing a cramp in right leg.

Buxton's problem was more apparent, the Twins' center fielder went down in a heap at the plate after taking a pitch off his helmet.

Reds pitcher Lucas Sims put his hands to his face and crouched down on the mound after the ball ricocheted down the third-base line.

Buxton wanted to stay in the game but was taken out as a precaution.

"We're still playing and hopful to play to win the division as well," said Twins manager Rocco Baldelli. "The health of our players is going to come first and foremost and then trying to get ready for the playoffs as well. It's a balance amongst all those things."

Both players will be evaluated before Saturday's game against the Reds, who clinched a spot in the National League postseason with Friday's win.

Donaldson's problem cropped up in the same area that he injured earlier in this pandemic-shortened season, forcing him to miss all of August.

Buxton has battled concussion issues in the past while diving for catches, forcing him to scale back his enthusiasm in exchange for remaining in the lineup.

The Twins need to win one of their final two games of the regular season to secure home field for the opening round of the postseason.

The first-round is best-of-three and takes place in the coming week, followed by Division and League playoffs before the World Series.

After the opening round, the AL playoffs take place in San Diego and Los Angeles, with the World Series in Arlington, Texas.