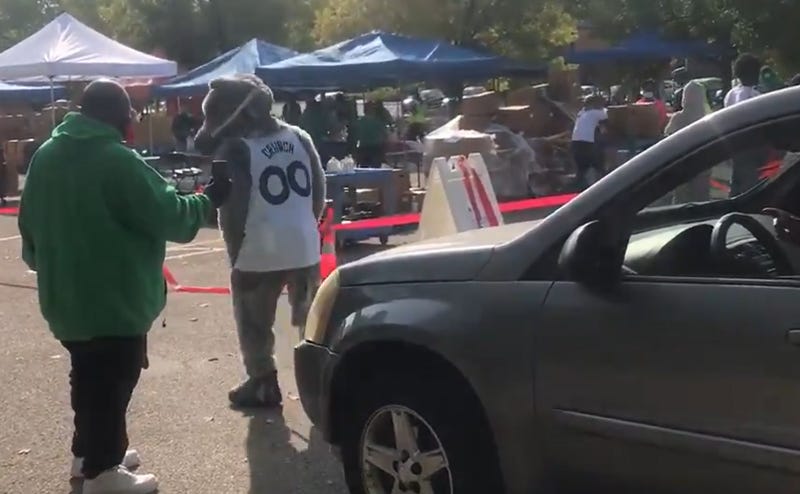 This morning's Fresh Food Friday event at the corner of Plymouth and Oliver in north Minneapolis had more of a block party feel than it has in weeks past as the Minnesota Timberwolves and Lynx held their Pack the Vote event along with NorthPoint's free food distribution program.

Lynx assistant coach Rebekkah Brunson chatted with people waiting to pick up the food in a parade of cars along Oliver Avenue.

“We had an opportunity to kind of sit and chat, and get a better understanding of how they’re feeling at the moment,” Brunson told WCCO’s Mark Freie.

Pack the Vote aims to supply voter registration information to communities where registration has historically been low. Former Timberwolves player Thurl Bailey helped out as well.

“It’s a difficult year for a lot of people,” Bailey said.  “Employment-wise, with COVID, with the racial and social unrest that’s going on.  But there’s some good out there too.”

The event focused on bringing the community together ahead of the November 3rd Presidential Election.

“I grew up in the D.C. area and remember growing up and being a part of that community, Bailey said.  “Just kind of reminds me of that, people coming together.  We need more of that.”

COVID-19 and civil unrest after the killing of George Floyd has taken a toll on Minneapolis communities.

“Some of those things are heavy, but, it’s all positive energy out here,” Brunson told WCCO.  “This is probably a little break from all of that.”

Bailey says while there are things that can't be controlled, but there's a lot that communities can do together.

“We can control who we are, and what we bring to our community and that’s why I’m here,” Bailey says. “I’m here to hopefully be a part of that.  And then go back and teach my kids about the experience, and then maybe they can be agents for change as well.”

The Timberwolves and Lynx will hold their third and final pack the vote event in Saint Paul in October.

Great event held by @Timberwolves and @minnesotalynx this morning in north MPLS as they handed out voter registration info as community members picked up free produce, dairy, and meat items... Crunch clearly had that Friday feeling! pic.twitter.com/Y3p67TfGQ6