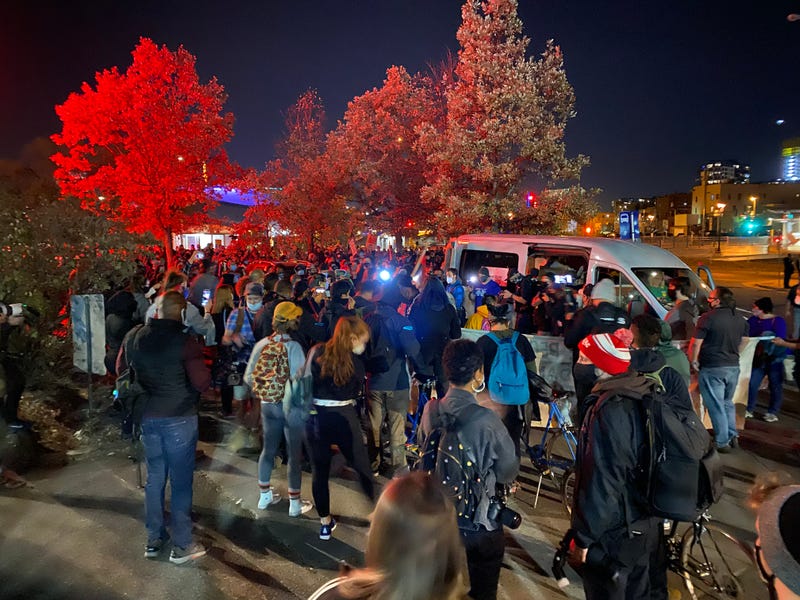 Arrests are underway on I-94 in Minneapolis after hundreds protest.

State patrol told marchers estimated at at least 500 on the interstate that they are being arrested for unlawful assembly. It's been a lengthy process, at least three hours, to arrest a large number of people who remain stuck on the highway. At one point, a dance party broke out because protesters were simply stuck on the highway.

Been out here now for about 3hrs now. Arrests still happening. Gentle applause from protesters each time people are taken away. @WCCO pic.twitter.com/pSEXkrzKSh

While people are getting arrested; some are dancing on the highway. @WCCO pic.twitter.com/xYDyDiNQ5T

Two protests starting in Cedar-Riverside and the Hennepin County Government Center, planned before the election, joined up before marching onto the highway. The exact number of arrests is not known at this time.

Representing multiple groups and interests from Black Lives Matter, socialists, labor, immigrants rights and more, they said they demand every vote be counted.

"What about our constitution? What about the people's vote? It counts," Jessica Standefer said. "If (Trump) wins, what is our democracy coming to?"

Protesters also said a Joe Biden victory is not a panacea for racism, the pandemic or economic struggles and protests like this and across the nation are a pledge that the fight for change is not over.

Current assessment: this overreaction from law enforcement is generating more disturbance and chaos than the protesters who went onto the highway

Letting protesters leave would be the quickest resolution to this incident