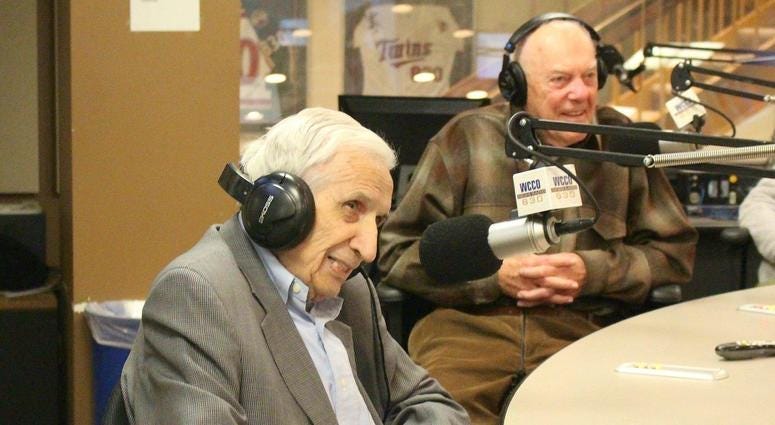 One of the largest figures in Minnesota history has left us. Sid Hartman, the man who for 75 years with the Start Tribune and 65 years with WCCO Radio, has dominated the sports world across the state was 100 years old.

Sid grew up in North Minneapolis. 525 Humboldt Ave. North was his address. That area today, just off Hwy. 55 near an apartment complex, is nothing like it was in 1920, the year Sid was born.

He has described his early life as difficult.  It was a very poor area full of Jewish immigrants.  Sid’s father was an immigrant from Russia.

When Sid was 10-years old, he met a famous newspaper writer and WCCO Radio personality he would one day work with, Halsey Hall who was one of the legendary personalities in Twin Cities’ history.  He wasn’t the only big personality either.
“There was a Kirk’s Pool Hall in the alley.  Halsey Hall would come in there and he’d bet 25 cents, but he’d only put in 12 cents.  And he’d bet and only win back 6 cents.  And we had a guy in there who used to mark the scoreboard.  He’d put the chalk up his nose while he was waiting for the next score.  And old man Kirk must’ve run me out of that place fifty times.  Finally, he gave up, said ‘come on and sit down you punk!’

Sid was a corner newspaper boy.  He would bike to the paper, pick up his stack and sell them in downtown Minneapolis.

Sid shares: “We didn’t have too much in our house.  I was pretty ambitious, and I was about 8-years old when I got my first used bike.  Bought it for about 10 bucks, and started going downtown.  There was a guy at the old Tribune called Joe Katzman who took a real liking to me.  Next thing I know, I had some of the best corners in town.  5th, 6th, 7th and Nicollet at one time.  When I was 13-years old, I was delivering about 700-800 papers a day.”

This was the early 1930’s and Minneapolis at that time was home to bootleggers.  Some would call them gangsters.  Sid called them customers.  They would hang at a place called Jack Doyle’s between 4th and 5th and Hennepin.  Upstairs was a betting parlor.  As Sid describes it, this is “before Hubert Humphrey cleaned the town up, it was wide-open.”

“The papers would come off the press about 4:00.  This was the late edition.  I’d go up there, guys like Chickie Berman, Barney Berman, Isadore Blumenfeld (aka Kid Cann), Tommy Banks, I remember all these names.  I’d sell ten papers, and I’d get 50 cents to a buck from those guys for those papers and they were two cents in those days.”

Sid then began running circulation, or news runs, for the paper while he was in high school.  Then in 1941, Sid was befriended by Louie Mohs who was the circulation manager at the Times.  There was only one news run downtown, and Mohs gave it to Sid.

“Mohs was a very sports-minded guy, and said to me one day that Cullum (Dick Cullum, the Times’ sports director) is looking for some young kid to work in sports.  Why don’t you do them both?  He hired me, $23 every two weeks so I was doing great.  I was there four weeks, and the most important job on the desk is the slot.  All of sudden I was in the slot.  Well, I knew nothing.  But what helped me is the old-time guys on the copy desk who I befriended when I was 8, 9, 10-years old.  They were putting out the paper, I was getting credit for it.”

Hartman was brought in as a “behind the scenes” general manager for the Minneapolis Lakers when the franchise was bought from Detroit, with Sid himself flying the check there personally.  It was Sid that helped craft that franchise including superstar George Mikan that lead to the NBA’s first dynasty.

In 1955, WCCO Radio general manager Larry Haeg hired Sid to bring sports news to the radio.  Sid created “Sports Heroes”, which were a daily interview with the biggest names in sports.  Whether it was a local athlete or stars for the New York Yankees, Sid could track them down.

His “close, personal friends” was later coined by Steve Cannon, but Sid’s network of contacts became the stuff of legend.

Over the course of decades, Sid Hartman was a fixture on the radio and in the newspaper.  Even into his 100th year, Sid was still heard each week on-air and in print.  COVID certainly slowed his travels around town, but Sid was still seen at games, practices, in the offices of head coaches and across the Twin Cities until the end of his life.

Sid Hartman lead a long life, a life filled with amazing people and friends.  He saw things the rest of us will only read in history books.

Sid Hartman died surrounded by his close family including son Chad who confirmed his passing on Sunday afternoon.  Stay with WCCO as we will continue to honor the life and legacy of Sid Hartman all week.