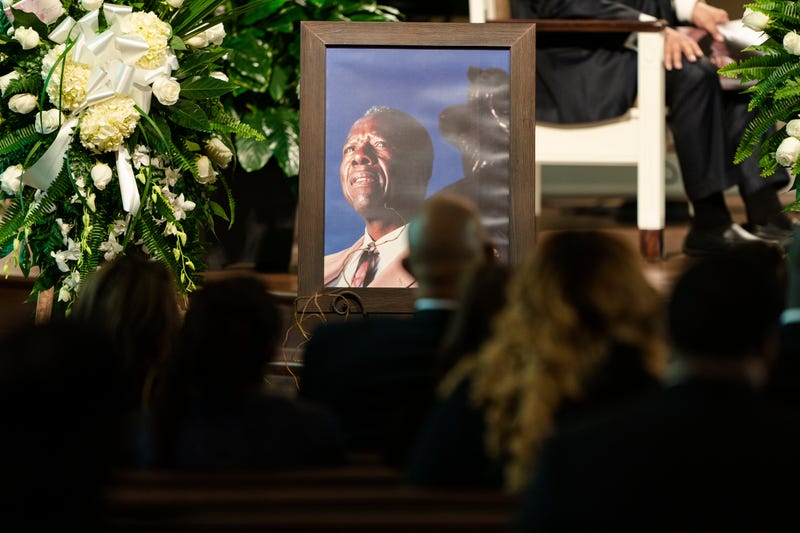 After a nearly three-hour funeral service Wednesday that featured two former presidents, a long-time baseball commissioner and a civil rights icon, the hearse carrying Hank Aaron's body detoured off the road bearing his name to swing through the former site of Atlanta-Fulton County Stadium.

The stadium was imploded in 1997 after the Braves moved across the street to Turner Field, replaced by a parking lot for the new ballpark. But the outer retaining wall of the old stadium remains, along with a modest display in the midst of the nondescript lot that marks the exact location where the record-breaking homer cleared the left-field fence.

A steady stream of baseball fans have been stopping by the site — comprised of a small section of fence, a wall and a baseball-shaped sign that says “Hank Aaron Home Run 715” — since "Hammerin' Hank" died Friday at the age of 86. The fence is now covered with flowers, notes and baseball memorabilia.

Fittingly, Aaron's funeral procession went by the display on the way to his burial at South-View Cemetery, the oldest Black burial ground in Atlanta and resting place for prominent civil rights leaders such as John Lewis and Julian Bond.

The police-escorted line of cars passed near the gold-domed Georgia state capitol, went under the tower that displayed the Olympic torch during the 1996 Atlanta Summer Games, and headed down Hank Aaron Drive.

At the bottom of a hill, the procession took a sharp right turn toward the site of the former stadium. Aaron's flower-covered hearse and all the vehicles that followed did a loop through the circular parking lot, which covers the footprint of the cookie-cutter stadium that became home of the Braves after they moved from Milwaukee in 1966.

It was a touching tribute that capped off several days of remembrances for one of baseball's greatest players. The Braves held a memorial ceremony Tuesday at their current home, suburban Truist Park.

The funeral service touched as much on Aaron's life beyond the field as it did his unparalleled baseball accomplishments, honoring his business acumen, charitable donations, and steadfast determination to provide educational opportunities for the underprivileged.

“His whole life was a home run,'” former President Bill Clinton said. “Now he has rounded the bases.”

Clinton said the two became close friends after Aaron endorsed him during the 1992 presidential campaign, helping him pull out a narrow victory in Georgia. Clinton had been the last Democrat to win the state until Joe Biden edged Donald Trump in November.

"For the rest of his life, he never let me forget who was responsible for winning," Clinton quipped, drawing a few chuckles during the mostly somber ceremony. “Hank Aaron never bragged about anything — except carrying Georgia for me in 1992."

Bud Selig, who was commissioner of Major League Baseball for more than two decades and another close friend of Aaron's, said one of his fondest memories was being at Milwaukee's County Stadium as a fan for the pennant-clinching homer that sent the Braves to the 1957 World Series.

“The only ticket I could get was an obstructed-view seat in the bleachers behind a big, metal post,” the 86-year-old Selig said. “The image of the great Aaron, deliriously happy, being hoisted on the shoulders of his teammates and carried off the field is indelibly imprinted in my memory."

Andrew Young, a top lieutenant of Martin Luther King Jr. during the civil right movement and a former Atlanta mayor, said Aaron helped transform his adopted hometown into one of America's most influential cities.

The Braves moved to the Deep South during an era of intense racial strife, Young pointed out, but having one of the game's greatest Black players helped ease some of the tensions.

“Just his presence, before he hit a hit, changed this city,” the 88-year-old Young said. "We've never been the same.”

Only about 50 people attended the funeral service at Friendship Baptist Church because of COVID-19 restrictions. Others sent videotaped messages, including another former president, Jimmy Carter.

Remembering his tenure as governor of Georgia, the 96-year-old Carter joked that after the Atlanta Chamber of Commerce gave Aaron a new Cadillac, he followed up with “a $10 tag” to go on the vehicle. It said “HLA 715,” a nod to the initials for Henry Louis Aaron.

The two became close friends and even took vacation trips to Colorado with their wives. In one pursuit, at least, Carter was the better athlete.

“Hank and I both learned how to ski together," Carter said. "He skied fairly well. I was a little bit better than that on skis."

A longtime Braves fan, Carter noted he was at Atlanta-Fulton County Stadium the night Aaron hit his iconic home run.

On Wednesday, the Hammer went there for the final time.