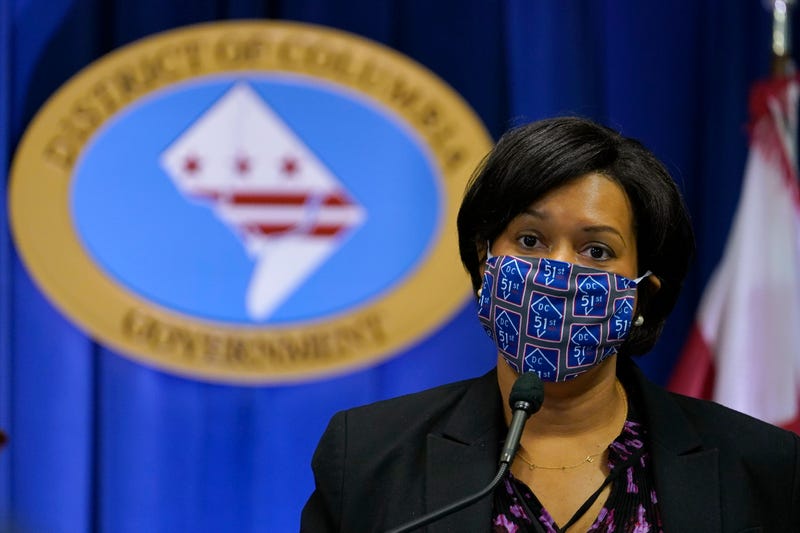 WASHINGTON (AP) — The nation's capital is tightening its public COVID-19 restrictions in the face of spiraling virus numbers locally and around the country.

Mayor Muriel Bowser said Monday that the District of Columbia will remain in Phase 2 of its reopening plan, but she announced a number of adjustments, “so that we can get the virus under control in our city until we get to the other side where a vaccine will be widely available.”

Starting Wednesday, Nov. 25, the maximum limit for outdoor gatherings will be reduced from 50 to 25 people and indoor gatherings will be limited to 10 people. Restaurants can continue to stay open until midnight but must suspend alcohol sales at 10 p.m. Houses of worship can continue at 50% capacity, although the maximum limit on the number of people will drop from 100 to 50.

A fledgling program that was exploring bringing back indoor live music performances will be suspended and all nonessential, nonretail businesses are encouraged to have their employees telework. Starting Monday, Dec. 14, the indoor capacity limit for restaurants will be reduced from 50% capacity to 25%, with the delay intended to give restaurants time to adjust their operations.

The new restrictions are the first major adjustments to the D.C's reopening blueprint since the city entered Phase 2 in June. After largely limiting infection numbers through the summer, local virus metrics climbed steadily throughout November. The seven-day average of daily cases per 100,000 residents — the District's preferred metric — now stands at 23.86, the city's highest point since early May.

The move had been widely expected. Bowser had repeatedly said the city didn't need to rollback as much as other jurisdictions because it had maintained a more conservative stance from the start. But she also acknowledged last week that changes were imminent. On Thursday, the Smithsonian unilaterally announced that it would close down all its facilities, including the National Zoo, starting Monday.

Bowser also continued to implore D.C. residents to skip the traditional mass family gathering for the upcoming Thanksgiving holiday. She encouraged families to limit their gatherings to the people who live in their home.

“We know that we’re making a lot of sacrifices for this holiday season,” Bowser said. “It is necessary.”

The city also intends to begin charging insurance companies for the tests, asking recipients to bring their insurance cards—although Bowser said those without insurance will still receive testing free of charge.