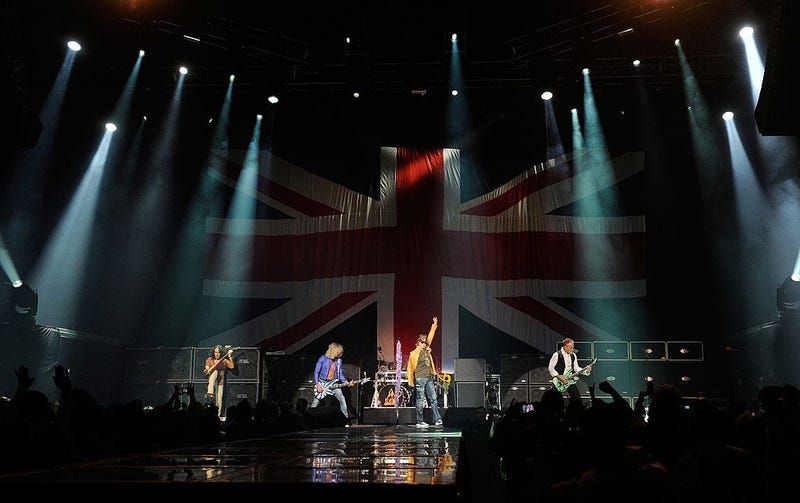 February 28, 2020 02/28/2020 4:07 pm
The non-stop Rock & Roll machine that is DEF LEPPARD just keeps on keepin' on! The heritage hard rockers have just announced the upcoming release (April 24th) of yet another collection of live performances, this time spotlighting a pair of more recent concerts recorded in both London and Las Vegas. The appropriately titled 'London to Vegas' set will include the 'Hysteria at The O2' show, recorded in December 2018 at London's O2 arena that features the entire performance of the band's 'Hysteria' album. A short documentary film, 'Hysteria: Then & Now' accompanies the London show. The 2nd show in the new set is from Def Lep's recent residency at the Zappos Theater at Planet Hollywood in Las Vegas. The Vegas video offers a 28-song set (!) presenting pretty much a 'career retrospective' of the band's most well known and popular songs. The Vegas set also features a behind-the-scenes bonus feature. (see the set lists for both shows below) 'London to Vegas' comes on four CDs and two Blu-rays or DVDs, and buyers of the box will also get a 40-page hardcover book, all housed in a 10-inch box. Pre-orders for 'London to Vegas' as well as a number of related merchandise packages can be made here. Some of the goodies in these bundles include a T-shirt, set lists hand-written by Joe Elliott, replica backstage laminates and screen prints. The release of 'London to Vegas' will be preceded by the already expected arrival of Def Leppard's 'The Early Years' 1979-1981,' a 5-disc collection that contains their first 2 albums, B-sides, rarities, and a full-length recording of one of of the band's earliest live performances in London. Rock ON, Def Leppard!

news
Biden to sign virus measures, requires mask use to travel
news
VIDEO: Inaugural poet Amanda Gorman reveals what she told herself before reciting poem
music
‘This Is Us’ delays new episodes after COVID surge causes production setbacks
news
10 podcasts to keep you up-to-date on US politics
news
For school students, watching the inauguration was a history class in real time
news
Biden targets Trump policies on climate, virus with executive orders