This year, you can do more than just rewatch the film because the Sanderson sisters are reuniting for a special virtual reunion.

What can fans of the 1993 classic expect?

"I'm not gonna give anything away, but there will definitely be music in it. Definitely," Bette Midler, who played Winifred “Winnie” Sanderson, told Jenna Bush Hager on TODAY.

"And they'll be dancing, too,” she added.

Music played an integral role in the film, particularly Midler’s rendition of “I Put a Spell on You.”

She also told Seth Meyers that her famous fake teeth will "definitely" be making an appearance, but they won't be the original set.

"My original teeth did break because I have worn them on special occasions," she shared. "But I did get the original tooth man... to make me another pair,” she explained.

In the virtual reunion the ladies will reprise their iconic roles, which wasn’t difficult once they were all back in the room.

"We're thrilled to death," Midler said. "It was a lot of fun making it. And when it first came out it wasn't as big of a hit as we were hoping for, but as the years have gone by, it's gotten more and more embedded in the culture, and people love it, and they say, 'Oh, I brought my kids up on that, and I saw it when I was a kid and it's great.'"

The actresses have been teasing the highly-anticipated reunion on social media as they step back into their witchy costumes.

"We saw each other for the first time as those characters in 27 years and it was like it was yesterday," Midler said. "Right back to our same relationships, our same way of improvising, our same way of mugging (for the camera)."

And for fans of “Full House,” Midler revealed John Stamos (Uncle Jesse) will make a cameo as “the Handsome Devil.”

The “In Search of the Sanderson Sisters: A Hocus Pocus Hulaween Takeover" event costs $10 and proceeds benefit the New York Restoration Project. 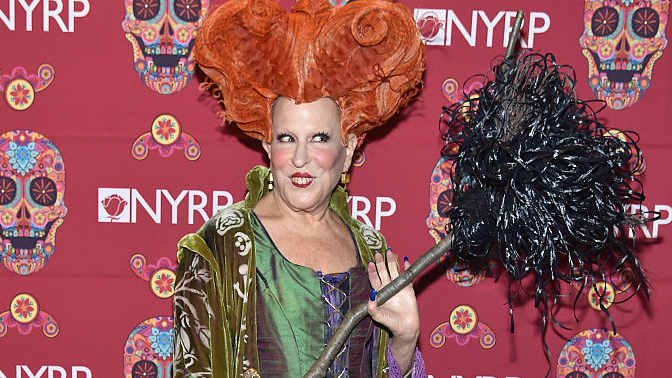 Midler also opened up to PEOPLE about a sequel, "Hocus Pocus 2," which was announced last year.

"They presented us with an outline, and after we picked ourselves up off the floor, because it's been 27 years, we looked at it and I think all of us agreed that it was pretty great," she explained.