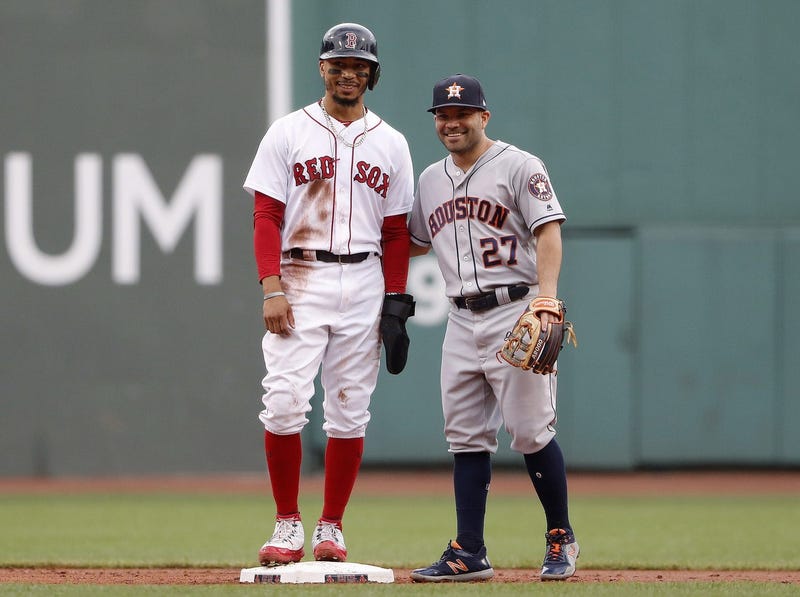 They aren't really obnoxious. We kind of want them to be, but they are not. They are just basking in the best, and they know it.

For two days fans from the Lone Star State have claimed ownership of the absolute team to beat in the upcoming postseason (sorry Red Sox). And Sunday the folks who have been draping themselves in orange baseball jerseys break out the blue and white football garb. It's Houston, the current bane of Boston's existence.

By the time kickoff in Foxboro takes place at 1 p.m. Sunday those who made the trip from Texas will already have two wins under their belt. Let's face it, the idea of Deshaun Watson beating Tom Brady is gravy. Just the mere prospect of it being a possibility is already gratification enough for Houston sports fans.

As the last two games at Fenway Park have reinforced, these foreign followers already stake claim to the Patriots of Major League Baseball. (For a complete recap of the Red Sox' loss, click here.)

The Red Sox may have eight more wins than the Astros, but the Astros are true No. 1 seed.

Watching Houston and you are struck with the confidence with which they play. No panic. Just an assurance that its talent and experience will ultimately win out. It's a vibe the Red Sox have been nurturing for much of the year, that still needs to prove exists against the Astros. Simply put, Friday and Saturday felt a little too much like Game 1 and 2 of the American League Division Series a season ago.

"I know who they are and they’re playing good baseball," said Red Sox manager Alex Cora. "Obviously the bullpen, that kid (Roberto Osuna) reminded me of Roberto Hernandez actually throwing 99, 100 (mph). They have good arms but we feel we’ve been good at-bats against them. We haven’t finished them. Offensively, they did a good job today hunting pitches in the zone early in the count. It really didn’t matter. We didn’t have a good pitch mix today. It seems like we rely a lot on the fastball. At the same time, sometimes it’s about them and their approach. They’re a team, they really don’t care. They stay off the edges of the strike zone and they attack pitches in the middle of the zone."

Going forward, what the Red Sox have going for them is Cora.

The manager is the one person in that room that still oozes the confidence siphoned from winning last season's championship and is still draped over these Astros. Listening to Cora, you can sense he knows how Houston is doing this, and how his guys need to duplicate the persona. Record aside, the Red Sox don't seem to be quite there yet.

They will disagree, and things can change in a hurry over the next three weeks, but that's just the current reality. Starting rotation. Bullpen. Key pieces of the lineup. The Red Sox at least have the potential to match what each element of the Astros is bringing to the table. They simply haven't reached that potential, as we've found out the last couple of days.

"Hopefully we can face them later on in the year, and that’s when it’s either very gratifying or it will be tough," Cora said. "We know where we are. We know what we have to do. Obviously, they’re battling in that division, and they’re getting healthy. That’s a good team. It’s a complete team. Today, like I said, I felt we had chances with everybody out there. Just didn’t cash in. But, it’s OK."