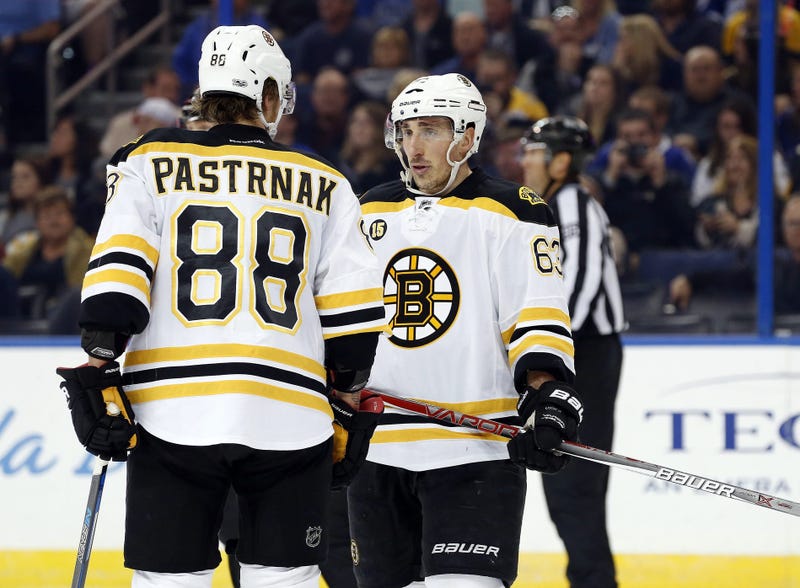 For all of the Bruins' postseason struggles -- the neutral zone, lack of even strength production, top-heavy offense -- want to know what I thought of when the season-ending puck hit the back of that empty net?

I thought about his Game 7 heroics, and what it meant to an entire city when he grabbed the spoked B on his chest in response. But mostly, I thought about what he said after that game:

“I will never forget the noise the crowd made...I just wanted to get out on the ice again. I’d stay there forever if I could.”

It was the loudest TD Garden got all season, but DeBrusk is going to hear that place get even louder sometime in the not-so-distant future.

Then I thought about Charlie McAvoy standing there smiling through a press conference days after he had heart surgery. He returned to the ice a week after the surgery; If he had it his way it would’ve been sooner. McAvoy’s going to hear TD Garden louder than he ever has, too.

I thought of head coach Bruce Cassidy demoting David Pastrnak to the third line for a while so Pastrnak could sharpen up his defense and regain some urgency, then his record-breaking postseason and all his top hats. I also thought about his life -- a kid who grew up poor and still tapes his stick how he did when he couldn’t afford tape, whose first meal after he signed his Big Boy contract didn’t even crack $10 -- and the dynamic of this team.

Next I thought of Danton Heinen sitting in a suit instead of a sweater, watching his team from nine levels above the ice. Pissed off. He's going to think of that feeling every single workout from now until training camp. He won't let it happen again.

There’s something plastered on a wall at TD Garden that the team sees before and after each game. It goes like this: “Surround yourself with people on the same mission as you.”

I thought of Cassidy’s crazy-at-the-time idea to keep Pastrnak, Brad Marchand, and Patrice Bergeron together and how it worked out.

Despite a silent Game 5, Marchand’s on the upswing. He ended the regular season with 85 points -- the same as the previous season, only he played 12 fewer games. It might not seem like it right now, but he improved in the playoffs with 17 points in 12 games. Bergeron improved offensively this season and still copped a Selke nomination in the process. Why should you think either of them are going to slow down in the next two years?

McAvoy and DeBrusk now have at least two rounds of playoff experience, including a Game 7 survived. It also looks like they learned a thing or two about playing hurt. All necessary steps in a process that will eventually end in a TD Garden so loud their eardrums will serve as souvenirs.

Yeah, of course I thought about the blatant disappearance of secondary scoring in this postseason run, certain players approaching free agency, and the question mark on defense surrounding Torey Krug should he leave. The Bruins need to somehow acquire or develop a big name defender, and a few other pieces need to fall into place here. It would also be great if Brandon Carlo could make it to a postseason.

The storyline has been beat into the ground at this point, but really -- who had the Bruins making the second round this season?

With the combination of a promising prospect pool and stars peaking, something like this was on the horizon for sure -- just not for this season. That’s why all this panic that the Bruins lost in the second round to a hungry-as-ever Lightning team actually seems more like a positive.

Make fun of me for the spin zone of the century if you want, but humor me first: Somewhere between the DeBrusk chest grab and Rick Nash actually scoring two goals in one game, you started to get the feeling that this team could maybe win it all, right? At the very least, it wasn’t out of the question.

A few years of apathy were replaced by an expectation. What should that turn into going forward?

Up next are Ryan Donato, Heinen, Noel Acciari, Zdeno Chara, Adam McQuaid, McAvoy, and a few promising prospects. Whew, okay, there are a few tough contract negotiation talks ahead. Likely more than one lose-lose situation is inevitable, as are a few surprises. The way I see it, though, most of this stuff will play out like swapping in whoever-for-whoever worked out this postseason. Focus on the core.

Bergeron’s signed through 2022. Pastrnak, who tore down his ceiling and built a whole new one this season? 2023. Marchand? 2025. It looks like Chara might go year-by-year, which really couldn’t be a better situation for the Bruins. Say what you will about Rask (actually, please don’t), but he’s signed until 2021. If he’s not going to “win you a Cup,” he’s at least not going to get in the way of one like we’ve seen in some goaltenders who didn’t make it past Round 1. There's all that, and now those once-promising rookies know how it feels to lose in the playoffs.

So we’ll have to see what Sweeney can and can’t do this offseason, we’ll all need to remain reasonably calm about Donato and Jakob Forsbacka Karlsson, and the defense has to be more proactive. It would also be great if the Bruins' end-of-season schedule isn't a game every other day.

Just promise me one thing, okay? Don’t forget the anger you felt during these playoffs.

It might’ve been directed at the officials, or Gionta, or (sigh) Rask, but all of it has a common denominator.

You were angry because the Bruins didn’t win the Stanley Cup and it actually felt like they had a chance.

Parts of Round 2 reeked of last season's series with Ottawa, but there's a reason you traded in the apathy you felt then for the anger you feel now.