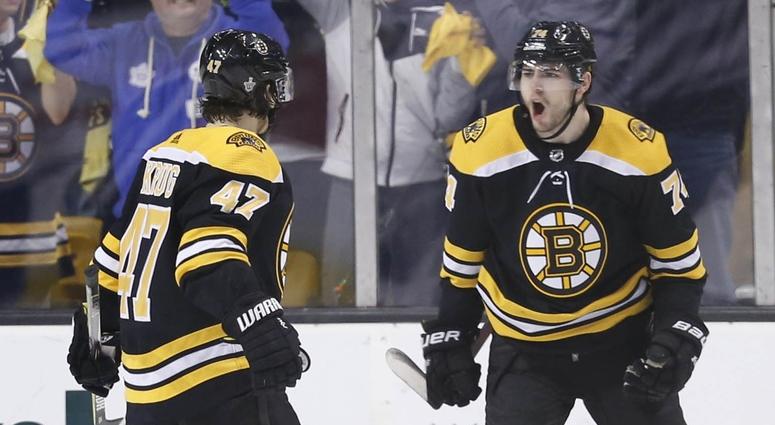 John Tavares didn’t have to make a case for himself.

He’s scored the fifth-most regular season goals in the league since his 2009-10 debut, he’s coming off a top-three career season, and you just know the 27-year-old center has so much more to offer an even somewhat functional team.

No doubt, it was a blow to the Bruins that they lost out on him to a division rival. Zdeno Chara and Charlie McAvoy successfully held Auston Matthews to one goal through seven games in Round 1, so the depth (if we’re calling Tavares “depth”) means even more trouble for the Bruins.

Tavares is a tally in the yes column of the Maple Leafs’ “will they-won’t they” saga, and any team would be lucky to have him. There was just a bit of a hockey-world wide overreaction in the wake of #TavaresWatch -- probably due to him finally getting recognition after...being on the Islanders...for so long.

He’s here, he’s paid, and he’s going to make the Leafs a heck of a lot tougher to play against.

He’s still not Sidney Crosby or Patrice Bergeron. Crosby and Evgeni Malkin are still the best one-two punch at center in the league until proven otherwise.

If this were the only Atlantic Division blockbuster of the offseason, the Leafs won -- but the Bruins would’ve been fine. Nothing to worry about. Maybe it meant general manager Don Sweeney had learned from his past blockbuster deals named David Backes and Matt Beleskey.

Point is: If you’re Sweeney and a division rival happens to snag Tavares, you might swear a little when you find out. You might play some mental matchup Mike Babcock style for a second. Then you stick to your original plan, whatever it was.

Erik Karlsson to the Lightning, though? That’s something to worry about. Lightning general manager Steve Yzerman called rumors that a Karlsson-to-the-Lightning deal was almost done  “very inaccurate” yesterday, adding there's “nothing imminent, nothing at all." So don’t start sweating yet.

If it does end up happening, it’d make the Bruins the clear No. 3 in a top-heavy Atlantic race, assuming they’re done with their free agency moves. But that’s not an assumption I’m willing to make right now.

• The current roster is basically a fraternity of left-shot defensemen. There are eight NHL-ready defensemen ready to take the traditional six spots -- and two of them (Torey Krug, Matt Grzelcyk) are 5-foot-9, left side, left shot defensemen.

It would be surprising if this is Sweeney’s end game.

Krug’s name had been tossed around during the draft. Even if a certain trade fell through then, that means the Bruins at least aren’t opposed to shopping him around for a big return.

• Hold on. What do the Bruins even need?

Their involvement in the Tavares sweepstakes was simply going all in on a star and not necessarily looking to fill a need. Their push for Ilya Kovalchuk was a little of that and a lot of uncertainty on David Krejci’s right side.

It's still unclear if Rick Nash will sign with Boston, Columbus, or even retire.

No matter what Nash decides, the Bruins could really use a scoring threat of a second-line right winger. I’ve been campaigning for Wayne Simmonds, who's the perennial 30-goal scorer with grit the Bruins need. The problem is he’s only...kind of...on the market. It would take a huge return, and I say go for it if it’s almost anyone other than Patrice Bergeron, Brad Marchand, David Pastrnak, Jake DeBrusk, Zdeno Chara, or Charlie McAvoy.

• After losing Riley Nash to free agency, they could also use a reliable third-line center. Maybe that’ll be Kuraly, Jakob Forsbacka Karlsson, or another young gun -- it’s likely a problem they’ll solve internally. That’s a position for the youth movement to prove itself.

• Am I the only one going back-and-forth about whether the Bruins still need to shop around externally for a big left side defenseman?

John Moore will provide left side depth better than Nick Holden could. In terms of points, he’s had a career high past three seasons -- 19, 22, 18--and he’s a 6-foot-2, 210-pound “big” guy. But his five-year deal doesn’t scratch the itch, say, Oskar Klefbom or Artemi Panarin would -- either of those two would be a huge upgrade to the current roster.

With Moore, and Carlo’s return, and the six other NHL-caliber defensemen, there isn’t an absolutely dire need for defense. It’s one of those situations we’ll reflect on at the end of the season and Sweeney will either look like a genius who had always believed in what the Bruins had or someone who should’ve taken a bigger risk.

With Tavares and potentially Karlsson in the Atlantic Division mix, it might be time to stop thinking in bare necessities and go for the luxury. It’s like your next door neighbor got a shiny new Ferrari, then all of the sudden the folks across the street are hopping into a Mercedes Benz.

The rest of the neighborhood is in shambles -- you can still laugh at Ottawa driving a hand-me-down van with the service light on, you jerk. As reliable as your Honda is, though, its probably won’t win the friendly neighborhood drag race.

The Bruins are in an uncomfortable spot because they’re right on the cusp of fully embracing the youth movement and all of its uncertainties. Maybe Xzibit will visit Warrior Ice Arena this offseason and pimp the ride the Bruins already have. Who says DeBrusk, Forsbacka Karlsson, Danton Heinen, Anders Bjork, Ryan Donato and/or a handful of others won’t make Hondas cool again?

There’s just an element of uncertainty the Robinsons don’t have as they’re waving at you from their benz. And God, that's obnoxious.