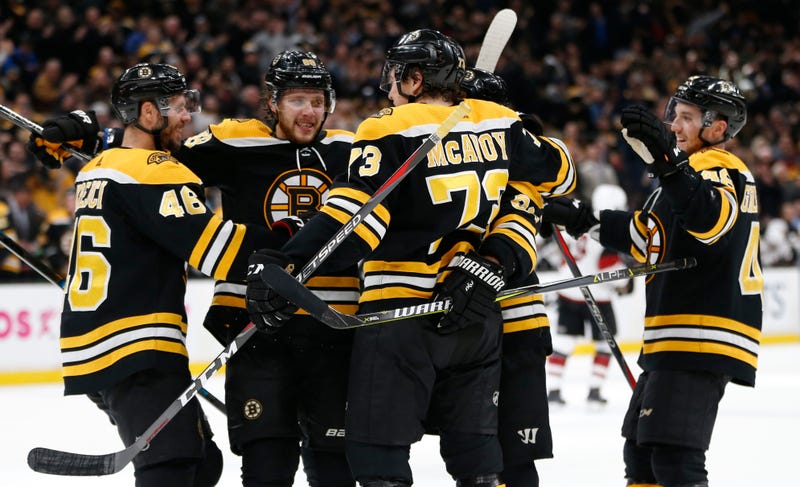 Although they weren’t always on the ice together, the Bruins’ ‘best line in hockey' combined for 20 points over the past three games – all victories in a four-night span that concluded with a 4-3 victory over Arizona on Tuesday at TD Garden.

Brad Marchand, David Pastrnak and David Krejci each had three points against the Coyotes. Wait, who? David Krejci? Yes, coach Bruce Cassidy, partly because his hand was forced by Jake DeBrusk’s injury, finally decided to have Krejci center Marchand and Pastrnak in Patrice Bergeron’s absence. The result: the same as when Bergeron, who’s out with a rib and collarbone injury, was between those two all-world wings. The Bruins again have the best line in hockey.

And now that Krejci has finally found NHL chemistry with his Czech countryman Pastrnak, and forged a better on-ice relationship with Bergeron’s longtime partner in crime Marchand, there’s only one thing left for Cassidy to do. The coach has to keep this line together even when Bergeron returns from injury.

Now there’s no telling how long the Bruins will have to wait for Cassidy to face this dilemma. Bergeron has been out almost four weeks since he was driven into the boards by Dallas’ Radek Faksa. Bergeron recently started skating again but so far isn’t close to practicing with his teammates let alone playing in a game. Obviously, Cassidy won’t be breaking up his super line while Bergeron remains sidelined.

But even after Bergeron’s back, there should be no rush just to insert Bergeron on the top line and force Krejci to again play with a revolving door of wings on the second line. Krejci and DeBrusk have fine chemistry but nothing like what Krejci’s shown with Pastrnak and Marchand since being given the full-time keys to the first line.

There’s no better way to get Krejci, at 32, back to being a near point-per-game player than playing him with the Bruins’ best two wings. His methodical, magical approach to the game suits Marchand and Pastrnak, even though they like to play with speed. Krejci can motor up and down the ice when he has to, and his vision allows him to hit them with passes even when he can’t keep up. Maybe finding himself open more with defenses focusing on Marchand and Pastrnak will encourage Krejci to shoot more and help him add to his goal total as much as his assist collection.

It was once thought that anyone could skate between Marchand and Pastrnak and the line wouldn’t miss a beat. Colby Cave and Jakob Forsbacka Karlsson disproved that theory. Krejci’s showing now that he still has the skills to drive that line without it dropping off from the level it plays at with Bergeron. And that should now allow Bergeron to take his talents elsewhere.

No one could’ve predicted the offensive beast Bergeron was going to become starting with his age-28 season. He hasn’t slowed down since, even picking up 26 points in 19 games this season at 33 years old. He’s one of the premier two-way players in the league and the one that made the Bruins’ former No. 1 line go since the day it was united. Now it’s his turn to drive a second line and maybe make it match the first line's production. Imagine the influence Bergeron could have on the likes of DeBrusk, Danton Heinen and Ryan Donato if he centered two of them and played the type of defense that would free them up to maximize their skills. It’s not that Krejci centering those younger players doesn’t serve as a fine defensive conscience; it’s just that Bergeron’s abilities at the defensive end are a level or two above Krejci’s.

For argument’s sake, let’s say you put Heinen and DeBrusk with Bergeron. You know that line’s going to fly. And now we know Krejci with Pastrnak and Marchand is unstoppable. Voila, the Bruins have a top six that can compete for a title without general manager Don Sweeney swinging a trade for a top-six forward, and he can concentrate his focus on acquiring a veteran third-line center.

“I’m just filling in for Bergy,” Krejci said after the win Tuesday.

If the Bruins are wise, they’ll prove Krejci wrong and ensconce him as their No. 1 center.