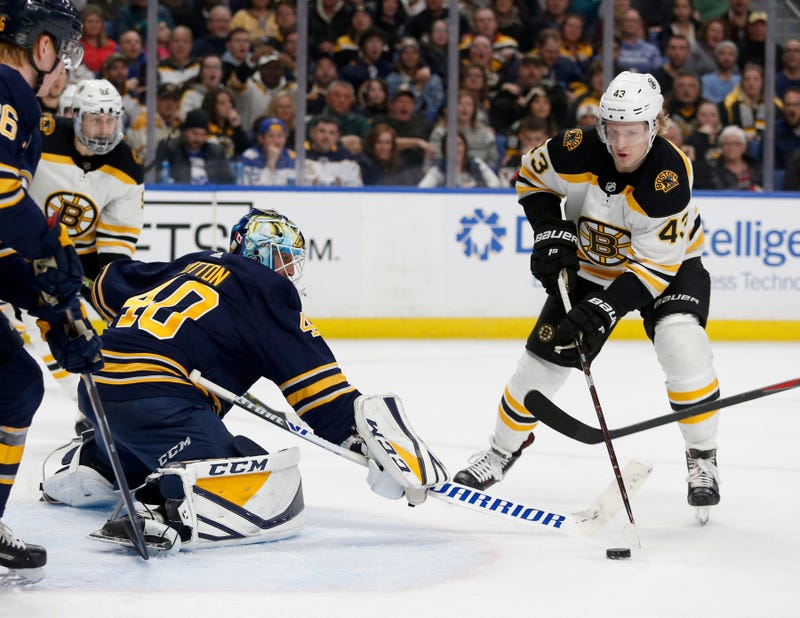 Sean Kuraly scored the game-winning-goal 3:44 into overtime of the Bruins’ 3-2 win at Buffalo on Saturday.

The 25-year-old, who has always been known more for his body bashing that his offense, might as well have been the hero considering he’s now a top-line forward, a fact that Bruins shouldn’t be bragging about.

With Brad Marchand out of the lineup because of an upper-body injury, coach Bruce Cassidy kept his lines in the blender all night long (perhaps explaining why their attack was as strong as pureed strawberries most of the game), and that meant Kuraly actually took several shifts on the first line with Patrice Bergeron and David Pastrnak, and started overtime in a forward pair with Bergeron.

The changed role didn’t change Kuraly’s style, who scored the game-winning goal by following his shot and poking the rebound past Sabres goaltender Carter Hutton.

Kuraly started the game split from his usual linemates, Noel Acciari and Chris Wagner. Cassidy reunited them several times during the game, and Acciari scored while on the ice with Wagner and Colby Cave to tie the score at 9:30. That’s right, 2/3 of the Bruins’ offense came from Kuraly (third goal of the year) and Acciari (first of the year, first since last April).

Jake DeBrusk’s power-play goal with 2:29 left in regulation set the stage for Kuraly to get the Bruins the second standings point, and Tuukka Rask pretty much earned the Winter Classic starting nod by making 26 saves on 28 shots. The Bruins’ team defense, torched for nine points two weeks ago by the line of Sam Reinhart, Jack Eichel and Jeff Skinner in a 4-2 Sabres win, kept Eichel to one shot on net, Reinhart to no shots and Skinner to four shots. Reinhart and Skinner had one assist each when Marco Scandella scored the first goal of the game.

But for all the positive vibes the Bruins must have been feeling after grinding out an Atlantic Division win on the road without Marchand and Charlie McAvoy, they had to be concerned that taking one forward out of their lineup made such a mess of their already ice-cold offense. In addition to Kuraly getting cast in a more prominent role, we saw Jakob Forsbacka Karlsson play right wing and Joakim Nordstrom play some first-line minutes. Ryan Donato played on every line and Danton Heinen skated for just 8:05. Heinen epitomized the Bruins' offensive struggles when he was given the puck by Buffalo forward Casy Mittelstadt 4 feet from the Sabres net midway through the third period and decided to dangle across the slot rather than shoot (he didn't get the shot off).

The Bruins knew there was a strong chance Marchand wasn’t going to play, yet they flew out of Boston with the roster they put on the ice Saturday. By the first television timeout of the first period Cassidy was already juggling his lines, benching Heinen and moving Forsbacka Karlsson to wing. These guys have been ineffective for weeks now but the Bruins expected them to step up in Buffalo. Donato took a couple shifts with Bergeron and Pastrnak late in the game when the Bruins were trailing, but Cassidy can’t trust him against difficult matchups on the road. That was the case last week as much it was the case Saturday. Yet the Bruins didn’t make a roster move to shore up their corps of wings.

Regardless of how the likes of Anders Bjork, Ryan Fitzgerald or Peter Cehlarik have been playing in Providence – and it sounds like they’ve all had their ups and downs – it really would’ve made more sense to have one of them on this road trip instead of the overwhelmed Forsbacka Karlsson. Not every promotion from the AHL has to be a reward; sometimes just needs a player to fill a need.

The Bruins survived their roster gaffe with strong defense and some offense from unexpected sources. If they don’t get healthier by Tuesday they could probably grind out another one against the lowly Chicago Blackhawks at Notre Dame. But if Marchand’s injury turns out to be more serious than what the Bruins expect right now, and general manager Don Sweeney doesn’t believe there’s help on the Providence roster, it’ll be time for the GM to swing some sort of trade for a top-nine wing to stem the tide. With goals so hard to come by and this divisional race tighter than anyone could’ve imagined, waiting until the February 25 trade deadline can’t be an option if the internal choices aren't better than Kuraly on the top line or Forsbacka Karlsson on the wing of the second line.