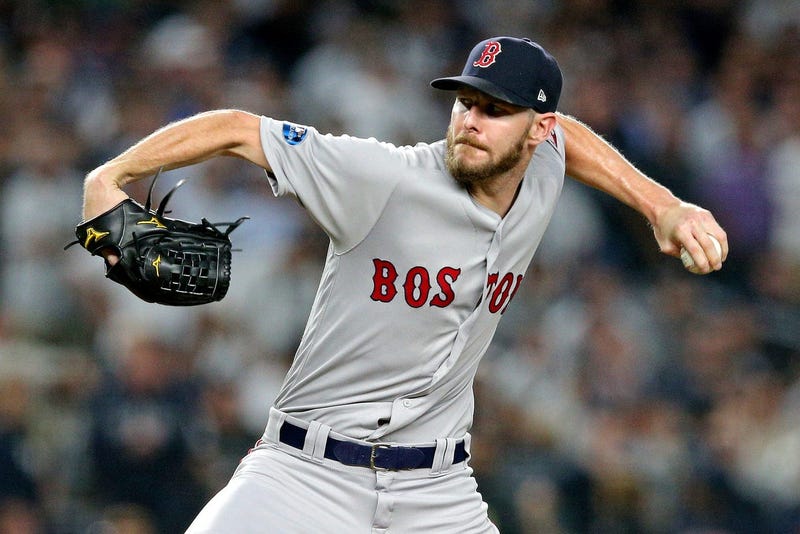 Tonight is Game 5 of the ALCS and Red Sox ace Chris Sale will not be starting as originally planned. Sale is the best pitcher on the Red Sox and it’s not close. He has elite ace stuff that we haven’t seen in these parts since Pedro Martinez and when he’s healthy, he’s that good, absolutely dominant. We’ve had some true top of the league starters in this town since then too,, including Curt Schilling, Josh Beckett and John Lester. But this guy defines the word "ace." He’s got the attitude, grit and the stuff to lead this staff when he’s healthy. But the fact is, he’s not fully healthy.

The Red Sox have a great chance to make and win the World Series in 2018 and that’s where most of the attention should be. It’s where most of my focus is too, however, both the short-term and long-term future of one of the team’s most precious assets, Chris Sale, is paramount on my mind right now. I’ve got questions that impact this series, the World Series, the off-season, next season and next off-season. I have ideas and hopeful solutions to what is most certainly the question beginning to loom largest about the great Chris Sale, which simply is: what to do about him? That question is relevant right now, next week, next year and beyond.

I have a theory about Sale’s recent stay at Mass General Hospital for the stomach issues that were reported Sunday night. This is merely an opinion, a proposed hypothesis I came to on my own that is based on my own recent experience. Last month I went on a 10-day course of a very strong, prescribed anti-inflammatory to reduce swelling for my own ailing left shoulder before an upcoming surgery. The result? Let’s just say I was ‘indisposed’ for roughly two weeks. Two long weeks and my stomach and entire digestive system was very unhappy to say the least. Get my drift? I bring this up only because I find it coincidental that Sale has been battling shoulder inflammation for over two months and suddenly finds himself hospitalized with stomach issues. I’m not fat, but I’m Jaba the Hutt compared to the wiry and downright skinny Sale, so it wouldn’t surprise me at all if a steady course of a strong ant-inflammatory turned his stomach inside out. Just saying. Regardless if that is the case or not, his shoulder is most certainly not right and that fact has become a daunting trend in the back half of each of Sale’s first two seasons in Boston.

I want Chris Sale in Boston, I really do. He has the perfect attitude that sports fans love in their favorite players. He’s got grit and can absolutely handle the pressure of this market. He pitched very well against the Yankees in multiple roles and did so in the tense pressure cooker of October; answering some proposed and frankly absurd questions about his postseason mettle. The guy has it and he’s a joy to watch and root for. However, to question his durability as a full time, full year starter that can go the distance from spring training through October has proven to be nothing but fair.  This question is absolutely in play right now, next week, next year and when his contract expires at the end of next season. So what now? What to do with Chris Sale? I have an idea.

If Chris Sale cannot physically sustain his ace level pitching as a starter for a full season then maybe his future is as a late-inning reliever. When the Oakland A’s acquired Dennis Eckersley in 1987, manager Tony La Russa had a vision for Eck that forever changed his future and fortunes in Major League Baseball. A future that led him to the Hall of Fame and deservedly so. Eckersley had an erratic existence as a starting pitcher, first in Cleveland, then here in Boston and in his final stop as a starter in Chicago with the Cubs. He had thrown a no-hitter in 1977 with the Tribe, won 20 games with the Red Sox in 1978 and took the hill as the starter in the 1982 All-Star game as a Red Sox for the American League. Not bad, but the lows were low for Eck and in 1986, the former 20 game winner in Boston found himself sporting a 6-11 record and 4.57 ERA (high in those days)... Then three games into his Oakland A’s career in 1987 Eckersley began to cement what turned into a Hall of Fame career as the games dominant reliever of his day.

Unlike Eckersley, Sale is still on the top of his game when he’s healthy as a starter. When he’s not, he’s still got the stuff and the mindset to compete at a winning level, but how long can that last? I feel like there’s an 800-lb gorilla in the room regarding Sale that nobody really wants to address. The trend with his lack of sustainability seems real. More concerning is that during this season from day one, Cora and the Red Sox took a strategic course with Sale, specifically to keep his blazing but vulnerable left arm and shoulder fresh for the full season and specifically for October, but look where we are. It’s Game 5 tonight, Sale was rested for nearly two months and he won’t be on the mound. You know it’s killing him. A guy like that with that competitive fire wants to be out there. He needs to be out there, but that shoulder, stomach or both just won’t allow it.

Perhaps Sale’s shoulder could better sustain its strength as a closer. Imagine getting the best of Chris Sale from anywhere between two to four times per week to close out games. If this season has taught us anything, it’s the need for and value of a reliable bullpen and the fear of not having one. When Chris Sale came into Game 4 in the Bronx last week during the 8th inning I had no doubt he’d do the job. No doubt. Just like I have no doubt that getting seven months of sustained starts every five days is unrealistic for Sale. If it’s not realistic now, how can it be realistic for the future? If it’s not realistic for the future, then how do you justify resigning him? You make him a closer, that’s how.

Like Bill Belichick does in Foxboro, I think this is a case where acting a year early would be far wiser than being a year late. If his agent doesn’t want to play ball at a closers salary then offer more years. If I could keep a healthier Chris Sale in a Red Sox uniform for another seven years then I’d do it today; provided I had some confidence in the sustainability of that left shoulder of his. Simply said, converting him into the next great closer of his day makes that proposition much more viable and that’s an investment I’d be more than willing to make.