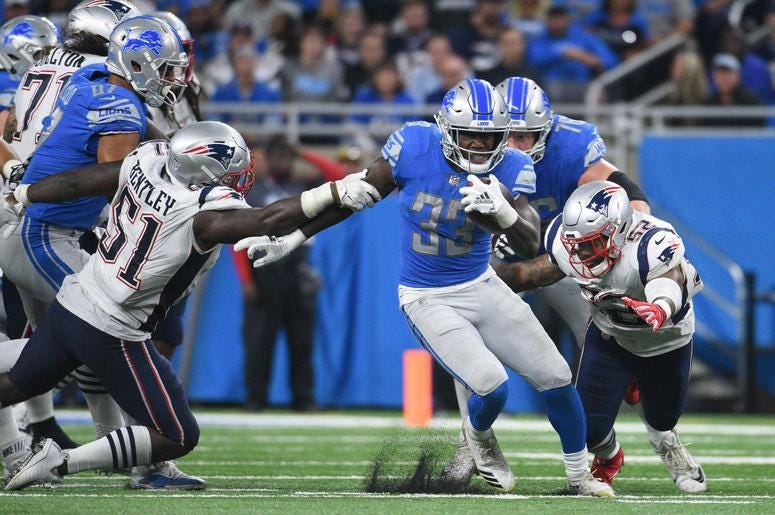 Games are not won in March and April, but the decisions made during that time impact them, and that is what the Patriots are currently dealing with.

It’s tiresome to keep revisiting the offseason, but given the Patriots’ 1-2 start to the year, the exercise is worth doing considering the troublesome areas on the roster.

Through three games, the Patriots offense is ranked 25th in both yards and points. Yes, 25th. Let that sink in, an offense led by Tom Brady and Josh McDaniels is ranked in the bottom third in all of football. Defensively, it’s even worse. It is ranked 20th in points allowed, but 29th in yards allowed.

A lot of these issues trace back to the offseason and the moves that were both made, and not made.

It’s easy to pinpoint what the biggest weakness of the unit was last year. Linebacker, particularly speed and athleticism at the position. So, how was this addressed in the offseason?

Besides drafting two linebackers — Ja’Whaun Bentley and Christian Sam in the fifth and sixth rounds respectively — the organization did nothing at the position. A lot of faith was put into Dont’a Hightower returning to form after missing most of last year with a shoulder injury, but that hasn’t happened yet this year. At times, he and the other linebackers have looked like they are running in quick sand and the opponents are on roller skates.

Kerryon Johnson and the Lions offense was able to use this to their advantage on the way to Johnson picking up over 100 yards on the ground Sunday night, the first time a Lions back has gone over 100 yards since 2013.

New England also lost No. 2 cornerback Malcolm Butler via free agency. Given the contract he received from Tennessee, it’s hard to blame the Patriots for not bringing him back, but it is worth questioning what they did to replace him.

The short answer is Eric Rowe and Jason McCourty.

These two aren’t bad NFL cornerbacks, just inconsistent and not reliable to be a No. 2 cornerback on the Patriots. They are good players to have on a roster, just not at the top of the depth chart. Given the injury to Rowe, the Patriots played rookies J.C. Jackson and Keion Crossen at various points Sunday night in Detroit. While there’s nothing wrong with integrating a rookie into the lineup, there’s almost a dependence on them given Rowe and McCourty don’t appear to be true No. 2 corners.

While the position was deep this summer, it lacked top-end talent and it’s showing up now.

Offensively, it starts at wide receiver.

It’s Week 3 and the Patriots only dressed three true wide receivers — Chris Hogan, Phillip Dorsett and Cordarrelle Patterson. Julian Edelman’s suspension came following minicamp, so the team couldn’t prepare for that, but overall the team didn’t do a good job of replacing players this offseason.

Brandin Cooks was traded to the Rams and Danny Amendola signed with the Dolphins. Did the Patriots do much to replace these players? Not really.

Jordan Matthews and Kenny Britt were veterans who have produced in the league before, but came with health concerns and that showed up over the summer when they suffered injuries and were released. Without Cooks, the Patriots are lacking a deep threat down the field, which factored into taking a shot on Josh Gordon.

No one could ever come in and replace Amendola give his chemistry with Brady, but it’s worth asking why didn’t the team give him $2-3 million more in order to retain him? There’s no question the Patriots weren’t going to pay him what he’s getting from the Dolphins, but anything close would have likely got it done given his relationship with Edelman and Brady.

Without Edelman, it’s been obvious Brady doesn’t have anyone he truly trusts besides Gronkowski, and Amendola could have very easily been that player. Letting Amendola walk was a gamble and it’s not paying off.

Running back can also be viewed as a miscalculation.

Dion Lewis departed via free agency and was essentially replaced by Sony Michel, who hasn’t looked anything like a first-round pick through his first two games. The team re-signed Rex Burkhead, who continues to battle injuries and was forced to leave Sunday’s game with a neck injury. After Jeremy Hill tore his ACL in Week 1, the Patriots didn’t replace him with a big back and now they have paid the price by struggling in short-yardage situations.

The team took a lot of gambles at the running back position: selecting one in the first round, counting on Burkhead and also not adding a big back following Hill’s injury. All three decisions are now hurting them over the first three games.

Based on what we’ve seen, it was not a great offseason for the organization, and just think if it actually did trade Rob Gronkowski. Yeah, we won’t go there.