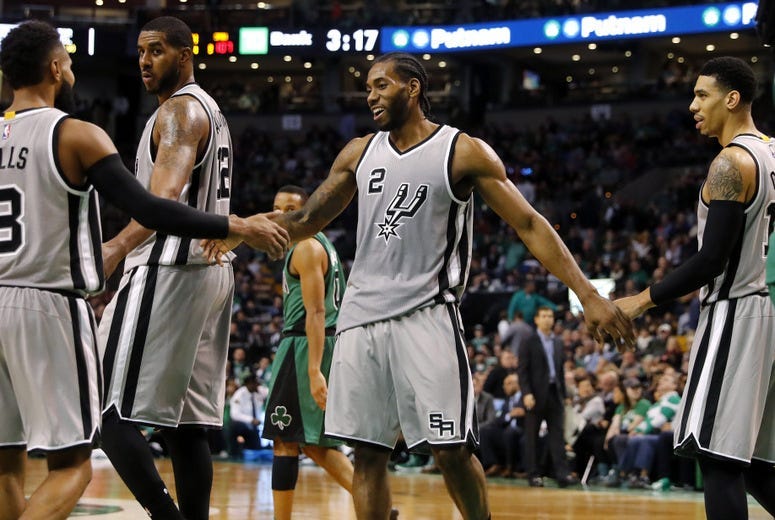 The Toronto Raptors just got a lot better. It doesn't matter. The Celtics remain the best team in the Eastern Conference.

In swapping All-Star DeMar DeRozan and some bit pieces to the Spurs for disgruntled All-Star Kawhi Leonard and three-and-D specialist Danny Green, the Toronto Raptors made a seismic splash.

As previously constructed, Toronto had maxed out: excellent regular-season team, zeroes in the playoffs. The Kyle Lowry-DeRozan pairing reached one conference final, where it bowed meekly to LeBron James and the Cavs. The Raptors got sent home by Cleveland in each of the last three seasons, including an embarrassing second-round sweep this year after leading the Eastern Conference with 59 wins.

This was supposed to be the years that Toronto vanquished its depleted nemeses. Instead, the Raptors missed their final 12 shots in regulation of Game 1, blowing a seven-point lead in the sequence that came to signify their entire run -- pretty good, but never a serious threat. They fired Coach of the Year Dwane Casey a week later.

Leonard changes that narrative, as long as he commits himself, which is by no means a guarantee. He's battle-tested in ways that DeRozan never was and anyone wondering about his impact should just watch the first half of Game 1 of the Western Conference Finals two years ago when the Spurs led the mighty Warriors by 20 points before Zaza Pachulia donned his black hat and undercut Leonard. The ensuing ankle sprain knocked him out for the series and Golden State romped to a sweep.

From a Celtics perspective, the trade makes the Atlantic Division even more competitive. In addition to the Kyrie Irving-Al Horford-Gordon Hayward-Jayson Tatum-Jaylen Brown quintet in Boston, the division also features Ben Simmons and Joel Embiid in Philadelphia, and Leonard and Lowry in Toronto. That's a lot of firepower for the supposedly inferior conference.

What the Celtics have on Toronto, however, is important, and perhaps the key to their success -- stability. Head coach Brad Stevens praises the concept of playing connected, a quality he describes as something you know when you see. It's not just five guys running plays cohesively, but covering for each other when situations break down. You don't become the best defensive team in the league without it.

The Raptors, conversely, must integrate Leonard and Green into a system that's being rebuilt from the ground up under new head coach Nick Nurse, a former Casey assistant who wants to take Toronto in a new direction, especially defensively, where it allowed nearly 112 points a game in the playoffs last year.

Leonard and Green are outstanding building blocks in that regard. Leonard is a two-time Defensive Player of the Year, while Green is one year removed from making an All-Defensive team himself. They'll bring a level of mental toughness that's been lacking in recent years, but their arrival isn't without issues.

For one, there's Leonard's looming free agency. Depending upon whom you believe, he either desperately wanted to be traded to his hometown Lakers or he preferred the challenge of building his own team without being swallowed by the shadow of LeBron James. In either case, Toronto doesn't sound like a preferred destination. There are already reports he has no desire to play there. The two sides are off to a good start.

The Spurs learned last year what kind of damage a demotivated Leonard could wreak. One year after averaging a career-high 25.5 points a game, he appeared in just nine contests because of a quad injury, and San Antonio bowed out in the first round against the Warriors in five games.

Management and the medical staff were clearly furious with him, and it sounds like his teammates weren't enthralled, either. The Raptors must convince Leonard to play hard for them -- if they can convince him to play at all -- even if he spends the season with one foot out the door before entering free agency next summer.

He's also just one player on a roster nearing a rebuild. Lowry turns 33 next season and has been in the league for 12 years. Serge Ibaka and Jonas Valanciunas are role players. Guard Fred VanFleet and forward OG Anunoby have potential, but there's no elite talent in the pipeline. While every effort will be made to retain Leonard, in reality, this feels distinctly like a one-and-done proposition.

The Celtics, meanwhile, are bursting with young talent. While we understandably focus on the return of Hayward and how he'll pair with Irving, the team's real leap forward may actually owe to the continued growth of Tatum and Brown. The former could be an All-NBA player before we know it, while the latter was already a borderline All-Star last year.

Even with Leonard, Toronto can't match Boston's mix of experience, upside, and cohesion. Stevens is entering his sixth season and is already considered one of the three best coaches in the league. The selfless culture that Nurse hopes to instill in Toronto is already well-established in Boston, especially if Marcus Smart returns for at least one more season.

So fear not, Celtics fans. The conference and division just got more competitive, but that's OK. The tougher road will pay dividends when the playoffs arrive, and make no mistake -- the Eastern Conference remains Boston's to lose.

Raptors acquire Leonard in NBA blockbuster that could be a disaster.

Tomase: These three contenders are idiots if they haven't reached out to Marcus Smart.