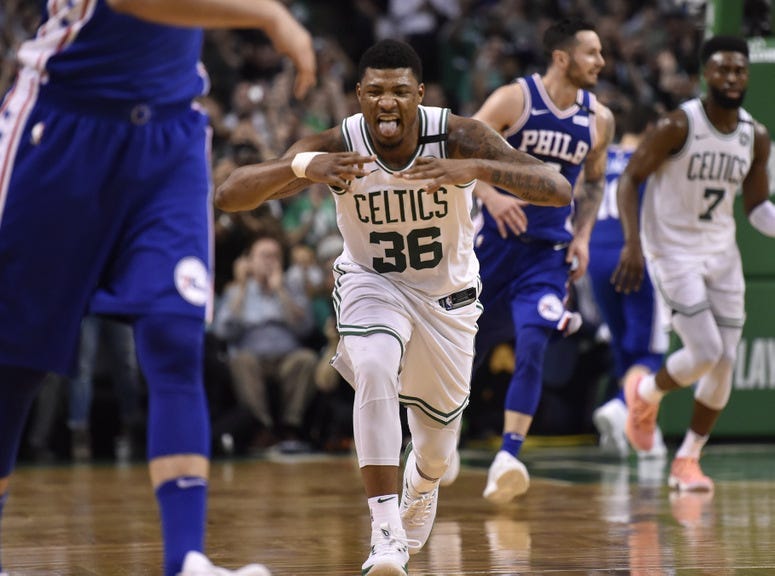 1. The Celtics took care of their own

Based on the market, it did not appear that Smart had many options. His skills fit a very specific kind of team -- namely, a contender -- and that limited his choices. It would've been easy for Danny Ainge to lowball Smart based on that diminished interest, or force him to play out the season on a $6.1 million qualifying offer before hitting unrestricted free agency next summer, but all those declarations of Smart as a heart-and-soul player clearly weren't lip service.

The Celtics stepped up in a big way to retain a core player that they always stated was their priority this summer. He'll probably never shoot straight, but given all of his other skills and intangibles, he has a home on a winning team. That team is the Celtics.

Does this feel like an overpay? Maybe a little, based purely on the market and the fact that the Celtics held all the leverage. But read on to item No. 5 for why that's not necessarily a bad thing.

2. So much for "hurt and disgusted"

It felt like a negotiating ploy at the time, and now it's hard to argue otherwise. A couple of weeks ago, the Herald's Mark Murphy reported that sources close to Smart described the player as hurt and disgusted at being ignored by the team's brass through the early portions of free agency.

Whether that actually moved negotiations is unclear, but the C's stepped up to retain him. Now they don't have to worry about a Smart with one eye on free agency next season. They comitted to him, and he's the kind of player who won't cheat them now that he's rich.

Well, this answers the question of Smart vs. Rozier, doesn't it? Had Smart played out this season on the qualifying offer, there's a chance the C's would've offered Rozier a deal along the lines of the one Smart just signed and bought out his restricted free agency a year early.

Now, with Smart in the fold, and big paydays coming for Kyrie Irving (unless he bolts, in which case Rozier's days might not be numbered) and, down the line, Jaylen Brown and Jayson Tatum, the Celtics seem to have made their choice.

Smart is probably a better fit in the big picture, anyway, since he's willing to play a reserve role and Rozier rightly views himself as a starter after guiding the C's to Game 7 of the conference finals last year.

Every big Celtics win of the last three years has seemingly included Smart on the floor in crunch time, whether it was the racing layup to beat the Raptors at the buzzer a couple of years ago or the free safety range to break up the final pass of Philadelphia's season in this year's conference semifinals.

But whom does Smart replace in crunch time moving forward when the team's starting five is legit from top to bottom? Irving, Brown, Gordon Hayward, Tatum, and Al Horford belong on the floor. Can Smart really send Irving to the bench if the C's need defense? Will he really replace the wildly athletic and rapidly improving Brown?

These are questions for Brad Stevens.

Not to get all cynical, but remember the question about Smart's deal being a tiny overpay based on the lack of suitors? That won't be the case if the Celtics need to use his salary down the road to facilitate a larger trade. By locking in Smart at $13 million annually, Trader Danny has given himself a valuable asset to make the money work should a superstar like Pelicans All-Star Anthony Davis shake free. And if Smart ends up playing out the deal, he'll likely earn the money, anyway. That's a win-win.