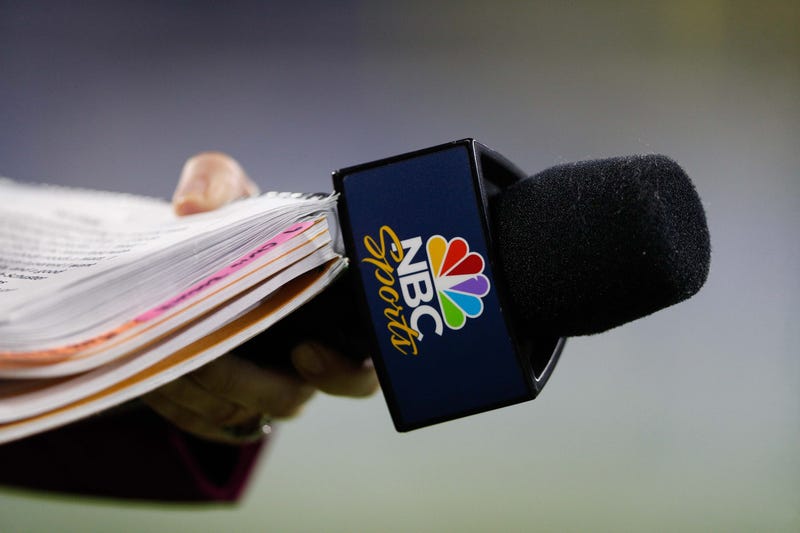 There were several major takeaways from the Patriots’ big win over the Texans Sunday: Tom Brady didn’t exhibit any rust after the strangest offseason of his career, Rob Gronkowski picked up right where he left off, and Bill Belichick looked to be in just as much control as ever following months of Patriots Palace Intrigue. But the crew at “Boston Sports Tonight” was zeroed in on another storyline.

Third-string running back Jeremy Hill tore his ACL, and will be out for the rest of the season.

Viewers who tuned into NBC Sports Boston Monday night were greeted with three minutes of Hill talk. Earlier in the day, the Patriots announced they were placing the veteran back on injured reserve. Hosts Michael Holley and Tom Giles proceeded to discuss the state of the running back depth chart, delivering uninterrupted soliloquies about Sony Michel’s health and Ralph Webb’s status. The words “Brandon Bolden” and “special teams” were uttered before Brady, Gronk or Belichick. Nineteen minutes into the show, contributor Kyle Draper, who anchors the network’s Celtics pre- and post-game coverage, finally mentioned the reported tension between Brady and Belichick that had dominated the airwaves for eight months.

That anecdote encapsulates the main problem with “Boston Sports Tonight,” the multi-hour sports talk show that NBC Sports Boston launched in April 2017 as part of their rebranding effort. “Sports Tonight,” the half-hour late-night show anchored by Michael Felger, was scrapped in favor of BST, which was promoted as a “cross section of opinion, information and fun.” The show aired from 9:00 p.m. until midnight and featured four main hosts: Tom Curran, Holley, Giles and Boston newcomer Kayce Smith. (“Early Edition,” hosted by Gary Tanguay and Trenni Kusnierek, was also expanded from 30 minutes to two hours.)

Seventeen months later, “Boston Sports Tonight” has been reduced to two hours. Curran is no longer a host, and Smith left in February to take a job at Barstool. She was replaced by Danielle Trotta, a veteran sports reporter who primarily covered NASCAR before coming to the Bay State.

NBC Sports Boston senior news director Kevin Miller declined to be interviewed for this article, and did not respond to a list of questions sent prior to publication.

Since the early aughts, NBC Sports Boston –– formerly Fox Sports Net New England, then Comcast SportsNet New England –– has featured nightly debate shows with many of the city’s familiar personalities and sportswriters. Though these programs never generated the traction of their sports talk radio equivalents, for obvious reasons, they did occasionally produce viral clips and contribute to the ongoing sports dialogue. Perhaps most notably, Tanguay and Kirk Minihane once got into an epic shouting match about Belichick’s culpability for Aaron Hernandez’s alleged murderous spree. The segment was replayed on news shows across the country.

In their previous forms, “Early Edition” and “Sports Tonight” were fast-paced programs, rifling through the issues of the day. While much of the content was rehash –– the topics had usually just been dissected for 12 hours on the sports radio airwaves, often by the same people who were opining on them at night –– the shows were digestible. They also featured lots of debate. Oftentimes, segments would turn into a scream-fest between Felger, Tanguay and the guest de jour who drove up to Burlington for seven minutes and their $200 check. Not bad work if you can find it.

While “Early Edition” still resembles that older format –– albeit, in a longer time slot –– “Boston Sports Tonight” is bereft of much energy. Too often, it comes across like the hosts are regurgitating rehearsed lines at each other. On Monday’s show, for example, Giles said he is concerned about Gronk going over the middle of the field. Trotta rebutted his claim, saying she doesn’t want the Patriots to “baby” or “pussyfoot” their star tight end. Giles did not respond, however, and Trotta quickly went back to talking about Gronk’s lack of reps in the preseason.

The most tension-filled segment of Monday’s show came at the end of the first hour, when Holley and DJ Bean went at it over Serena Williams’ blow up at an official. Holley said the backlash against Williams is sexist, whereas Bean said she shouldn’t be praised for losing her cool. It was captivating and engaging.

But after a couple of minutes, Trotta stopped them and threw to break. On the other side, Holley and WBZ's Michael Hurley were standing at a touch screen ready to analyze “who’s up” and “who’s down” after the Patriots’ win. The liveliness was noticably zapped from the room.

Unlike radio, television isn’t always conducive to unwieldy arguments between hosts, because shows are stringently planned out and commercial breaks must be hit on time. That’s why the 30-minute, PTI-type format works so well. It forces personalities to skip the fluff, and get right to the polarizing topics of the day.

When BST debuted, the pitch was that it would resemble a talk radio show, with hosts reacting to the night’s events in real time. But in actuality, it functions like a talk radio show without most of the components that make radio programs click, such as bits, callers, riffs and debates that last for more than three minutes.

On Tuesday, the two-hour time slot did allow the hosts to react to Chris Sale’s one-inning return before the Red Sox game had ended. While that’s nice in theory, it’s hard to imagine scores of Boston sports turning off the Red Sox early in order to get Tom Giles’ thoughts on Sale’s night. And the ratings show they aren’t. Last week, “Boston Sports Tonight” averaged an 0.2 rating for men 25-54. “Early Edition,” conversely, pulled an average number of 0.5 last week in the target demo.

There isn't much of a reason to watch BST, unless you're related to one of its hosts. The show features the same warmed-over sports talk we hear all day and lots of filler. Portions of Monday's and Tuesday's offerings were dedicated to talking about whether J.D. Martinez truly doesn't care about his season home run total (he says he doesn't), the Marcus Cannon-J.J. Watt matchup on the line of scrimmage and gawking over Kyrie Irving's latest offseason workout at Harvard. These are not discussions that any real people are having.

BST was hyped as a new and innovative addition to Boston’s already well-saturated sports talk scene. But right now, it’s an expensive afterthought that runs 90 minutes too long, without much of the promised fun.

Tanguay’s dulcet tones won’t be returning to WEEI any time soon: With Minihane on indefinite leave, the “Kirk & Callahan” depth chart is a little thin. But an old mainstay says he won’t be coming back, despite rumors to the contrary.

In a brief phone call with me, Tanguay said he has no plans to return to K&C. “I don’t want to put the time in," he said. “I just don’t want to be a jerk. The show makes me say things about people who aren’t there that I regret.”

While the door for Tanguay is seemingly always ajar, right now it looks far closer to being closed. Oh well. More airtime for me.

Red Sox ratings are best they’ve been in five years: The Red Sox have more to celebrate this week than their 100th win. The club is enjoying its best ratings since 2013, the last time it hoisted a championship.

Through 146 games, NESN is averaging a 6.8 household rating, which is 23 percent higher than last season at the same point. In 2013, the Red Sox averaged a 7.3 household rating.

Predictably, the numbers are on an upswing since the All-Star Break. Over the last two months, the Sox have averaged a 7.8 number, with 18 of the 20 highest ratings of the season coming over that span. NESN’s ratings are second-highest in baseball, next to St. Louis.

Over the last year, Breer has distinguished himself as one of the NFL reporters most likely to carry the owners’ water on Colin Kaepernick’s blackballing. Last year, he penned a column blaming Kaepernick’s unemployment on his lack public lobbying to remain in the league.

As Mark Leibovich chronicles in his excellent read, “Big Game: The NFL in Dangerous Times,” the NFL Insiders that populate TV screens everywhere are more PR agents and scoop traders than anything else. Breer appears to fit that mold to a tee.