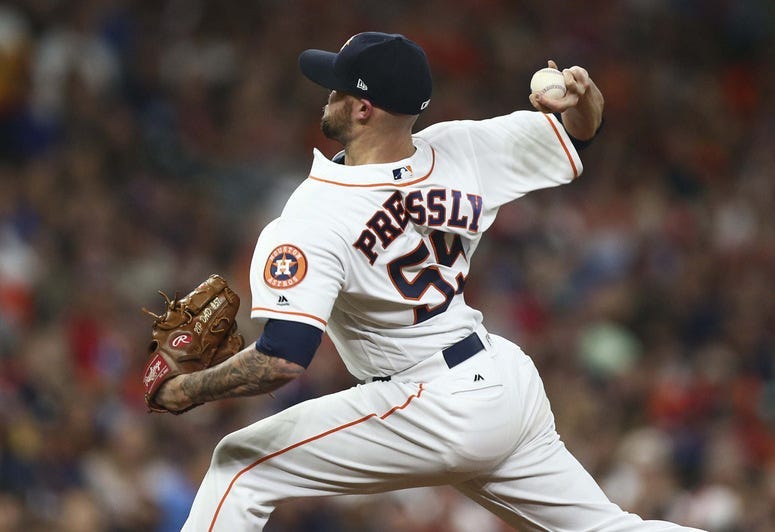 The Red Sox entered the trade deadline with one glaring need: bullpen. They failed to address it, instead seeking upgrades on the bench (Steve Pearce), at second base (Ian Kinsler), and in the rotation (Nathan Eovaldi). It's fair to say that trio has represented a net positive, even with Eovaldi regressing recently.

What they didn't do was improve a bullpen that staggered into September. On Saturday in Chicago, president of baseball operations Dave Dombrowski spoke with reporters and noted that many reported trade targets have struggled anyway.

"When you look at a lot of the pitchers who had been discussed around the trading deadline from a bullpen perspective, a lot of them have scuffled too," Dombrowski said. "Just because you mention names doesn't necessarily mean they make you better at that particular point."

Does Dombrowski's argument withstand scrutiny? Have many of the pitchers moved in July actually scuffled? On the whole, the answer is no. Of the 20 relievers traded before July 31, the Red Sox could've thrown a dart and still come up with 65 percent chance of improving.

Beginning with the June trade of Royals closer Kelvin Herrera to the Nationals, the 20 arms moved by July 31 ranged from All-Star closer Brad Hand, who joined Cleveland from San Diego on July 19 for the best catching prospect in baseball, to Rangers closer Keone Kela, whom the Pirates snuck in under the deadline.

Nine of the 20 relievers traded have posted ERAs under 2.60 with their new teams, and even if that's not the most rigorous statistical measure, it's at least a snapshot. Two others were below 2.00 until getting rocked on Saturday night. Of the out-and-out busts, the Red Sox weren't linked to any of them, be it Dodgers righty John Axford (16.20 ERA, broken leg), Phillies lefty Aaron Loup (9.00 ERA), Cubs righty Brandon Kintzler (8.38) or Mariners lefty Zach Duke (7.71).

Plenty of effective relievers were moved for relatively small returns. The Cubs acquired righty Jesse Chavez from the Rangers for fringe prospect Tyler Thomas. Chavez has responded with a 1.07 ERA in 19 appearances while stranding five of six inherited runners.

The Braves acquired a pair of useful relievers for international bonus money, landing Orioles righty Brad Brach and Rays lefty Johnny Venters. Between them, they've allowed two runs in 26 innings, with Venters limiting left-handed hitters to a .146 batting average in his return from three and a half Tommy John surgeries.

Staying in the AL East, the Blue Jays shipped Korean right-hander Seunghwan Oh, their best reliever,  to the Rockies for a pair of mid-level prospects. The 36-year-old had compiled a 2.68 ERA with Toronto and he's been even better in the thin air of Colorado, going 1-0 with a 1.84 ERA and 15 strikeouts in 14 1/3 innings for the resurgent Rockies.

The A's already had a loaded bullpen when they aggressively targeted Mets closer Jeurys Familia. They surrendered two middling prospects and $1 million in international bonus money. Familia has responded by making one of baseball's best bullpens even better, with a 2.57 ERA and 28 strikeouts in 21 innings. He's 4-1 for the AL West club hoping to play spoiler.

Then there's Ryan Pressly. The hard-throwing right-hander with one of the highest swing-and-miss rates in baseball went from Minnesota to Houston for a pair of highly regarded prospects. The Red Sox, likely couldn't have matched the return from their depleted farm system. All Pressly has done since joining the Astros is post a 1.32 ERA in 14 appearances while averaging more than 11 strikeouts per nine innings.

The prospect haul wasn't nearly as high for Rangers left-hander Jake Diekman. He rode a bullpen cart to Arizona for a pair of low-level minor-leaguers and has responded by posting a 3.68 ERA in 12 appearances while striking out nearly two batters an inning.

His former Texas teammate, Kela, was traded for a borderline top-10 prospect in the Pirates system. That feels like a small price to pay for a 25-year-old reliever with three more years of team control. He allowed one run in his first 14 games with the Pirates before experience his first hiccup on Saturday, allowing four runs and taking the loss against the Braves. Still, he has struck out 22 in 14 1/3 innings with Pittsburgh after recording 24 saves in Texas.

Another experienced reliever moved at the deadline: White Sox right-hander Joakim Soria, who posted a 1.74 ERA in his first 12 games with the Brewers before allowing four runs in Saturday's loss to the Nationals. He has blown two of his last three appearances in Milwaukee, to be fair.

We'll give the Red Sox a pass on two other relievers. Seattle's Sam Tuivailala blew out his Achilles five games after arriving from the Cardinals. And the Red Sox never engaged on Toronto closer Roberto Osuna in the wake of credible accusations of domestic abuse.

Now for the names linked to the Red Sox. Left-hander Zach Britton has been middling in 15 appearances with the Yankees, posting a 4.70 ERA, while the same can be said of old friend Brad Ziegler (5.06) in Arizona. And Herrera, the man the Red Sox believed they had acquired until the Nationals nixed the deal, posted a 4.34 ERA in Washington before suffering a season-ending foot injury last week.

But since when do the Red Sox -- or any other team -- need to limit their trade options to those discussed in the media? There were a dozen effective relievers moved in July, and the Red Sox whiffed on all of them.