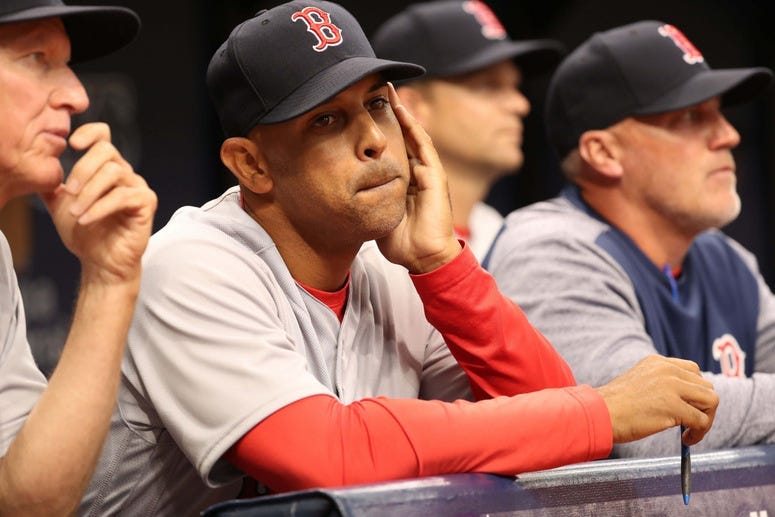 Oh, to be a fly on the wall in John Farrell's kitchen.

If the phrase, "Ain't as easy it looks," were muttered, would anyone object? Same goes for, "See? It wasn't me."

Welcome to Boston, Alex Cora. Hope you brought a helmet.

The new Red Sox manager debuted on Thursday in St. Petersburg, and for seven innings, he pranced merrily like a Hobbit in the Shire. Chris Sale dominated. Xander Bogaerts cranked up his launch angle. Eduardo Nunez provided a spark.

As the bottom of the eighth began, Cora made his first, "Oh . . . huh?" decision, summoning Joe Kelly instead of Carson Smith from the bullpen, not that it really mattered. The punchless Rays had managed exactly one hit.

Turns out the order of operations might've been irrelevant, because neither reliever could throw a strike. By the time they were done blowing a 4-0 lead in breathtakingly incompetent fashion, Cora had received his first lesson in managing the Red Sox:

It's always your fault.

"It's baseball," Cora told reporters. "We all know it's going to happen. I guess get it out of the way right away."

That's not to say he deserved no blame. He lost the clubhouse, and he'd be the first to admit the buck stopped with him. He was accountable.

Cora needed only one game to experience the first loss he'll similarly wear like a stockade, even though others deserve larger slices of blame.

Kelly reeked like festering garbage. He went walk-strikeout-double-walk-walk before being yanked as ace reporter Jim Buchanan clutched his Edgar Winter hair and winced in shame. Cora chalked the decision simply to "matchups."

Smith might've been worse while going walk-strikeout-triple-single as five runs scored. He also threw a ball to the backstop that didn't plate a run only because Tropicana Field is made of cement.

Both were horrible, but no matter. These are Cora's problems now. In the immediate aftermath, we asked two questions. Where was rookie lefty Bobby Poyner, and why didn't closer Craig Kimbrel record a four-out save?

Cora delivered reasonable answers. Poyner has never thrown a pitch above Double-A and Cora didn't want his debut to come with the bases loaded and the game on the line. Kimbrel, meanwhile, only arrived in camp last week after spending nearly a month with his infant daughter at Children's Hospital during multiple heart surgeries. Cora announced days ago he wouldn't be rushed into a multi-inning appearance.

Of course, Farrell explained failed decisions, too. You may not have agreed, but his reasoning could usually be defended. That didn't stop #firefarrell from trending after every loss. Eventually, #cancora will find a home in your friendly neighborhood Twitterverse, too.

A better second guess than how Cora deployed his best setup men against an impotent offense with a commanding lead would be why the Red Sox built a roster without a proven left-handed reliever in the first place. President of baseball operations Dave Dombrowski was asked all winter about adding one and basically shrugged, "Ehhh." Cora, perhaps spoiled by overpowering reliever Chris Devenski in Houston, insisted he didn't need one as long as his righties could get the job done.

The only problem is no reliever on the roster features the stuff of Devenski, who limited lefties to a .111 average from the right side last year. If Cora didn't want to use Poyner against Denard Span, who batted only .226 against lefties last year, then why is he even on the roster? That's a team-building issue more than a Cora issue, if we're being objective.

Except we're not! That's not the way we work. No loss portends more doom than Opening Day. If it's a complete and utter disaster -- like it was for Theo Epstein and closer by committee 15 years ago in this very same deflated birthday cake of a ballpark -- then it makes for 24 hours of feverishly despairing extrapolation. The bullpen must be overhauled before it's too late because OH MY GOD DID STANTON JUST HIT ANOTHER ONE!?! (Yes, the Yankees make this worse).

The good news is the Red Sox return to action on Friday and the Rays remain anonymously terrible. Boston could be 6-1 next week, making this one a footnote.

Welcome back to Boston, and good luck sleeping. Your best-laid plans are already leeching toxins in a landfill. Meanwhile, guests sip mojitos in John Farrell's kitchen, the most relaxed spot in America.