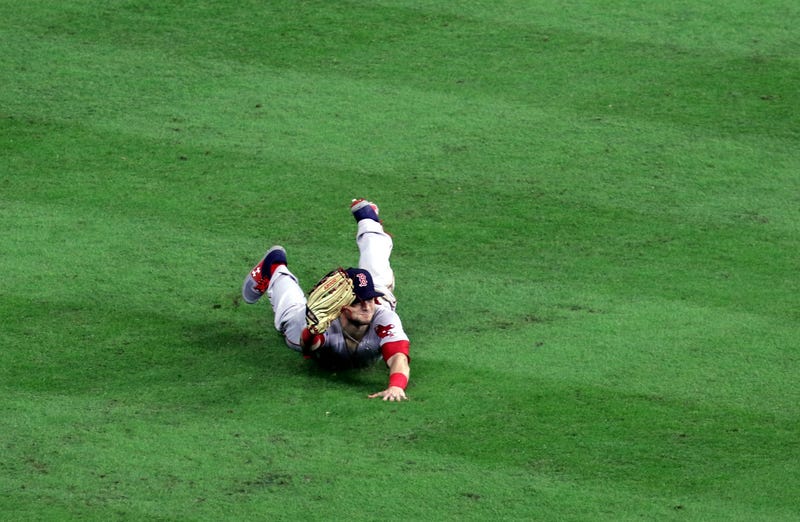 Baseball does postseason drama right and everything else wrong.

The Red Sox and Astros engaged in a legitimately unforgettable Game 4 on Tuesday night. From the Jose Altuve homer that wasn't to Jackie Bradley's heroics to Andrew Benintendi's insane balls-out catch to end it, Boston's 8-6 victory had everything.

If you managed to stick around until the final pitch, you witnessed an instant classic.

If you didn't, well there's the problem.

Over the course of, I dunno -- 19 hours? -- the two squads interspersed big hits, heart-stopping defense, and wild emotional swings with all manner of nothing.

The game became the thing that happened between all the stoppages, and if you think I'm exaggerating, consider this: a fan could've departed Logan at first pitch and landed at George Bush in time to catch the ninth inning in person.

How baseball thinks this is good for the game is anybody's guess. Had the two clubs compacted the exact same action into three hours, we'd be gushing.

Instead, we're left in the depressingly cruddy position of bemoaning a tremendous game delivered in awful packaging. I'm guessing the bulk of you retired before the final pitch. Baseball claims to care, but its inaction suggests otherwise.

What's clear is the paranoia that caused the Astros to post an intern in the camera well next to the Red Sox dugout like a tourist has infected the product on the field, but the fear of technological gamesmanship is by no means the only factor making viewership a battle of attrition.

The confluence of factors leading to this point is a case study in missing the big picture because your nose is pressed against the mirror. The MLBPA has resisted efforts like the pitch clock to accelerate pace of play. An over-reliance on replay has robbed games of rhythm. Late start times on the East Coast deprive half the country of a realistic opportunity to witness the final out. The zealous protection of signs after a season featuring more strikeouts than hits feels … unnecessary.

It's apparent the game has lost its way when in the span of 24 hours:

1. The Brewers and Dodgers play a five-hour, 13-inning game featuring 32 strikeouts and only 15 hits. Cody Bellinger's walk-off single was wildly dramatic. It also happened around the time I was getting up for Kirk & Callahan.

2. The Brewers take the whole “opener” concept to absurd lengths in Game 5, with left-handed starter Wade Miley throwing five pitches before being replaced by right-hander Brandon Woodruff to exploit platoon advantages. The Brewers utilize six pitchers, four of whom don't even throw an inning. They lose anyway, and Miley will start Game 6.

3. The Red Sox and Astros deliver a hell of a Game 5, but the nine innings last four hours and 33 minutes, thanks to countless reviews, 10 pitching changes, and all manner of baseball ephemera. Both teams treat every pitch like elimination hangs in the balance. That's not necessarily a good thing.

If you lasted until the final out, you saw Craig Kimbrel survive another heart attack outing. If you didn't, at least you might have a productive morning of work.

And that sucks, because the final out was a thing of beauty, Benintendi making the split-second decision to sell out on Alex Bregman's sinking liner with the bases loaded. If he catches the ball, the game's over. If he misses, the game's over. In only one of those scenarios do the Red Sox win, and he delivered.

The mixture of jubilation, exhilaration, and defiance on Benintendi's face as he sprang to his feet – like, “(Bleep), yeah, I just dove for that ball!” -- is why we watch sports in the first place. The Red Sox have delivered those moments more frequently than anyone this year.

We need more of that and less of everything in between, unless baseball wants six-hour playoff games to become the norm. There's beauty in the sport's lack of a clock, but a growing drudgery, too. Playoff games shouldn't start one day and end the next.

There's a name for that sport, and it's cricket, and there's a reason no one plays it here.