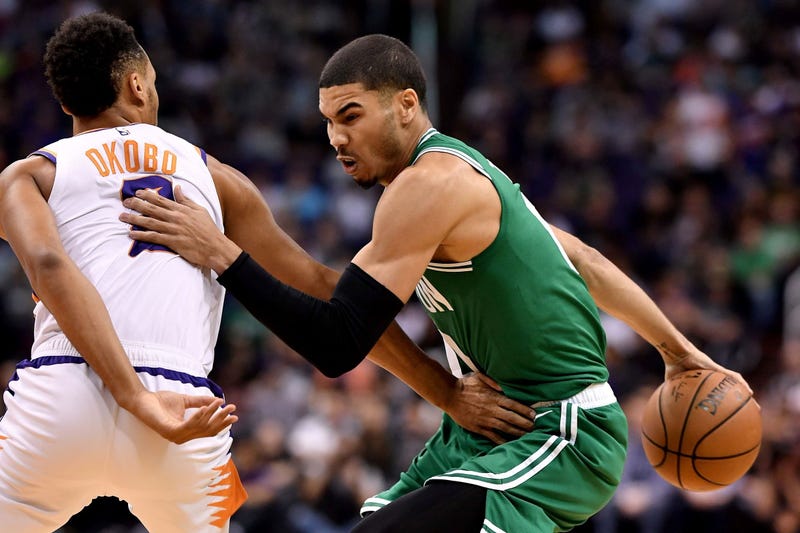 Jayson Tatum worshipped Kobe Bryant as a kid, so when he got the chance to work with his idol this summer, how could he refuse?

The Celtics can be forgiven for wishing he had.

A month into Tatum’s sophomore campaign, the talented 20-year-old has regressed. When last season ended, he was Boston’s best player in an Eastern Conference Finals loss to LeBron James and the Cavaliers. Tatum’s vicious Game 7 dunk on the King, followed by a 3-pointer, gave the Celtics their final lead of the season.

James took notice, sharing an extended embrace with Tatum and offering words of encouragement moments after the game. So did Bryant, who had already broken down one of Tatum’s possessions in the Mamba version of the Belistrator.

The two worked out one-on-one over the summer, when Bryant offered Tatum some damaging advice.

“Shoot every time,” Bryant told Tatum, per GQ. “Pass if you have to. But if not, shoot it.”

There’s obviously an element of humor in that, but watching Tatum early this season, at times it feels like he missed the joke.

Of all the phrases to describe Bryant’s approach to scoring, “high volume” probably tops the list. He took nearly 20 shots a game over his 20-year career, including a staggering 27 a night when he averaged a career-high 35.4 points in 2006.

It wasn’t just the torrent of shots, but the type. Kobe grew up worshipping Michael, and Jordan made his living not just soaring to the hoop, but torturing defenders with all manner of mid-range fallaways.

Those shots made sense in the ‘80s and ‘90s. They still had a place in the 2000s. But in today’s NBA, they’re recognized as wildly inefficient, and unfortunately, Tatum has taken a Mamba mentality that runs counter to (a) the way the game is played, (b) the Celtics offense, and (c) Tatum’s skillset.

Tatum isn’t Kobe! He's not a ball-dominating one-on-one monster off the dribble. He’s George Gervin, to go older-school – long and angular and explosive at the trim precisely because of his length.

Sometimes it looks like if Tatum tore off his Celtics jersey, there’d be a purple No. 24 underneath. He pounds the ball, back to the basket from 16 feet, aligning his footwork for . . . what, exactly? A contested, flailing, off-balance fallaway that’s only missing the balletic Kobe-Michael leg kick.

Deadspin has accused Tatum of suffering from “Kobe brain,” and it’s a fair description. One of the greatest sins in today’s NBA is the long 2-pointer. Why take a 21-footer when an extra step back offers the possibility of a 50 percent greater payoff?

As Celtics coach Brad Stevens noted before Friday’s loss in Utah, one byproduct of the league’s focus on 3-pointers is an increase in layups. Extended defenses are susceptible to backdoor passes, which  make the Golden State Warriors every bit as entertaining as their dead-eye marksmanship.

Tatum has at least momentarily lost sight of this, though Friday’s loss to the Jazz was encouraging. He scored 21 points on an efficient 7-of-14 shooting, and all but one of his shots came either at the rim (5-for-9) or from beyond the 3-point line (2-for-4). He made at least half his shots for just the second time this season, which will hopefully reinforce the lesson that he doesn’t need to go chasing his offense.

What made him so effective last year was how he scored in the flow of the offense. Why pull up when you can catch and shoot? Why pound the ball when a teammate can set you up for an easy look? Why take a 17-footer when, with a little patience and ball movement, it can become a layup?

Tatum is young and he’s learning. He plays for one of the best coaches in the league. There’s no reason to think this is anything more than classic growing pains.

In the meantime, let’s not take any chances: for now, if Kobe Bryant calls, let it go straight to voicemail.