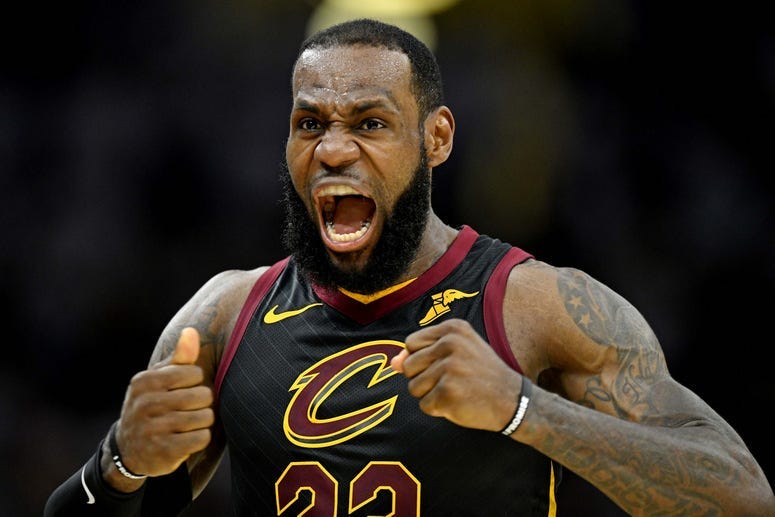 LeBron James should have only one thought as he enters free agency: championships.

The Celtics should have only one concurrent thought: championship window.

That extra word makes all the difference, and that's when it hits you: James needs the Celtics more than they need him.

It's crazy, on one level, to say the Celtics don't "need" the best player in the NBA. Surround him with crap, and he drags that foul, festering mess to the Finals. Surround him with burgeoning talents like Jaylen Brown and Jayson Tatum, not to mention All-Stars Gordon Hayward and Al Horford (we'll get to Kyrie Irving), and how are the Celtics not legitimate contenders?

If we're focused solely on next season, it's pointless to argue against James. The C's could stand toe-to-toe with the Warriors and maybe even hoist banner 18.

But Danny Ainge hasn't patiently constructed a contender in the short- and long-term just so he could blow it up the first time an aging star became available. That's where the window enters the equation, and that's where James suddenly doesn't look like such a great fit.

The Warriors are a force of nature, and Ainge wants to be positioned to pounce if and when Steph Curry and Co. hit a pebble while descending the mountaintop. Maybe that process starts next summer with Klay Thompson's departure in free agency. Maybe injuries waylay the relatively frail Curry. Maybe Draymond Green kicks the wrong guy in the junk. Maybe whatever in-fighting David West cryptically referenced after this latest title brings the whole thing down from the inside.

Or maybe, more likely, the Warriors keep winning for another three or four years, since Curry, at 30, is the oldest member of the Big Four.

In that case, do the Celtics want to throw the window wide open this summer, or do they want to stay the course and keep building on their current trajectory, which allows for contention while maintaining the flexibility to add superstars in intervals when Horford's and then Hayward's contracts expire? Even if that money is simply used to extend Brown and Tatum, potential lottery picks from the Kings (2019) and Grizzlies (2021) offer the unique possibility of replenishing young talent while contending.

James explodes all of that. He turns 34 in December and probably isn't interested in developing the next generation of Celtics. Teams featuring LeBron tend to go all-in on the here and now, partly because he's always a threat to leave, and partly because his presence demands it. It's hard to envision 36-year-old LeBron welcoming a 19-year-old in the draft.

The first casualty of his arrival would almost certainly be Irving, who forced his way out of Cleveland to forge a path that didn't involve drafting behind No. 23. Remove Irving and the C's transform from a team built around a bunch of 20-somethings and Horford to one led by James as he enters the back stretch -- which, to be fair, could last five or six years, the way he's going.

Now let's flip it around and look at this from James' perspective. His 3-6 record in the Finals is the lone blemish on a resume that would otherwise make a compelling case for best ever. Michael Jordan (6-0), Tim Duncan (5-1), Kobe Bryant (5-2), and Magic Johnson (5-4), among others, all rate ahead of him since 1980. Curry, meanwhile, is 3-1 entirely at James' expense.

There are plenty of destinations that could deliver James a title. The Rockets nearly beat the Warriors in the conference finals. The 76ers are already Vegas favorites to win the East. The Spurs always find a way. Even the Lakers, if James lures the right gang, could surprise.

But there's no team outside of Golden State better situated to contend for the next five years than the Celtics. For one, the path is clearer in the East. For another, hitching your wagon to the Rockets requires faith in 33-year-old point guard Chris Paul staying healthy, which almost never happens come the postseason. It's also possible that acquiring James would cost the Rockets stalwarts like Clint Capela and/or Eric Gordon.

The Sixers are intriguing, too, but their roster isn't an ideal fit, not with 6-10 point guard Ben Simmons reluctant to shoot and a poor candidate to play off the ball.

The Celtics, meanwhile, could absorb James while keeping him surrounded by young talent. The lack of said young talent is probably what has limited his hunt for titles more than anything over the years.