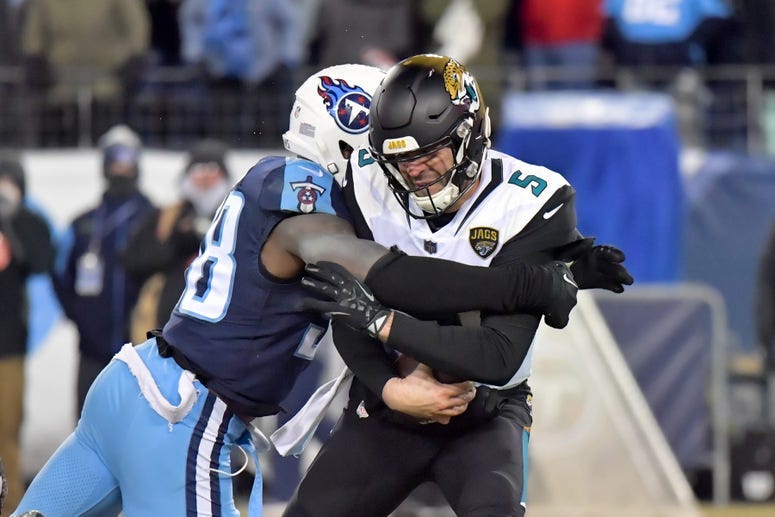 Diesel up those Duck Boats, because we know how this story ends.

I'm not even going to bother doing the research, because there's no way the disparity between the final four QBs has ever been greater. Brady is a Hall of Famer and the greatest quarterback that ever lived. Bortles serves as a recurring punchline on NBC's "The Good Place" to torment a Jags fan in Hell. Keenum spent six years in college throwing for like 5,000 yards annually and then wasn't even drafted. Foles should've lived out his days as Carson Wentz's backup.

Brady faces Bortles on Sunday in an AFC title game that we'll try to convince ourselves will be competitive because of "Jacksonville's defense," conveniently ignoring the fact that said defense just got shredded for 42 points by the Steelers and is only three weeks removed from watching Brady's understudy, Jimmy Garoppolo, drop 44 points with the 49ers. (Alex Guerrero should probably leave the doors unlocked at TB12 this week, just in case).

Once Brady finishes sending the Jags back to Florida, it'll be our solemn duty to hype either the Vikings' unprecedented Super Bowl home-field advantage, or Foles's place as the game's best backup, playing in front of Philly's stout defense.

The reality is far simpler. Brady's not losing to any of these jamokes. Make room for another banner, give the first 40,000 fans at next year's opener Roger Goodell colostomy bags, and call it a day.

It didn't have to be this way. The weekend started with three legitimate threats very much alive. Pittsburgh's Ben Roethlisberger owns two titles and nearly beat the Patriots in December. He was a monster against the Jags, throwing for 469 yards and five touchdowns. He also tossed a pivotal interception and had a fumble returned for a touchdown in Sunday's shocking 45-42 loss. Sorry, Big Ben. The bell tolls for thee.

Atlanta's Matt Ryan is the defending MVP and has started a Super Bowl, you may recall. He led the Falcons on a late-season charge which included an impressive 26-13 victory over the Rams in the wild card round. Could lightning strike again against Foles and the Eagles on Saturday? Nope. Philly choked out all the oxygen and Ryan sputtered home a 15-10 loser.

That left former Super Bowl MVP Drew Brees of the red-hot Saints. New Orleans had Minnesota beat on Sunday after rallying from a 17-0 hole to take a 24-23 lead with 25 seconds left, but Saints safety Marcus Williams picked a bad time to play the role of a low hurdle, which Vikings receiver Stefon Diggs miraculously cleared en route to a stunning 61-yard TD on the game's final play.

As Tommy Heinsohn used to say, bing, bang, boom. Just like that, the possibility of Brady squaring off against Roethlisberger, Ryan, and/or Brees gave way to Blake Bortles, Case Keenum, and Nick Foles. If those three had any respect for the game, they'd stay home.

It would take the impossible for one of them to hoist the Lombardi Trophy and displace Trent Dilfer as the worst quarterback ever to win it all. That's just not going to happen. Infinitely more likely is that they'll kneel before Brady's King in the North and join the list of forgettable QBs to lose a Super Bowl to a true star, a group that includes Chicago's Rex Grossman (vs. Peyton Manning in 2007), Carolina's Jake Delhomme (vs. Brady in 2004), Atlanta's Chris Chandler (vs. Denver's John Elway in 1999), and Pittsburgh's Neil O'Donnell (vs. Troy Aikman in 1996). While we're at it, Vince Ferragamo, David Woodley, and Tony Eason say hi, too.

The Patriots have faced their share of challenges this year, from the woeful opener against the Chiefs to the mediocre 2-2 start to the soap opera melodrama rattling their three pillars of greatness.

The path forward, however, is as clear as a Gisele's complexion. All Brady must do to surpass boyhood idol Joe Montana is beat two among Blake Bortles, Case Keenum, and Nick Foles.

When should we throw the parade? How about tomorrow?