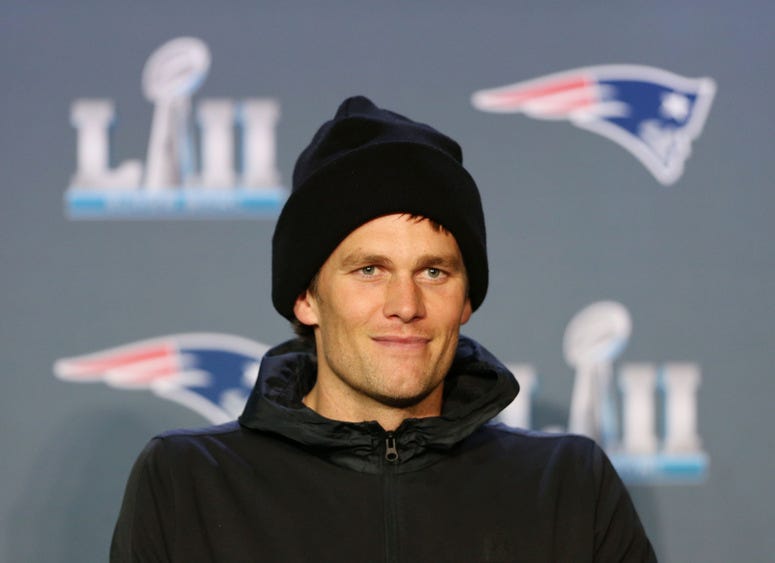 Being a star in Boston means wearing a target.

David Ortiz raised millions for charity, dominated until he retired at age 40, and brought three World Series titles to a franchise that hadn't won in 86 years. But we still crushed him over his contract demands, or poking his head into a press conference to demand an RBI, or appearing on a murky 2003 performance-enhancing drugs list.

Paul Pierce raised millions for charity, scored more points in a Celtics uniform than Larry Bird, and brought Boston its first NBA title in more than 20 years with a transcendent 2008. But still we crushed him over failing to ID the punks who stabbed him in 2000, or for the occasional post-injury wheelchair/head wrap, or for being part of the disgraceful 2002 World Championship team that finished sixth on home soil.

And that brings us to Tom Brady. The Patriots quarterback has done nothing but win with class since becoming starter in 2001. We know his resume: five Super Bowls, with a sixth looming on Sunday, and the reputation as the greatest winner in NFL history. His accomplishments are unassailable.

But he has taken his share of arrows over the last couple of years, from Deflategate to Alex Guerrero to Donald Trump to Floyd Mayweather to Best Buddies to a supposed power struggle with head coach Bill Belichick. Sometimes it feels like the negative headlines outweigh the positive ones, and yeah, I've written my share.

At times like these, however, we should note that Brady has spent his entire career acting like a decent human being, as he illustrated on our very own airwaves this week.

WEEI's Alex Reimer is young, talented, and glib, and last Thursday night he pushed things too far with his characterization of Brady's 5-year-old daughter as an annoying little pissant. He was trying to be funny and he'd undoubtedly take it back if he could, but the resulting firestorm nearly engulfed him.

When Brady very politely told Kirk & Callahan on Monday that he'd have to re-evaluate his weekly appearance on the station, Reimer's name trended from coast to coast. It didn't help that this has been a slow, boring Super Bowl week. News organizations were looking for something to drive traffic and Brady defending his daughter provided it.

It's not hyperbole to suggest that Brady held the young talk show host's future in his hands when he conducted his introductory press conference in Minneapolis on Monday night. Express outrage and condemnation, and the writing would be on the wall. Offer forgiveness and request mercy, and Reimer might survive.

"Look, I think we all go through our life and sometimes we say things we shouldn't say or make mistakes, and that happens," he said. "I can express it and you move on. . . . I certainly hope the guy is not fired."

Brady reinforced those themes when he met with hosts Kirk Minihane and Gerry Callahan before Wednesday night's press conference. Cameras caught the trio laughing and smiling, and Minihane later described Brady as gracious.

"He genuinely does not want (Reimer) fired," Callahan said on the air on Thursday. "He said, 'I don't want him fired.'"

In an age when we get restless if someone becomes too popular, seems too perfect -- it will probably be Steph Curry's turn in the barrel soon -- it's useful to take a step back and consider how Brady has conducted himself throughout his Patriots career. I recognize it's a dangerous game to declare someone "good" or "bad" when we don't really know them, but Brady has been here for nearly two decades, and we can certainly judge his behavior.

He has comported himself with dignity in victory and defeat. He has served as the gracious, respectable face of a franchise that can be a little rough around the edges when it comes to gruff head coach Bill Belichick or some defiant moments from ownership. He practices what he preaches regarding positivity, as he illustrated with his compassionate response to Reimer, a 20-something still finding his way who deserves a second chance.

Brady has insisted in public and private that Reimer shouldn't lose his job. He very easily could've said nothing and let the station decide, or he could've made it clear that he'd never appear on our airwaves again. Instead he reacted with kindness. It's a measure of his character.

I'll leave you with a scene that should resonate with all fathers of young girls. As the third episode of Tom vs. Time ends, Brady is resting on his couch, reflecting on a 6-2 start and the challenges that await. His daughter, Vivian, bounds into the room and onto his lap.

"Daddy, I have to show you something," she says. "Daddy, quick! Come!"

Brady snaps his fingers and pulls himself off the couch to follow her. "Boss me around!" he announces with that combination of weariness and unconditional love familiar to any parent.

It was a regular-guy moment from someone who in the course of 18 years here has given us virtually zero reasons to think he's anything other than a decent human being.

There will be further controversies before all is said and done, but whatever they are, that much is worth remembering.