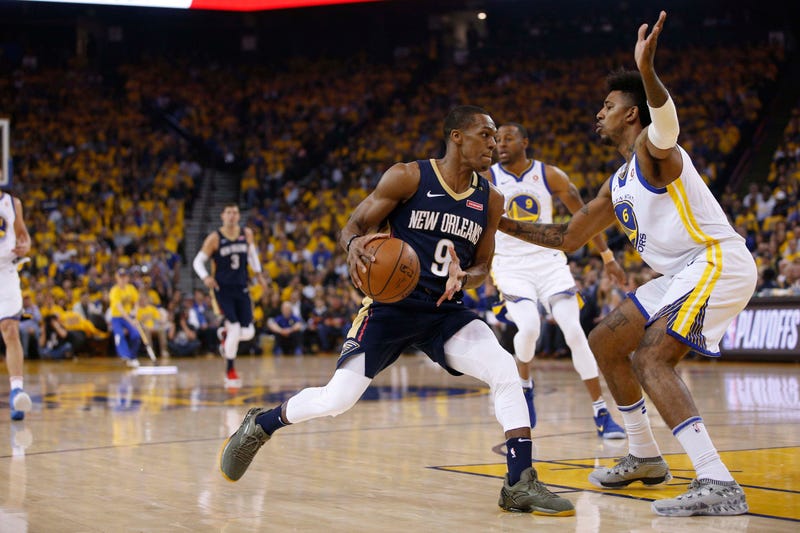 Playoff Rondo is back, and he’s full of pettiness and double-doubles.

Rajon Rondo has been a strong contributor to the Pelicans this postseason, averaging 12.7 points, 12.7 assists and 7.5 rebounds per game. New Orleans swept the Blazers in the first-round of the playoffs, earning a second-round matchup against the Warriors. The Pelicans promptly dropped the first contest of the matchup last week.

While there’s little doubt Golden State will win the series, the Pelicans put up a fight in Game 2 Tuesday. They were within striking distance up until the final 30 seconds, when Warriors forward Draymond Green walked to the free-throw line with a six-point advantage. That’s when Rondo decided to attempt a sweaty Hail Mary.

After Green hit his first free-throw, Rondo intercepted the bouncing ball and proceeded to rub it against his body. Surprisingly, Rondo was not called for a delay of game violation.

Rajon Rondo wiping his sweat all over the ball before Draymond attempted his second free throw gotta be the pettiest thing ive ever seen -- pic.twitter.com/AoKkBPAXJr

The rubdown, purportedly designed to make the ball slippery, did very little. Green hit his second free-throw without incident.

That was not the first time Rondo poked at Green Tuesday. The two players got into each other’s faces before halftime, prompting TNT analyst Charles Barkley to plead for somebody to hit Green in the face.

Rondo probably won’t do that, but it seems as if he’s intent on irritating Green. In Game 1, Rondo went for five after Green had missed a foul shot.

Given Green’s penchant for kicking opponents where they’re most vulnerable, this feud might not end well for Rondo. Green could do a lot more damage to Rondo's balls than just wiping some sweat on them.