Depending on your job requirements, the Patriots either got off to a great or terrible start in Sunday afternoon’s trip to Cincinnati to take on the bungling Bengals.

Fortunately for Bill Belichick’s squad, things leveled out a bit over four quarters against a one-win foe as New England clinched a playoff berth with the 34-13 victory at Paul Brown Stadium.

Tom Brady’s offense marched right down the field for a 7-0 lead on the opening possession, a drive filled with chunk plays on the way to a James White 23-yard score on a well-executed screen play.

Unfortunately for New England, minutes later the Bengals tied the game running the ball down the throat of the Patriots poor-tackling defense on eight straight plays before Andy Dalton found tight end Cethan Carter for an easy 8-yard touchdown.

While New England went three-and-out on its second possession, Cincy drove down the field yet again to a short field goal for the 10-7 lead as the first quarter expired.

The Bengals then gave the Patriots the halftime lead 13-10 thanks to a gift muffed punt that turned into a Folk 46-yard field goal.

Another Bengals turnover to open the second half gave Brady a short field on the way to a 7-yard touchdown throw to N’Keal Harry for the 20-10 lead early in the third quarter.

New England then started to pull away from the Bengals on Stephon Gilmore’s 64-yard pick-six of an Andy Dalton throw for the 27-10 lead midway through the third quarter.

It wasn’t always pretty or easy, especially for the Patriots’ offense, but it was more than good enough to break a two-game losing streak thanks in large part, as has so often been the case, to a playmaking defense that picked off Dalton four times.

Before moving on to next Saturday’s big AFC East battle with the Bills at Gillette Stadium, here are some personnel highs and lows from the Patriots win over the Bengals.

Stephon Gilmore – The Patriots needed some spark in Cincy and Gilmore gave it to the visitors with a pair of interceptions in the third quarter. First, the cornerback recorded his fifth interception of the season – tying a career-high and tying for the NFL lead -- blanketing Tyler Boyd and running the route better the receiver to haul in Andy Dalton’s throw. Brady took advantage and turned the pick into an eventual 7-yard touchdown to N’Keal Harry. A possession later Gilmore stepped in front of Dalton’s throw for Boyd on the sideline and sprinted down the left side for the 64-yard touchdown. Despite some of the grades by those silly analytics websites, Gilmore is arguably the best cornerback in football and inarguably the best defensive player on maybe the NFL’s best defense. He helped key the win in Cincy.
Sony Michel – Aside from a scare on a fumble that he fortuitously recovered, Michel had his most consistently-productive game of the year against the NFL’s worst run defense. The second-year back had 20 combined yards on his first two carries of the day on the opening drive and then kept the production going in the second half with the Patriots holding a two-plus-score lead. Michel ran well and got room to work from the line, finishing the win with 19 carries for 89 yards. The numbers aren’t eye-popping but they were solid for an offense that had a season-high 177 yards rushing before the game-ending kneel-downs.
James White/N’Keal Harry – There wasn’t a ton of efficient production from the Patriots’ passing game in Cincy, but the proven veteran and fledgling rookie made key plays through the air to pave the way to victory. White had the only two completions on the opening scoring drive, a 22-yard catch-and-run down the left side and then a perfectly-blocked screen for a 23-yard touchdown. Harry then hauled in Brady’s other passing touchdown, finding a way to get open on the back line of the end zone for the slow-developing 7-yard score. The plays that got the Patriots into the end zone when the game was still competitive deserve attention for a team that’s struggled to score over the last couple months, especially as the first-round receiver Harry takes baby steps in his progress finding a role on the offense.

Tackling/run defense – The Bengals literally ran the ball down the Patriots throat on their opening drive, eight rushes for 67 yards on the way to the game-tying touchdown. The production included Joe Mixon capitalizing on poor Patriots tackling for a 29-yard highlight run. Mixon was over 100 yards rushing midway through the third quarter on the way to 25 carries for 136 yards on the day. Overall the Patriots allowed the NFL’s 28th-ranked rushing attack to churn out 32 carries for 164 yards (5.1 avg.) as a team. Poor play at the point of attack and poor tackling were at the center of the problem most of the afternoon.
Tom Brady – As has been the case too often this season, Brady struggled in the first half even during a game-opening drive touchdown. His only two completions on that scoring drive were a dump off and screen to James White for the score. Overall Brady, who was under pressure, completed just 10 of 21 throws for 95 yards in the first half in Cincy. He missed a number of open targets throwing high, including missing Mohamed Sanu on a would-be wide-open touchdown late in the second quarter. Brady, who was sacked just twice but once again dealt with his fair share of pressure, finished completing 15 of 29 passes (51.7 percent) for just 128 yards with the pair of touchdowns and no interceptions for the 86.6 rating.
Mohamed Sanu – The veteran receiver arrived in New England prior to the trade deadline, added in exchange for a second-round pick to inject life in the Patriots passing game. That has not happened. Sanu had a fourth-down drop for the second time in three weeks. He and Brady just can’t seem to get on the same page, missing on a would-be touchdown in the second quarter. Sanu had just two catches on seven targets in the first half. Sanu was also fortunate that a fumble on his only target of the second half was wiped out due to three Bengals’ penalties. Things just aren’t coming too easy for Sanu in New England. 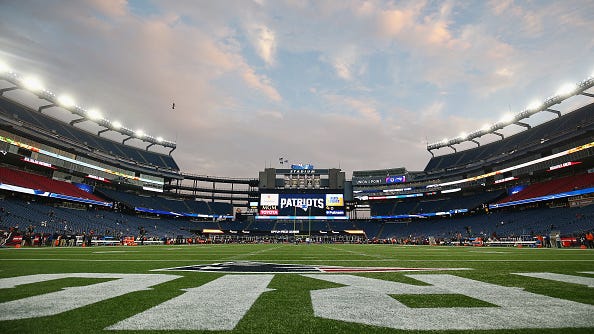