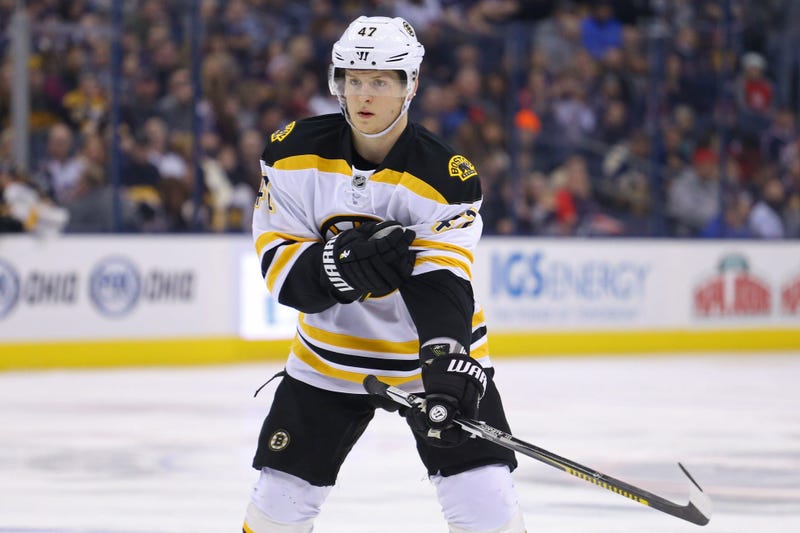 The backend was secure for the Bruins entering free agency. Naturally, the team's most important signing was a defenseman.

When John Moore signed a five-year deal to join the Bruins, speculation ran rampant about the Bruins offloading a defenseman. Management has always been fond of carrying extra blueliners, as experience is necessary when the injury bug strikes. However, the Bruins carry eight NHL defenseman currently. Jakub Zboril is listed on the team's official roster, bringing the number of blueliners to nine. The team also boasts a plethora of borderline big-league ready left-shot defensemen, including Urho Vaakanienan and Jeremy Lauzon.

Unless the black and gold plan on entering the season with four lines of defense or having two members of the group sporting a coat and tie on the ninth floor of the Garden, something has to give.

The Bruins already have a full 23-man roster and a shade under $3 million to play with in cap space, so a trade could be in order. Defensemen are always a valuable commodity, so any of the Bruins talented blueliners will command interest from around the league.

Let's examine who the Bruins could ship out from their current blueline.

As Moore just signed a long-term contract, he will not be going anywhere. It is incredibly unlikely Don Sweeney would agree to trade him right after handing him a contract. Zdeno Chara is the primary minute's eater of the group, burdened with the task of countering the opposition's best forwards night in and night out. The massive Slovakian is also a great leader and one of the toughest in the league to play against. Despite his advanced age, Chara's play has remained steady. The Bruins would be foolish to trade him. Unless the Bruins are offered a king's ransom, it is hard to envision Charlie McAvoy being dealt, either. The Long Island native burst onto the scene his rookie year, dominating puck possession and creating offense with ease. It would be stunning to see the Bruins move on from Moore, Chara, or McAvoy.

Many speculate that the Bruins could trade Torey Krug for a top-six winger. Some feel that the Bruins' blueline is too small and point out Krug's diminutive stature and lack of physical play. However, defensemen that can drive offense and produce 55-plus points do not grow on trees. He excels offensively, finishing ninth among NHL defensemen in points last season. He averaged 0.78 points per contest and has 28 points in 38 career playoff games, good for 0.74 points per game. His clutch blast from the point in the third period tied game seven against the Maple Leafs in the first round of the 2018 playoffs, cementing himself as a quality postseason performer.
Bill Comeau

Above is the SKATR comparison tool, created by Bill Comeau, as a way of comparing two players. The data used is from 2016-18. On the right is Torey Krug and the left Charlie McAvoy. Both are sheltered by a very high percentage of offensive zone starts and boast incredible possession numbers, dominating Corsi, expected goals for, and shot rates. Krug shoots a lot more than McAvoy, who prefers to set up his teammates. Krug also plays against weaker competition and with less-skilled teammates, which helps to showcase his offensive instincts and ability to move the puck well.

Krug is compared to McAvoy to illustrate the tandem's elite offensive capabilities. The Bruins are lucky to boast two of the league's premier offensive defensemen. These two open up the ice, creating time and space for teammates by commanding the opposition's attention with strong skating, puck handling, and distributing ability. He would command a sizeable return for the Bruins, yet his presence on the blueline elevates those around him and helps the forwards in front of him to generate shots and maintain possession. Krug has two years left on his current deal, which includes a modified no-trade clause, before becoming an unrestricted free agent.

Matt Grzelcyk also re-upped with the team this offseason, inking a two-year deal worth a total of $2.8 million. The Boston University product jumped into the top six, proving to be a viable puck-moving defenseman. Playing with mostly burly, defensive-minded players like Adam McQuaid and Kevan Miller, Grzelcyk executed breakouts with his strong passing ability and vision. His cap hit is low, but minutes might dry up with the addition of John Moore. Grzelcyk fits Bruce Cassidy's mold for having defensmen that are capable distributors, but Moore's strong skating ability and large frame are also ideal for the system that the Bruins want to implement. He could intrigue general managers of teams who could use his skating and offensive upside in a larger role.

Kevan Miller and Adam McQuaid are interesting cases, as they fit the same mold as players. Both are well respected within the locker rooms and viewed as leaders of the team. They punish opponents with bone-crushing body checks and are not afraid to let the fists fly if someone takes a run at a teammate. They both fill third line pairing, right-handed shot roles and can effectively kill penalties. McQuaid is an unrestricted free agent next July, while Miller is signed for two more seasons with a $2.5 million cap hit. The two essentially fulfill the same niche, which could ultimately make one expendable if the Bruins find a need to fill elsewhere.

Brandon Carlo is an interesting case. His rookie deal expires after this season, leaving the young defenseman as a restricted free agent. Carlo has improved drastically on defense, starting the majority of his shifts in the defensive zone and containing highly skilled opposing forwards. Still just 21 years of age, Carlo could be a strong fit as a shutdown defenseman for years to come. However, the broken ankle sustained in the playoffs could hinder his value. Pending a strong recovery, Carlo could be sold at a minuscule price if traded this summer.

If the Bruins aim to allay the overabundance of defenseman with NHL experience, a trade is necessary. The Bruins have a full roster and a touch under $3 million in cap space remaining. Each defenseman has a role carved out for the team on the team. As the Bruins tinker with and finalize their roster, the team could liberate minutes on the backend by acquiring a proven forward or future assets.