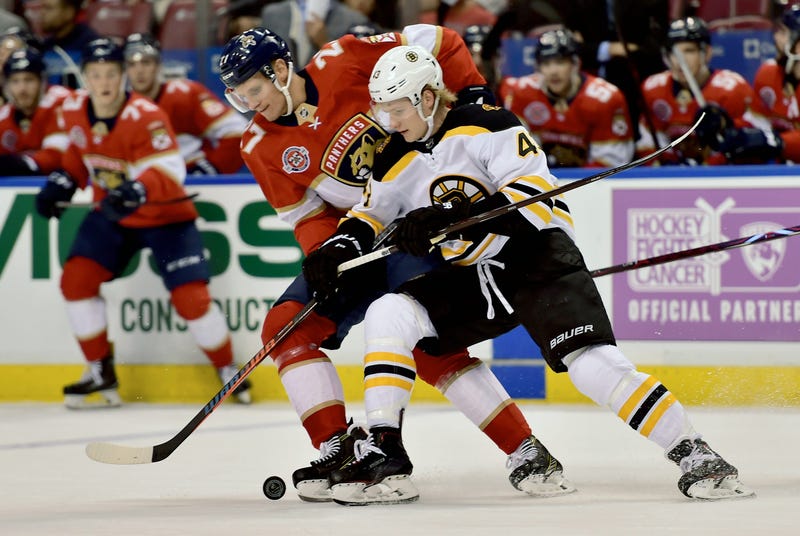 The Bruins’ offense is so beyond repair right now that even coach Bruce Cassidy’s emergency decision to stick center David Krejci between Brad Marchand and David Pastrnak in the second period against the Florida Panthers on Tuesday couldn’t stop Boston from being shut out for the fifth time this season.

The Bruins were shut out just three times all of last season, including playoffs.

You know how many shutouts the Panthers had before Tuesday? None. You know where the Panthers ranked in goals allowed per game before Tuesday? 29th with 3.56! What was Roberto Luongo’s goals-against average and save percentage before he had the pleasure of facing the Bruins? 3.07, .902.

This performance in a 5-0 loss came on the heels of losing 4-2 to Detroit, a team ranked in the bottom half of the NHL in goals allowed, Saturday.

The Bruins, who have scored 14 goals in their past nine games, are turning poor defensive teams into the ‘90s New Jersey Devils easier than Penn & Teller can make a volunteer disappear.

But beyond the Bruins’ top two wings no one else was really heard from at the offensive side. And after being perfect and covering up for several Boston giveaways in the first period, goaltender Jaroslav Halak couldn’t withstand the Panthers’ attack, especially their first line. Mike Hoffman scored two goals, Jonathan Huberdeau added one.

But goaltenders, especially ones that rank second in the league in save percentage, are permitted to have an off night. There’s no telling how much the stress of playing behind a pop-gun offense puts on a goaltender, knowing that if he gives up more than two goals he’s going to lose.

Cassidy said after the game on NESN that the only answer for the Bruins is to “get back to work” on rebounding in Tampa Bay on Thursday. This effort (or lack thereof) probably requires more than just the same 18 skaters getting back at it with a spring in their steps. It probably requires more lineup changes because there were guys on the ice that just didn’t look prepared to play a NHL game.

At least 2/3 of the Bruins forwards can't be trusted to do anything with the puck. With Krejci on the top line the Bruins suddenly had Colby Cave, a depth player who’s in over his head as a top-six center, between Ryan Donato and Jake DeBrusk. That rendered those two young wings useless. Donato compounded his quiet night at the offensive end with a defensive lapse that proved waving your stick at someone in the NHL won’t slow them down, and Panthers defenseman Mike Matheson was able to stick a dagger in the Bruins with an end-to-end goal that made the score 2-0.

Mike Matheson fires a shot past Halak after going coast to coasthttps://t.co/3kaUerR0cU

Danton Heinen hasn’t produced, so he’s been demoted to the third line. But he’s never going to find his offense there skating alongside Joakim Nordstrom and Noel Acciari. Heinen’s not the type of player that can create his own offense.

At the risk of letting the fourth line off the hook, they played 10 minutes and created more chances than the second and third lines combined (which isn’t saying much). Of course, in a blowout game, one would usually like a fourth line to clobber someone either with a hit or a fist. But these are kinder, gentler days in the NHL.

The only hit of note from the Bruins was defenseman Connor Clifton awkwardly butt checking Panthers forward Nick Bjugstad, who had to leave the game for a concussion check. The NHL Department of Player Safety should be giving Clifton a call because the rookie left his feet, hit Bjugstad up high and the score was 4-0 (just an unnecessary hit).

Instead of cheap shots the Bruins needed more shots on net. They need a spark up front and if it’s not going to come from the 12 guys that suited up Tuesday, they’ll have to consider other options. Anders Bjork had a strong weekend in Providence and Ryan Fitzgerald has been productive down there all season. Jakob Forsbacka Karlsson is on this trip with Boston, and although he’s looked lost more than he’s looked engaged so far in the NHL this season, maybe it’s time to throw him between Marchand and Pastrnak again and tell him that if he can’t produce with two of the best forwards in the NHL he’s going to spend the rest of the year in Providence.

It's not early in the season anymore and the Bruins are in danger of waiting too long for some of the slumping forwards to break out. Until general manager Don Sweeney can swing a trade or two it's time to open up the Boston-Providence pipeline some more.