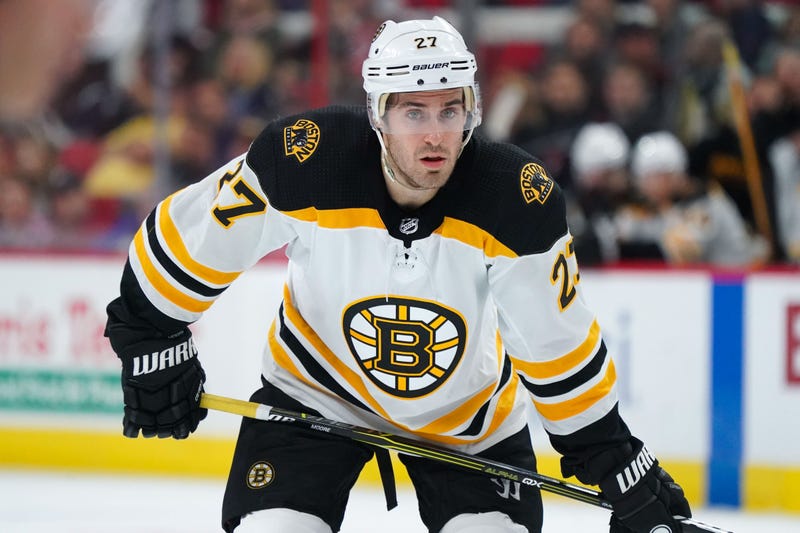 John Moore’s three season with the New Jersey Devils helped him earn a five-year contract with the Bruins last July 1 as an unrestricted free agent.

He’ll always be thankful for the opportunity he received in the Garden State.

“You know I’m incredibly grateful for [general manager] Ray [Shero] and [coach] John Hynes,” Moore recently told WEEI.com. “They really took me and molded my game and took me to another level, showed me how to be a pro and gave me a lot of responsibility and I’m very grateful for that. Not only for me but for my family and I have nothing about good things to say about it.”

His stint with New Jersey was the first time in his NHL career he stayed in the same place for three consecutive full seasons. He not only became an important teammate and a vital member of the defense corps, averaging nearly 20 minutes of ice time a night, he and his wife Elizabeth became active members of their community in and around Hoboken.

“I think that’s more my wife. But that was one of the biggest surprises I guess playing in New Jersey, it’s really kind of a small-knit community,” Moore said. “Anything we could do to help with schools or hospitals, we would do. But that’s my wife, who is really the driving force.”

John and Elizabeth purchased presents for the Devils’ annual Day of Giving for underprivileged kids in Newark. John participated in the Devils’ annual hospital visits and Elizabeth participated in a long list of wives’ events, including the yearly toy, food and coat drives and the sale of merchandise to raise money on Hockey Fights Cancer and Pride Night’s at Prudential Center.

That’s why when Shero was asked recently by the New Jersey media about the struggling Devils missing Moore’s presence, the GM gave an answer that included Moore’s off-ice contributions.

“He was a huge part of what we built, him and Elizabeth both were fantastic, caring,” Shero said. “He came here and signed a three-year contract and then he got a five-year contract. You know what? If that’s how things work, that’s fantastic.”

John and Elizabeth have continued their off-ice contributions since coming to Boston, although they have a toddler to occupy a lot of their time and a second child on the way. On the ice, the Devils’ loss has been the Bruins’ gain. Moore quickly got comfortable with the Bruins’ system and was instrumental in them surviving when Zdeno Chara, Brandon Carlo and Charlie McAvoy were out with injuries (although Moore missed a couple games as well). He was averaging almost 21 minutes a game before McAvoy’s return and was a key part of the Bruins’ penalty kill.

Since McAvoy’s return Moore’s down to 18:39 of ice time per game playing on the third pair and killing penalties. And coach Bruce Cassidy just wants Moore to better recover after he makes a mistake.

“I think the last few games he hasn’t been as steady as the start of the year. So part of that is, I think with John, I think sometimes if he makes a mistake or it doesn’t go his way, then he’ll try to correct it all at once,” Cassidy said. “So he’s had a tendency recently to chase the game a little bit and he just needs to relax and just play. … I think he was having an easier time before, earlier in the year, just letting the game come to him and sometimes there’s different reasons for that.”

Moore, who has 1-4-5 totals in 34 games, take every bit of advice Cassidy gives him and tries to put it to use. He has lately been seen getting extra post-practice tutelage from his coach. And Moore studies video, not just of himself but other defensemen around the league.

“Well I think for me I want to focus on being solid defensively and really ending plays,” said Moore, who noted that Marc-Edouard Vlasic of San Jose is one of the models for doing this. “And that’s been a focus of mine in watching video and really trying to grow my game. Just having a better stick and making plays and being harder to play against.”

The Devils tried to retain Moore but were outbid by the Bruins. Free agency is “a different beast,” Moore said, and he wasn’t comfortable with the situation. But he’s loving playing with the Bruins and rubbing shoulders with the likes of Chara and Patrice Bergeron every day.

He’s been traded twice and the Bruins are his fifth NHL organization, so facing old teams is old hat for him. The New Jersey game won’t be any different once he gets on the ice.

“I’m here, it’s a business, I’m here to take two points,” Moore said. “So after the game I’m sure I might catch up with the some of those guys but it’s business for me.”

sports
Watch: Jeff McNeil gets into bizarre, heated exchange with Joe West
news
Young people most likely to believe misinformation about the pandemic: Study
news
Study finds Hawaii, New Jersey among the happiest states in the US: Full list
news
Pregnant woman fights off shark attacking her husband after seeing 'blood filling the water'
music
Rosario Dawson opens up about moving in with boyfriend Sen. Cory Booker: 'I'm a Jersey girl now'
news
50% of U.S. adults who lost jobs due to COVID were still unemployed in August: Study