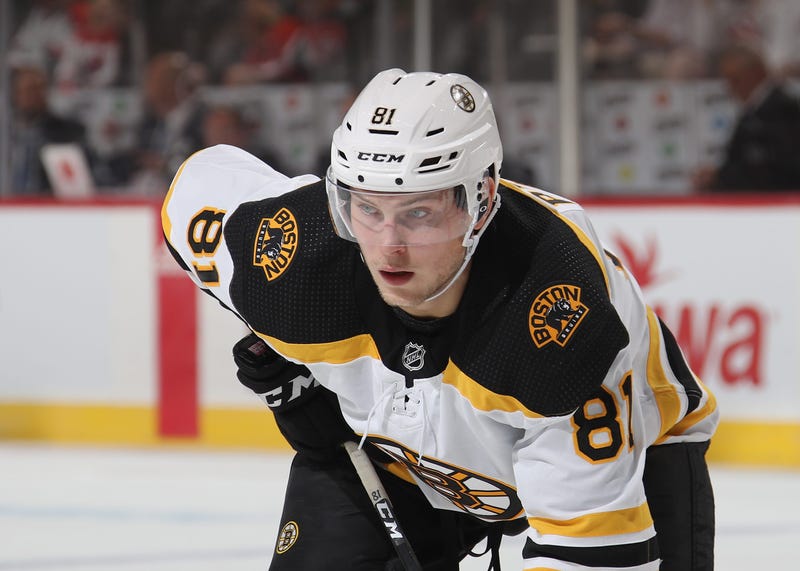 Things were getting stale with the Bruins and everyone could see it, particularly in their 4-3 loss at Pittsburgh on Sunday.

Evidently blowing a 3-0 lead to the Penguins pushed general manager Don Sweeney and coach Bruce Cassidy to shake things up. That’s why defenseman Jeremy Lauzon was called up from Providence of the American Hockey League and replaced John Moore in the lineup, and why wing Anton Blidh was activated from the injured list to replace Joakim Nordstrom in the lineup for the game against Vegas on Tuesday.

The moves worked as both players contributed in the Bruins' 3-2 win. The new faces didn’t just play their roles well – Lauzon scored a goal and played sounds defense, Blidh forechecked well and at one point was in Vegas goalie Marc-Andre Fleury’s face where he belongs – they also lit a fire under some guys that might have been getting comfortable the past couple months that Brett Ritchie, David Backes and Steven Kampfer were hardly threatening anyone’s job.

“I’ll be very open … we decided a couple of weeks ago or whatever it was that we needed a little more internal competition,” Cassidy said after the win against the Golden Knights. “Usually, that starts from the bottom up. We identified some guys in Providence that were playing well. [Blidh> was one of that was hurt at the start of the year that we were going to look at in training camp.”

Lauzon, forward Karson Kuhlman and goalie Dan Vladar were assigned to Providence on Wednesday so they can continue to play during the Bruins’ nine-day break that doesn’t end until a game at Winnipeg on Jan. 31. Blidh, who would require waivers to be assigned to Providence, remained with the big club and now gets more than a week off after missing this entire season except for four AHL games and now one NHL game.

Barring a trade made by Sweeney during the break, there’s no reason why Cassidy’s lineup against the Jets in Boston’s return game shouldn’t be identical to the one that took down Vegas. Maybe Cassidy wants to keep Nordstrom sharp, but that should mean a switch to right wing in place of inconsistent veteran Chris Wagner instead of the removal of Blidh. If Cassidy wasn’t pleased with Matt Grzelcyk’s uneven performance against the Golden Knights, Moore should get back in but not at the expense of Lauzon’s playing time.

This is the time of year when contending teams like the Bruins are deciding not just what they want to trade for before the Feb. 24 NHL trade deadline, but also what they have internally that can help and who’s better off getting traded. The sellers out there are looking closer at which prospects might help them sooner rather than later.

Lauzon and Blidh should be showcased for both Boston and the masses. They should be given some rope to show what they can do now that they’re in their third and fifth North American professional seasons, respectively. If they go haywire, Zach Senyshyn and Trent Frederic should get the chance to come up at forward, Jakub Zboril and Urho Vaakanainen could get a run on defense. There’s nothing wrong with shuffling these players in and out if it doesn’t inspire the likes of Moore, Grzelcyk, Nordstrom and Wagner to pick up their games and regain their regular roles in the lineup. The Stanley Cup Final hangover is mental as well as physical – the Bruins have acknowledged as such – and part of that is players feeling entitled to their job.

In describing Lauzon’s goal Tuesday, Cassidy said “ … did it in the right way, didn’t overthink it. Just got it, got off the wall, make sure you pound it hard so it gets by the first layer. If it gets blocked closer to the net, at least it’s not going to be a quick transition. We’ve been trying to instill that attitude in some of our other guys.”

Cassidy might as well have been talking about all his players (with a few exceptions) and all areas of their games. He needs them to be smarter and stronger with the puck and wiser without it. Lauzon and Blidh set an example Tuesday and should be given a chance to do it again when Boston’s season resumes.