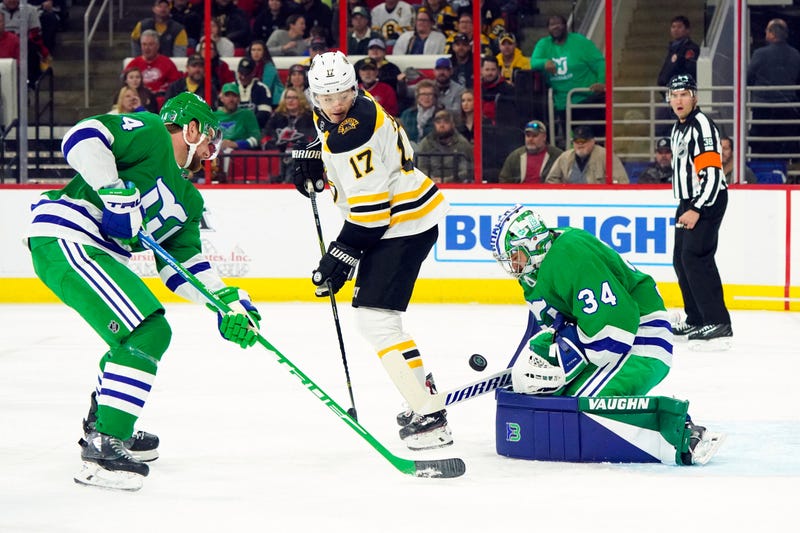 Green and red are the colors of the season and there was plenty of both during the Bruins’ 5-3 loss (after they led 2-0) at Carolina on Sunday.

The Hurricanes decided to “honor their heritage” and wear green Hartford Whalers uniforms. I’m sure the people of Hartford were really honored. More likely they felt like they were watching their ex enjoy life without them on a national stage.

The all-green outfits didn’t make you feel nostalgic, they made you feel like you were watching the Bruins play against an AHL or college team. The only green that mattered was however many more dollars the Hurricanes made by selling some extra sweaters while continuing to fail to match the average attendance the Whalers used to get at The Mall.

Defenseman Charlie McAvoy’s face should be red with embarrassment and anger after one of his toughest outings of the season. We all know plus/minus is an outdated stat that’s not an accurate reflection of how one plays, except on nights like the one McAvoy experienced. He was minus-4, two of his giveaways led directly to Hurricanes goals, and a third went off McAvoy’s right hand. He’s played a lot of minutes, and a lot of hard minutes, since returning from injury Dec. 6 and it was bound to catch up to him at some point. Three days rest will do McAvoy, as well as the rest of the Bruins well.

Ryan Donato is in the Bruins’ lineup to do one thing: score. He did it twice against the Hurricanes. One of his goal was a fortunate bounce off defenseman Trevor van Riemsdyk but his second goal was the type of snipe the Bruins expect from him. Of course, he’s still a little green when it comes to playing without the puck and winning battles, so we’ll see how long the Bruins can continue to roll him over the boards in hopes he’ll outscore his deficiencies. His needless icing in the second period led to Justin Faulk scoring the 4-2 Carolina goal after the ensuing faceoff and might've left coach Bruce Cassidy's face red.

The lamp behind Tuukka Rask went red five times. A couple were odd-man rushes no one could blame on the goalie. But he had one bad exchange with McAvoy that led to the goal off McAvoy’s hand. And then he basically gave the Hurricanes their second shorthanded goal of the night by leaving the puck in the crease for Sebastian Aho before Teuvo Teravainen scored on the rebound. Rask hadn’t played in a week and one has to worry that the rust got to him, especially with no games for three days.

It took Cassidy until five minutes into the second period to stop experimenting with his top six forwards and put David Pastrnak back together with Brad Marchand and Patrice Bergeron. It almost instantly paid off, but Carolina goaltender Petr Mrazek made a point-blank save on Pastrnak. And the coach’s line juggling didn’t pay off the rest of the night. Danton Heinen settled in next to David Krejci and Joakim Nordstom after there were some other permutations.

For all but one shift during Cassidy’s line juggling, the fourth line of Sean Kuraly, Noel Acciari and Chris Wagner stuck together and continued to be effective in the offensive zone. They were finally rewarded, sort of, when Kuraly set up Steven Kampfer’s goal that gave Boston a 2-0 lead.

The fourth line was on the ice for the first Carolina goal, but had a strong game.