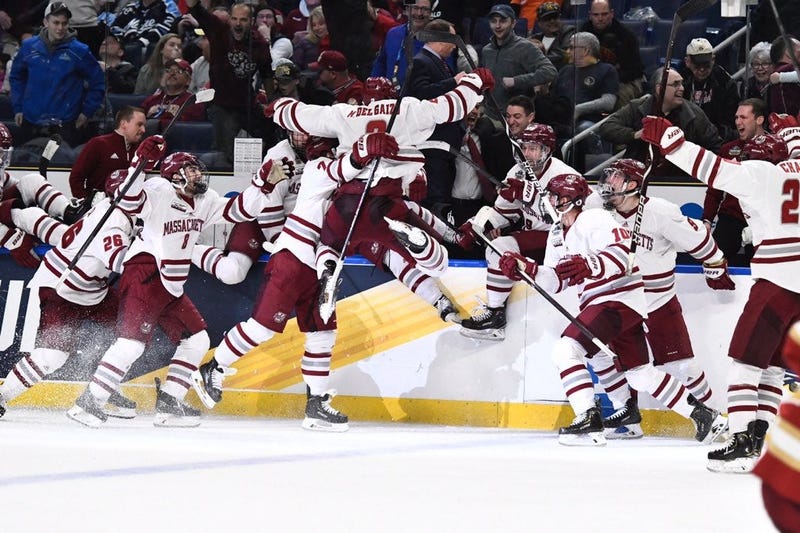 The remarkable journey for the UMass Minutemen took its next step with a 4-3 overtime win over the Denver Pioneers in the Frozen Four Thursday night.

UMass blew a 3-1 third-period lead and appeared to lose any and all momentum heading into the overtime period. They went much of the overtime without much in the way of scoring chances, but then at the 15:18 mark freshman defenseman Marc Del Gaizo sent a rocket past Larsson to end it and send the Minutemen to Saturday night's national championship game, where they'll face defending champion Minnesota-Duluth.

The game didn't get off to a promising start for UMass, as captain Niko Hildenbrand was given a five-minute major penalty for a hit to the head and was ejected, giving Denver a huge opportunity to get on the board first. Early on in the power play, after a crazy sequence of chances and saves, Denver’s Kohen Olischefski converted on a rebound to put the Pioneers ahead.

Late in the man advantage for Denver, Jarid Lukosevicius took a penalty of his own to make it a 4-on-4 for 37 seconds. It then became a 4-on-3 when Tyson McLellan went off to the box for Denver as well. UMass wasted no time converting with all of that extra space on the ice, as Bobby Trivigno tipped a one-timer past Filip Larsson and in.

The penalties did not stop for Denver as Ryan Barrow destroyed an unsuspecting Del Gaizo with a headshot. That hit resulted in the second ejection of the game, and this time a five-minute power play for UMass with 44 seconds of 5-on-3 time.

Some excellent puck movement by the Minutemen led to a wide-open chance for Mitchell Chaffee and he made no mistake, giving the Minutemen a 2-1 lead. That wasn’t all. John Leonard got in on the fun with a snipe to give UMass a two-goal lead with ample time left on their power play. Three straight goals in 1:41.

UMass’ conversion on Denver’s mistakes gave them the momentum heading into the second period. The Pioneers were in trouble at this point.

The second period didn’t feature a lot of shots. It was more so a lot of UMass defending its lead and stifling Denver’s comeback bid. Things didn’t get easier when Michael Davies took a slashing penalty with 8:30 left. Chaffee nearly made it 4-1 on the power play, but skied it over the net.

Chaffee then threw a huge hit on Denver's Ian Mitchell that wound up being called yet another major penalty and an ejection, giving Denver another five-minute power play. Unfortunately for the Pioneers, they didn’t score before the end of the period, but still had 1:12 to go in their man advantage to start the third. Filip Lindberg was standing on his head for the Minutemen.

A couple of power plays in the first half of the third period came Denver’s way but they couldn’t convert until Cole Guttman gave them some life with just under 10 minutes to go. 3-2 UMass. The period as a whole was a battle.

Denver’s persistence paid off with 3:46 left as Guttman was the hero again with his second of the game to tie it at three. The clock bled out into overtime, setting the stage for Del Gaizo's heroics.

In their first-ever trip to the Frozen Four, the Minutement are now one win away from their first national title.

The first of two highly anticipated Frozen Four matchups came in the form of Providence College vs. the University of Minnesota Duluth. Providence was looking to return to the national championship game for the first time since winning it all in 2015, but fell to the defending national champions, 4-1, in a game that was closer than the final score indicated (the Bulldogs scored two late empty-netters).

For a good portion of the beginning of the game, both teams were involved in more of a feeling out process. Around the halfway point of the first period, a Duluth goal went under review after Billy Exell potted a net-front chance, but the whistle blew before the puck crossed the goal line.

Despite no score, Duluth certainly had the advantage when it came to physical play and offensive zone time, landing multiple big hits and pushing the pace. The Friars were having a tough time, but didn’t let themselves fall into a hole on the score sheet.

The Bulldogs appeared to break through again with 3:20 left in the first period when Cole Koepke buried a rebound. But once again a review followed, this time for goaltender interference, resulting in a second goal being called off for the Bulldogs. The shots were even at eight, and so was the score after a hectic first period.

The third time really was the charm for UMD, as Justin Richards got the ever so important first goal for the Bulldogs with 13:21 to go in the second period. A power play opportunity came Providence’s way with 8:54 remaining, a potential blessing. Eleven seconds in, the Friars cashed in as Josh Wilkins deposited a Brandon Duhaime feed into the back of the net. Duluth’s lead didn’t last long.

The Bulldogs got their shot at redemption with a power play of their own around four and a half minutes later. Some good chances came in the later portion of the man advantage, but no dice. At the end of the second, things were pretty even overall, like the first. Both goaltenders were steady in their respective creases. The Friars did a solid job of taking a share of the momentum back, setting up for a great third period.

Providence got the first man advantage of the third period 3:44 into the frame. Shortly after came another Bulldogs penalty, giving the Friars a 5-on-3. Unfortunately for the Friars, they weren't able to capitalize. Then Exell got back his goal that had been taken away and put the Bulldogs ahead 2-1 with just under 10 minutes to go.

After a back and forth battle, the Bulldogs' two empty netters in the final minute sealed the deal.