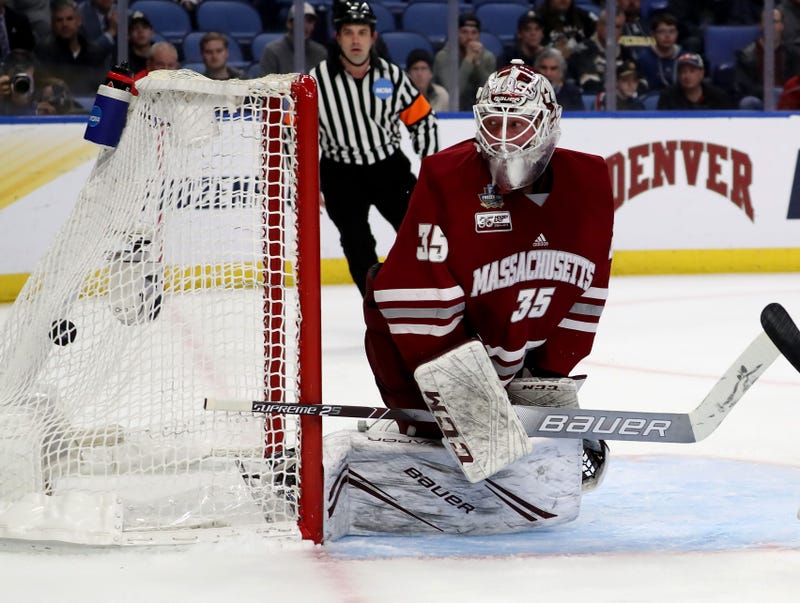 UMass' magical season ended in disappointing fashion, as the Minutemen fell to Minnesota-Duluth 3-0 in Saturday night's national championship game in Buffalo. The Minutemen had won their first Hockey East regular-season title and reached their first Frozen Four this season, but ultimately the Bulldogs were too much as they captured their second straight national title.

A Marc Del Gaizo penalty just over two and a half minutes in gave the Bulldogs the first opportunity to strike -- and they took full advantage as Parker Mackay made no mistake on the backhand in close. UMD was in control early, registering nine of the game's first 11 shots on goal.

UMass got a power play of their own with 7:31 left in the first. With how badly they were getting outplayed to this point, a power play was much needed. They did not convert on the power play, but their increased energy as a result of the man advantage was apparent as they generated some solid chances during and after the fact. Most notably, Cale Makar -- fresh off winning the Hobey Baker Award Friday night -- came extremely close to scoring on a wraparound.

The second period was more of Duluth having a stranglehold on the game. The Minutemen could hardly muster any offensive chances and found themselves trailing 23-9 in the shots department late in the second period.

Then Mikey Anderson widened the Duluth lead to two with a well-placed shot past Filip Lindberg late in the period.

Eventually, things got even worse for UMass when Makar went to the box with 18.2 seconds left after laying Cole Koepke out -- making it so UMass would start the third period on the penalty kill. It was all Bulldogs through 40 minutes.

A potential saving grace came for UMass in the form of a power play with 13:13 left -- but no dice. The Bulldogs continued to play sound hockey and in doing so limited a high-octane UMass team.

The Bulldogs sealed it late with an empty netter, giving them a three-goal lead and back-to-back national championships. They become the first team to win back-to-back titles since Denver in 2004 and 2005.

It was a tough end for the Minutemen, but that shouldn’t diminish an excellent, revolutionary season for the program.