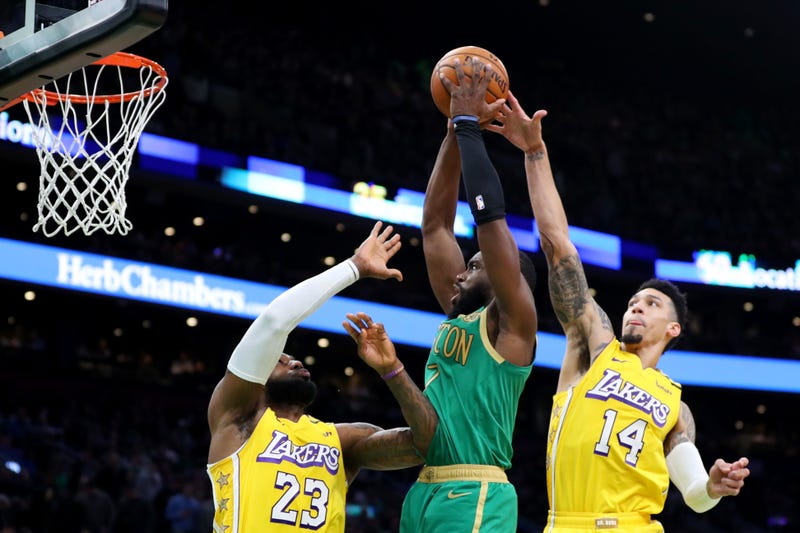 Things did not look good for the Celtics in the first couple minutes of Monday’s game. If it wasn’t for Gordon Hayward’s deep 3-pointer, followed by his and-1 soon after, the Lakers might’ve maintained their momentum.

But Hayward stepped up when no one else could. It was almost as if everything that’s happened with him recently was nothing more than a bad dream.

At least in terms of his scoring, Hayward’s play was at it’s loudest in the first, when he scored eight points on 3-for-6 shooting. He still finished in double figures (16) and was efficient (6-for-12), but his greatest contributions came early on.

Because, after Hayward responded to Los Angeles’ haymakers, four other guys took over. And they did not stop until the Lakers waved the white flag with over eight minutes left in the final quarter, en route to a 139-107 win. (For a complete recap of the Celtics' win, click here.)

“It was just a good, old-fashioned butt-whooping,” LeBron James said.

Imagine that. A James-led team came into Boston as 2.5-point favorites and got beat by 32.

And then there’s the matter of the punctuation mark on Monday’s shellacking: Jaylen Brown putting the almighty King on a poster.

“I ain’t going to lie, though: it was pretty nice,” Brown said of his big moment. “It was pretty awesome.”

Brown’s dunk encapsulated how things worked out on Monday: the Lakers weren’t ready for the Celtics, and Boston made sure to bring the heat.

And it wasn’t just that the Celtics won decisively. Brown and Kemba Walker played very well, and Hayward bounced back, but there were two other Celtics who stood out a little more: Enes Kanter and Jayson Tatum.

“I think we just had a very, very tough stretch before this game — obviously, we lost three in a row. I think we learned from our mistakes,” Kanter said. “We knew it was going to be a crazy game tonight. Obviously a long rivalry (with the) Lakers. But I think we just came out with the right mindset and we just did our job.”

As much as Tatum led the Celtics in scoring (27) — finishing 10-for-18 from the floor (5-for-8 from 3-point territory) after a 1-for-4 start (0-for-1 from three) in the first quarter — Kanter’s performance was the most surprising of the night.

With either Tatum or Semi Ojeleye — who also performed well in his role — usually serving as Boston’s four, Kanter, as well as Daniel Theis, was faced with a tough task on the glass with the likes of James, Anthony Davis, JaVale McGee and Dwight Howard crashing. Yet, the Celtics backup center led all players in rebounding (11). Plus, he scored 18 points on 8-for-10 shooting (2-for-4 at the free-throw line).

“Enes showed, he’s not the biggest guy, he doesn’t jump the highest, but he’s in the right spot,” Ojeleye told WEEI.com. “He’s fighting for position. So it’s just a grit thing.”

Kanter also wasn’t caught in no man’s land on defense or getting bullied down low. For the longest time, it’s felt like Kanter wasn’t part of the solution, but his performance on Monday — combined with other recent ones — indicates otherwise.

But Kanter can’t be the one who carries the Celtics to the promised land. That’s on Walker, Brown, and, perhaps most of all, Tatum.

The third-year wing is a slow starter. There’s no debating that. But Tatum’s early-game struggles don’t usually impact him late. His shooting — both mid-range and from 3-point territory — can help Boston’s offense gain traction when they face a team like the Lakers who have a lot of size.

Most importantly, once again, Tatum has shown he can take charge in the big games — no matter how many so-so performances he churns out against subpar teams.

Ultimately, when you look at what each of the aforementioned players did on Monday, along with Marcus Smart, Kanter actually summed up exactly why the Celtics took control of the game: “...we just did our job.”

Now they need to do so more consistently.