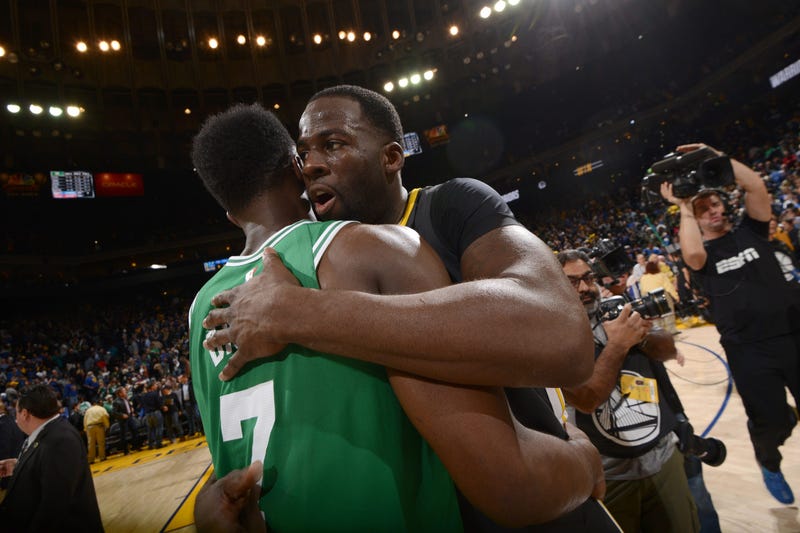 The 2020 NBA free agent class isn’t expected to be anything special. Denver extended Jamal Murray (five years, $170 million) this offseason, taking one of the few prominent names off the board. The 76ers gave Ben Simmons the same max deal — which seems like money well spent and in no way a mistake.

Another big name came off the board on Saturday when the Warriors extended Draymond Green’s contract by four years. His deal, which includes 2019-20, is now worth $118 million.

Why should Celtics fans care about this? Well, Jaylen Brown becomes a restricted free agent next summer and this could impact his market.

Boston will almost certainly extend him a qualifying offer, thus making him a restricted free agent, and it’s just as likely Brown will see who else is interested in his services, earning himself a bigger payout in the process. The C’s then have the option to match whatever offer he’s given.

So the Celtics ultimately hold the power in the end, but another team could drive the price tag up significantly. In particular, a franchise on the rise though not quite at contender level — to the point where they likely couldn’t land a superstar in the loaded 2021 free agent class.

Ja Morant, Jaren Jackson and Jaylen Brown sounds like a strong trio built for the future if Morant lives up to the hype and Jackson builds off his rookie season in Memphis.

Portland has Damian Lillard and C.J. McCollum locked up for a while. Somehow, they’ll still have a decent amount of cap space in 2020. Then there’s Jusuf Nurkic. If Nassir Little pans out and they went after Brown, the Blazers would have a deep group of wings with Lillard and Nurkic as bookends.

The point is, as much as the Celtics only have to match whatever price is thrown Brown’s way, there are some who could show serious interest in the wing. Maybe more interest than the C’s initially expected.

But Brown is three years younger than all of the aforementioned RFA’s and even younger than the veterans. Brandon Ingram (RFA) will be out there, too. But Ingram hasn’t exactly played in a winning environment before.

Boston could extend Brown now. However, there’s a worthwhile gamble to be made on both sides. If he plays well in 2019-20, Brown will garner more money. If he doesn’t, the Celtics and other teams may not have to offer him as much. The only issue with that: it seems odd to gamble on a situation where you’d benefit from one of your own players underperforming.