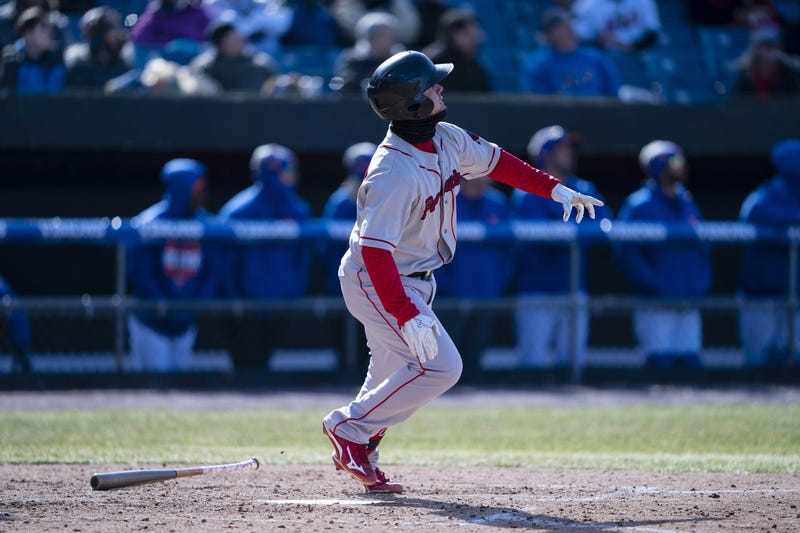 Michael Chavis made some noise at the plate over the weekend, ending his six-game hitless streak where he went 0-for-19. The Red Sox infield prospect had a pair of multi-hit games, going 3-for-4 on Saturday and 2-for-4 on Sunday against the Syracuse Mets. Chavis also homered in each game and had a double in his Saturday performance.

While he’s focused on having the “same, consistent swing,” Chavis has been successful offensively at every level. He even went 6-for-22 (.273) with four home runs and 10 RBI at big league spring training this season.

His biggest obstacle is on the defensive end. Chavis was drafted as a shortstop, then moved over to third base and now calls second his home, while spending time at first base on occasion, as well.

With Bobby Dalbec emerging as a legitimate option at third base and Rafael Devers in front of both prospects for the foreseeable future, Chavis’ best shot at the big leagues seems to be at second — especially with time not being on Dustin Pedroia’s side, along with his left knee. Chavis isn’t certain what the organization has planned for him long-term, but he wouldn’t mind calling second base his permanent home; primarily because of one distinct difference between third and the middle infield.

“I was drafted as a shortstop, so I always liked the idea of me playing the ball, which you do more up the middle,” Chavis told WEEi.com. “At third base, it’s kind of more reactionary with how the ball hits off the bat and stuff like that. So I like being able to play the ball, charge the ball and let myself have some movement towards it; I like that a lot.”

As much as he likes the move, second base is still foreign to the 23-year-old. Chavis practiced at second prior to 2019, but this is the first season he’s played the position in a game.

“The game reps are obviously a lot different,” Chavis said. “The biggest thing is being on the opposite side of the infield and turning double plays. It’s the first time I’ve had to field a ball working towards my right, instead of working to my left towards first base. Trying to turn a double play to second base I have to work that way, which was one of the biggest differences.”

In his four games at second for Pawtucket, Chavis has had 18 defensive chances. He is yet to commit an error and has helped turn three double plays — a strong start, but there’s a lot of season left. Chavis has to prove he can do this on a daily basis for a long stretch before he sees any work at the Major League-level.

A look at bullpen options

The Red Sox bullpen has been overworked to start 2019. Brian Johnson has already hit the injured list, leaving the staff without one of their two long reliever options — a much-needed asset at this juncture with Boston starters only working through the sixth inning in five of its first 16 starts.

Jenrry Mejia continues to work as Pawtucket’s closer, converting three of his four save opportunities with a 1.42 ERA. More importantly, he has yet to walk a batter through 6 1/3 innings of work, striking out six in the process.

Bobby Poyner has bounced back after struggling in his first two appearances for the PawSox. He has tossed a scoreless inning in back-to-back games, though he walked three hitters between the two outings.

Travis Lakins has been hit-or-miss to start 2019. He’s had two scoreless outings in Pawtucket, and two where he’s surrendered a run in an inning of work. However, one sign that things will improve: he has eight K’s and only one walk over five innings.

Darwinzon Hernandez has still only made one start for Double-A Portland, where he punched out 10 and walked four over five scoreless innings. Durbin Feltman has taken a step forward after scuffing in his first outing of the season. The righty hasn’t allowed anyone to reach first base in back-to-back appearances.

Boston certainly has a few options to pick from if someone breaks down.