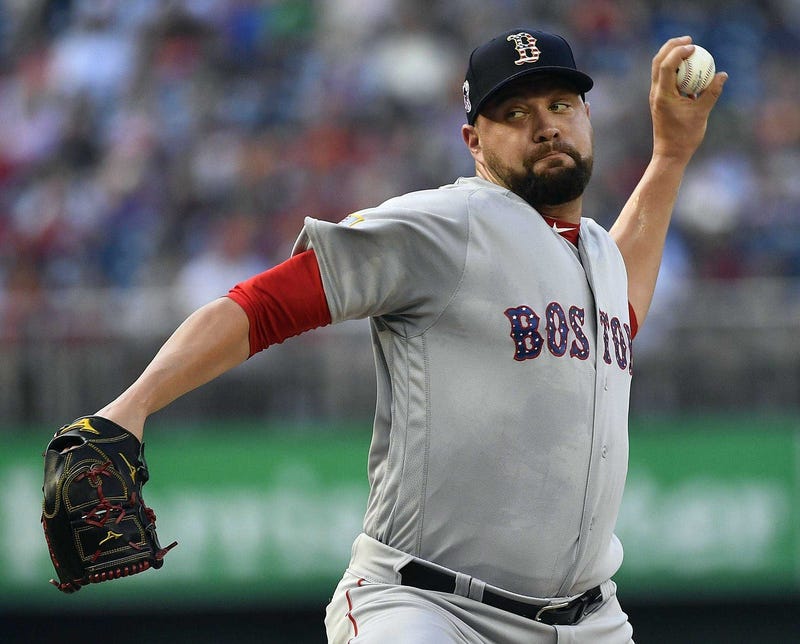 WASHINGTON, D.C. -- Moments after Brian Johnson's ninth big league start -- a 4 2/3-inning, two-run outing that led to the Red Sox' 11-4 win over the Nationals Tuesday night -- the pitcher admitted something.

When he first came up to the big leagues, he wasn't sure that fastball of his was going to play.

"I'm not worried about it anymore," Johnson said. "I feel comfortable."

He has good reason for the security. If there is one thing to take away from these two Red Sox wins against the Nationals it is the reminder of how throwing hard just isn't what it used to be.

The first example came Monday night when Rick Porcello -- a pitcher who said he had never made contact with anything in the mid 90's -- turned on a 96 mph fastball from Max Scherzer for a three-run double. Later in the contest, Bryce Harper hit a 98 mph fastball from Joe Kelly 439 feet.

The moments paved the way for Kelly's reminder regarding what baseball has become.

"Velocity doesn't even matter," said the Red Sox reliever, who is currently one of the hardest throwers in baseball. "People make a big deal of it because they don’t play sports. Rick hit it, throwing 96, down the middle, against one of the best pitchers in the game, and even a pitcher can hit it. A lot of people freak out about dunks, and it’s still just two points. Same thing.

"Nobody on the street can throw it 100. That’s why they freak out about it. It’s called sports. You don’t hear baseball players freaking out about it. You just hear from people who don’t play the game."

Not getting overly excited about velocity has become an accepted way of thinking, no doubt. And that's why a guy like Johnson can feel comfortable executing like he did Tuesday night, when the lefty never topped 90 mph.

"The only time I ever look up (at the radar gun reading) is when I knew I reached back a little bit. That’s about it," said Johnson, whose fastball averaged 88 mph. "Other than that I usually look more with my spinning stuff than my fastball. My slider and curveball I look at my velocity much more than my fastball."

So, why are the players so ho-hum when it comes to facing the kind of velocity that used to elicit oohs and aahs? Because, unlike even 10 years ago, it's all over the place.

The days of writing stories about pitchers hitting 100 mph on the radar gun are over. And if they are written, the players aren't about to participate. They have come to know better.

"It’s not Manny Machado saying that," said Kelly of those separating out the hard throwers. "It’s someone who doesn’t play the game or a reporter. Those guys are saying, ‘Joe Kelly, righty reliever who has a changeup.’ The players aren’t saying, ‘Oh, he throws 100.’ Everybody knows that. It’s not Craig Kimbrel because he throws 100, it’s because he has one of the best curveballs in the game. Devers hit 104 against a lefty. That’s not a big deal anymore."

It certainly wasn't for Johnson. The Red Sox are now 8-1 in games he has started. Turns out it doesn't matter how hard you throw.

Eduardo Nunez hit his second home run in the last four games, a three-run shot in the second inning that gave the Red Sox a lead they wouldn't relinquish. The combination of Brock Holt and Nunez continues to be a productive one at second base, as Alex Cora pointed out after the game.