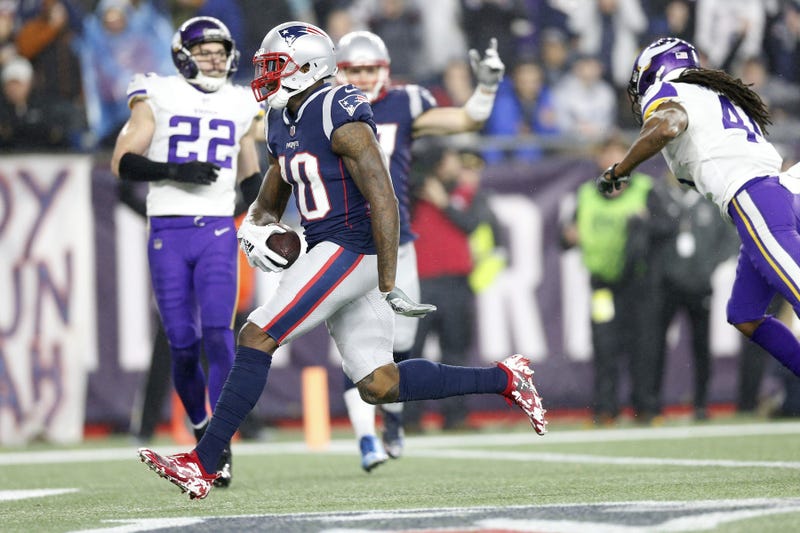 Josh Gordon finished Sunday's game against the Vikings with three catches for 58 yards and a touchdown, but his first catch didn't come until late in the third quarter.

Speaking on a conference call Tuesday, Patriots offensive coordinator Josh McDaniels said that was because the Vikings were giving more of a split safety look early in the game and that limited the throws to the outside.

McDaniels credited Gordon and Tom Brady for staying patient and then making the plays when the situation allowed for it.

"Josh is doing well, working hard, improving each week in practice," he said. "Any time we go into a game, there’s no predetermined target on each play. We have a lot of guys that are out in each pattern. Sometimes the coverage takes away certain parts of the play and the ball goes somewhere else. Sometimes we have multiple people open on a play, but the ball can only go to one of them. So, like I said, I don’t worry too much about those types of things as long as we’re doing the right things and following the process that we want to follow in the passing game, which is to protect the quarterback. Tommy [Brady] reads the play out based on the different coverage looks that we get and then goes to the right place with it, which he almost every time does, which is a great strength of ours. Sometimes guys get targeted and there’s a flurry of them, sometimes there’s a little bit of a lull, but you’re just trying to make sure that we’re moving the ball forward.

"Like I said, most of our pass game, we have multiple people out in the pattern and a lot of it is based on what the defense does. The other night, they chose to play a lot of split-safety zone and take away some things on the outside of the field that opened up some other things, and then they changed some of that up and played some other coverages that gave us some other things. That’s what happens when you play a good defense, and I thought he was very patient, did his job and waited for his opportunities and made the most of them when he got them."

In nine games with New England, Gordon has 34 catches for 605 yards and three touchdowns.