August 6, 2020 08/06/2020 4:48 pm
Midway through the third period of the Lightning's 3-2 win over the Bruins on Wednesday, Tampa Bay forward Barclay Goodrow delivered a scary-looking hit to the head of Boston forward Anders Bjork.

2 minutes for this hit? Alright then pic.twitter.com/8E9oLcihFt

Goodrow was penalized with just a two-minute minor for charging for the play. A scrum broke out after Matt Grzelcyk went after Goodrow in defense of his teammate. And most importantly, and thankfully, Bjork was OK and stayed in the game.

If you were thinking there would be supplemental discipline from the NHL's Department of Player Safety to follow, think again. According to NBC Sports Boston's Joe Haggerty, no such suspension or even fine will be coming.

It's not surprising given the precedent that has been set so far in these play-in and round-robin games, as the league seems to be letting more borderline or even straight-up dirty hits slide with little to no repercussions.

The argument against disciplining Goodrow would presumably center around a combination of Bjork being down on one knee, his head moving as he took the shot, and Goodrow already being committed to the hit before that movement.

Hogwash. Goodrow had Bjork lined up from his blindside for several strides. It was going to be a questionable, potentially dangerous hit even if Bjork remained upright. And once Bjork did drop down to a knee, Goodrow made no attempt to avoid his head and appeared to even lean into it.

More concerning than this one specific decision from the league, though, is the bigger picture of the league's discipline trending in the wrong direction and opening the door for more dangerous hits.

So far the only suspension since the NHL returned was a one-gamer for this hit to the head from Chicago's Drake Caggiula on Edmonton's Tyler Ennis:

Drake Caggiula catches Tyler Ennis with a shoulder in the chin and the only penalty handed out is to Ennis for delay of game. Okay then. pic.twitter.com/6wr6hR0AvX

There have also been a few fines. Vancouver's Micheal Ferland was fined $5,000 for this spear on Minnesota's Ryan Hartman, and Minnesota's Luke Kunin was also fined $1,000 for unsportsmanlike conduct in the same game.

Then Florida's Mike Matheson was fined $2,500 for this high stick on the Islanders' Brock Nelson:

All seemingly fairly straightforward. But it's when you get to the hits to the head, hits from behind and charges where you start to think, "Jeez, they're letting a lot slide, huh?"

The aforementioned Matheson received just a two-minute minor and no supplemental discipline for this hit on Johnny Boychuk:

In a similar play to Goodrow's hit on Bjork, Nashville's Craig Smith also got just a two-minute minor and no further discipline for this hit to the head on Arizona's Conor Garland:

Craig Smith gets two minutes for an illegal check to the head of Conor Garland while he's on one knee. Commits to hit after Garland has fallen pic.twitter.com/BAuSLz6KYL

The Rangers' Jacob Trouba picked Carolina's Justin Williams' head while Williams was in a vulnerable position, but received neither a penalty nor a phone call from the league.

Colorado's Gabriel Landeskog got two minutes and nothing more for this hit from behind on St. Louis' Zach Sanford:

Same goes for this hit from behind by Edmonton's Kailer Yamamoto on Chicago's Connor Murphy:

Really ugly hit by Kailer Yamamoto on Connor Murphy that's a major penalty in virtually any other league. Only ended up being two minutes. Sees him the entire way and comes in with speed pic.twitter.com/MVegacwrGo

Bonus clip: Poor Murphy was also on the receiving end of this apparent slew foot from St. Louis' Brayden Schenn in an exhibition game that went unpunished:

@NHL @NHLPlayerSafety why was this Brayden Schenn Slew Foot on Connor Murphy on Wednesday and was also interference not a suspension?----‍♂️-- pic.twitter.com/ET9ASSG1jH

And lastly, Tuesday night saw Toronto's Kyle Clifford line up Columbus' Dean Kukan, launch off his feet and make head contact. There was no penalty called nor any supplemental discipline to follow. Kukan was forced from the game and won't play Thursday night either.

We could go through each of these individually and try to find ways to defend the league's lack of discipline. Maybe you could even argue that a lot of this is a product of being the first week back after a long layoff -- players' timing isn't there yet, or they're being more aggressive because they need to find a way to generate energy.

But taken together, that's a lot of dangerous hits with very little punishment. It feels like it's going to take a serious injury for the league to start to crack down, which would be a very unfortunate and seemingly avoidable end result. 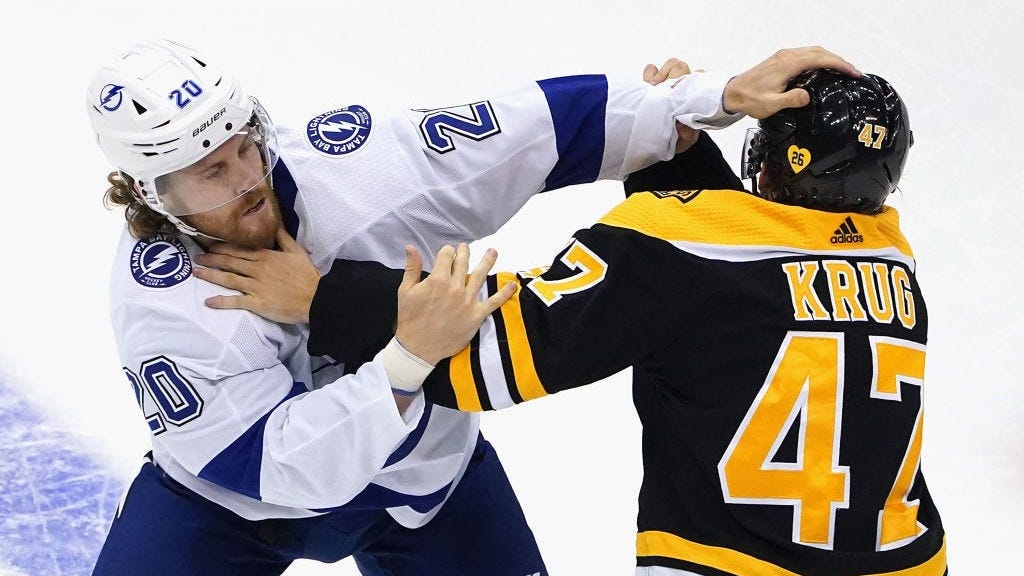