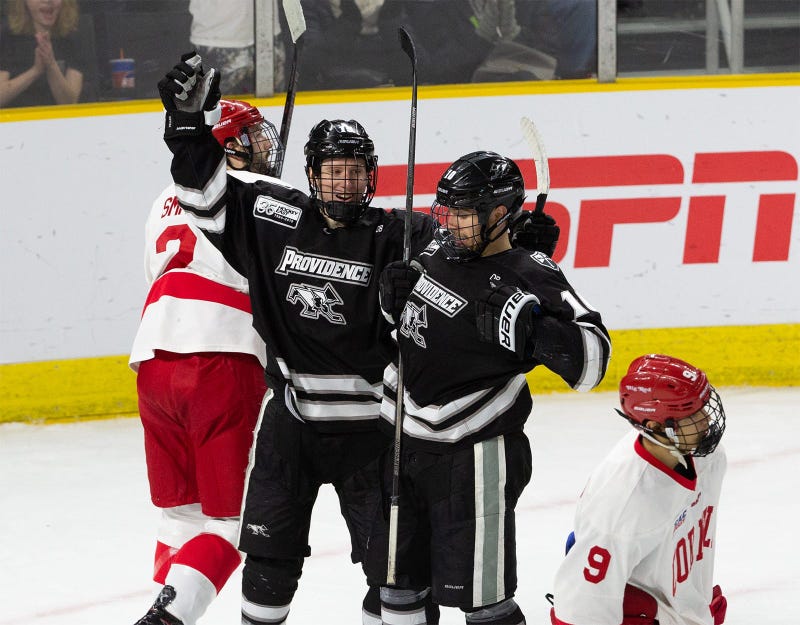 Is history repeating itself?

In 2015, the Providence Friars were one of the best teams in Hockey East all season, but an upset loss in the quarterfinals of the conference tournament put them on the NCAA tournament bubble and forced them to hope the results broke their way in the conference championships the following weekend.

They ultimately got in, got placed in the East Regional in Providence and got to play in front of a hometown crowd despite being a four-seed, won the regional to advance to the Frozen Four, and went on to win the program’s first national championship, beating Boston University in the title game.

This year, the Friars were one of the best teams in Hockey East all season, but an upset loss to Boston College in the conference quarterfinals put them on the NCAA tournament bubble and once again forced them to scoreboard watch and await their fate last weekend.

Once again they held on to one of the final at-large berths, and once again they got placed in the East Regional in -- you guessed it -- Providence and got to play in front of a hometown crowd despite being the lowest-seeded team in the regional.

And once again, the Friars won the regional to advance to their second Frozen Four, beating Minnesota State in the first round and blanking Cornell 4-0 in Sunday afternoon’s regional final.

The Friars getting to play in Providence despite being a four-seed and not being the host of the regional (meaning they aren’t automatically locked in to playing there) has been a topic of much debate in college hockey circles, but the selection committee values attendance and money and atmosphere, and with the regionals consistently being hit-or-miss on that front, having the Friars in Providence ensures there will at least be no issues there.

All that said, it would be disingenuous to argue the Friars won because of where they were playing this weekend. They won because they played by far the best hockey of the four teams there.

After falling behind 3-0 in the first period Saturday against Minnesota State, Providence dominated the rest of the game and scored six straight goals, including three in the third period, to come away with a 6-3 win.

On Sunday, Cornell looked completely overmatched. The Friars were in lockdown mode all afternoon, not only taking away offensive zone time and scoring chances, but taking away even the first pass on attempted breakouts.

Their forecheck frustrated Cornell so much that on multiple occasions the Big Red were forced to hold the puck behind their own net while waiting for something, anything to develop before settling for a hail mary pass into the neutral zone that was easily picked off.

The Friars held the Big Red to just 19 shots on goal in the game, with nine of those coming in the third period when the game was already out of reach.

The Friars opened the scoring 10:20 into the game when Cornell goalie Austin McGrath mishandled Jacob Bryson’s soft shot from the point, leading to a juicy rebound that Greg Printz banged home.

Providence strikes first!Greg Printz battles in front and finds himself in perfect position to clean up the rebound to give @FriarsHockey the 1-0 lead.1st Period | PC 1 | CU 0#NCAAHockey pic.twitter.com/5cNg91Adgj

They doubled their lead 1:36 into the second following a great offensive zone possession from their top line of Kasper Bjorkqvist, Josh Wilkins and Jack Dugan. After some good team cycling, Dugan did some solo cycling by skating a full lap around the offensive zone before throwing the puck on net. A scramble in the crease ensued and Wilkins eventually knocked it in for his third goal of the weekend.

Jack Dugan wheels around the offensive zone, throws it on net, and Josh Wilkins is there to take it home for @FriarsHockey's second goal of the game.2nd Period | PC 2 | CU 0#NCAAHockey pic.twitter.com/1VDXvAbmzJ

If there was one negative on the weekend for Providence, it came when Bjorkqvist appeared to injure his arm later in the game when he got tangled up with a Cornell player. He was ruled out for the remainder of the game, and while we don’t know anything about his status for the Frozen Four yet, it would certainly be a big loss if he couldn’t go. (UPDATE: Providence coach Nate Leaman said after the game that Bjorkqvist would be ready to go for the Frozen Four.)

The way the game was going, a two-goal lead already seemed insurmountable. But just for good measure, the Friars added a third with less than a second left in the second period when Wilkins set up Scott Conway for a nice redirect in the slot for a power-play goal. Brandon Duhaime finished off the scoring with an empty-netter late in the third.

Scott Conway deflects the puck past McGrath with less than a second remaining in the period for the @FriarsHockey power play goal!2nd Intermission | PC 3 | CU 0#NCAAHockey pic.twitter.com/3ROkgijTMa

So yeah, complain about where they were playing if you want. The Friars would’ve won this regional anywhere with how much better they played than the other three teams there.

Now they’re heading to the Frozen Four in Buffalo, where they’ll be looking for their second national championship in five years. The Friars will face the winner of Sunday night’s Midwest Regional final between Quinnipiac and the defending national champs, Minnesota-Duluth. The other national semifinal will feature Hockey East mates UMass taking on Denver.