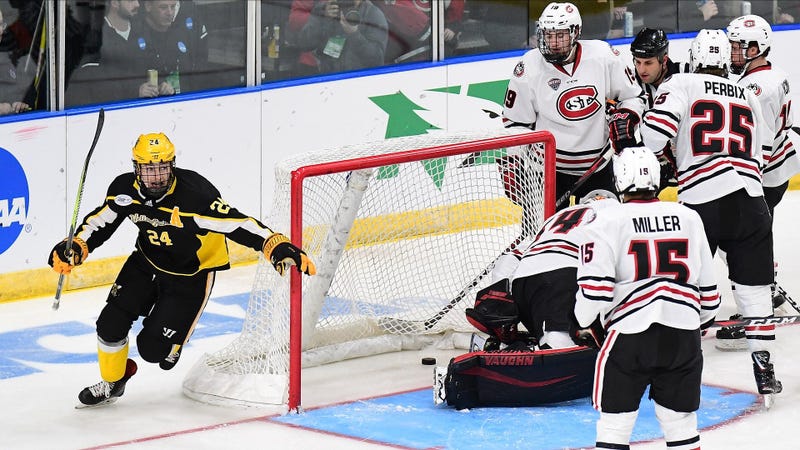 If you didn’t know that Springfield’s American International College -- a school with fewer than 1,500 undergrads -- had a Division I college hockey team, you’d be forgiven. For most of their 21 seasons in Division I, there’s been little reason for anyone outside of college hockey die-hards to care or pay attention.

You should be paying attention now, though, because the Yellow Jackets just pulled off one of the biggest upsets in college hockey history in their first-ever NCAA tournament game, beating No. 1 overall seed St. Cloud State 2-1, and are now one win away from the Frozen Four.

But this first tops them all. By virtue of being the lowest-seeded team in the tournament, AIC drew top-seeded St. Cloud State, a team that has dominated all season and came in with a 30-5-3 record, and had to travel out to Fargo, North Dakota for the West Regional.

Just getting that far was more than enough to make this the best season in AIC history, but the Yellow Jackets clearly wanted more. They came to play, and that was evident right off the bat when they got a few early chances.

Then they took a 1-0 lead 6:01 into the game when junior forward Joel Kocur won a 1-on-1 battle down low and jammed the puck between St. Cloud goalie David Hrenak and the post.

College hockey Twitter took notice. A few semi-sarcastic, semi-serious “upset alert” tweets were fired off. St. Cloud’s past struggles in the NCAA tournament were quickly brought up -- the Huskies are just 5-15 all-time in NCAAs despite having all kinds of loaded teams over the years, and they lost in the first round as the No. 1 overall seed just last year when they fell to another Atlantic Hockey team (Air Force).

But AIC’s early goal wasn’t just some blip. It wasn’t against the grain of play. St. Cloud struggled to get anything going and finished the first period with just six shots on goal while still trailing 1-0.

The second period began as more of the same -- pretty even play, with AIC not allowing the Huskies to make any kind of real push. Then, incredibly, the Yellow Jackets made it 2-0 at the 7:32 mark of the second when sophomore defenseman Brennan Kapcheck pinched in from the point and fired a shot that squeaked through Hrenak’s five-hole and trickled over the line.

Now the pressure was really on. St. Cloud woke up a little bit and outshot AIC 13-4 in the second, but the Yellow Jackets still weren’t really getting peppered. Their team defense did a good job taking away high-quality chances, and the few the Huskies did get were erased by junior goalie Zackarias Skog, one of 10 European-born players on a team that has truly embraced the “International” part of its name.

The one area where the Yellow Jackets played with fire throughout the game was penalties. They gave St. Cloud’s seventh-ranked power play four chances, and finally got burned on the fourth when Easton Brodzinski’s centering pass deflected off an AIC defender and past Skog to cut the lead to 2-1 with 10:33 left in the game.

The Huskies really turned up the heat late in the third as they hunted for the tying goal, especially after they pulled their goalie for the extra attacker in the final minutes. But Skog -- who it’s worth noting had a subpar .896 save percentage entering the game -- stood on his head and made one big save after another, including three in a span of seconds during one net-front scramble with 1:16 to go.

With seconds and minutes feeling like an eternity as the Yellow Jackets tried to hang on, the final buzzer finally came and the AIC bench exploded. The celebration for one of the biggest upsets in college hockey history was underway.

AIC will now face Denver (who beat Ohio State earlier Friday) in the regional final Saturday at 9 p.m. ET on ESPNU, with the winner of that game advancing to the Frozen Four in Buffalo. The Yellow Jackets will once again be clear underdogs as they face a team that has been in two of the last three Frozen Fours, but hey, they weren’t supposed to have a chance against St. Cloud either.

It was a good night all-around for western Massachusetts, as UMass also won its tournament opener, beating Harvard 4-0 in the Northeast Regional in Manchester.

The Minutemen pretty much controlled play start to finish, as they outshot the Crimson 36-17. It took until the third period for that dominance to really translate to the scoreboard, though. A pair of goals from John Leonard and Brett Boeing 1:47 apart midway through the period turned a 1-0 game into a 3-0 lead, and an empty-netter from Boeing sealed UMass' second-ever NCAA tournament win and first since 2007.

It was an impressive bounceback effort for UMass after the Hockey East regular-season champs laid an egg in the Hockey East semifinals last Friday and lost 3-0 to an under-.500 Boston College team.

UMass will face Notre Dame -- who beat Clarkson in overtime Friday night -- in the regional final Saturday at 6:30 p.m. on ESPNU.

Three more New England teams open their NCAA tournaments on Saturday. Providence faces Minnesota State in the East Regional in Providence at 1 p.m., followed by Northeastern taking on Cornell in the same regional at 4:30. Both of those games are on ESPNews. Then at 7:30 on ESPN3, Quinnipiac faces NCAA tournament newcomers Arizona State in the Midwest Regional in Allentown, Pennsylvania.